Ongoing dissatisfaction with the country’s economy has not led Mexicans to reject international trade. Indeed, about eight-in-ten say trade is good for Mexico and nearly as many say it is good for them personally. Moreover, support for trade is up over the last year.

Still, many voice concerns about aspects of globalization. The belief that government should protect the country’s national interests, even if other countries object, is widely shared. And a significant minority has doubts about the benefits of the free market. 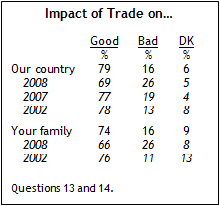 Fully 79% say growing trade and business ties between Mexico and other nations is good for Mexico, up from 69% last year. Only 16% believe trade is bad for Mexico, down from 26% in 2008.

Most also believe they benefit personally from trade – 74% say growing trade and business ties are good for themselves and their families, up from 66% in last year’s survey. Just 16% say trade is bad for them, a 10 percentage point drop from last year.

Tepid Embrace of the Free Market

About half of Mexicans (52%) agree with the statement “Most people are better off in a free market economy, even though some people are rich and some are poor,” while 41% disagree. 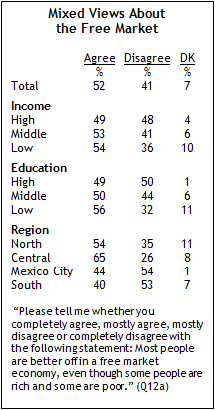 Views about the free market are generally positive in the central (65% agree) and north (54%) regions, while support for the free market is much lower in Mexico City (44%) and the south (40%).

Most Mexicans See Better Life in U.S. - One-In-Three Would Migrate Chapter 1. Immigration and Life in the United States Chapter 2. The Campaign Against Drug Traffickers Chapter 3. Views of National Conditions and the Economy Chapter 4. Ratings of Leaders and Institutions Chapter 5. Attitudes Toward the United States Chapter 6. Attitudes Toward President Barack Obama
Chapter 7. Views on Trade and Globalization
Support for Trade ReboundsTepid Embrace of the Free MarketConcerns About Foreign Influence
Chapter 8. Views of Personal Life Survey Methods