A majority of Mexicans give President Felipe Calderón high marks. Moreover, the survey shows that most believe that the president, national government and the military are having a positive impact on the way things are going in their country. The court system and the police receive less favorable reviews. 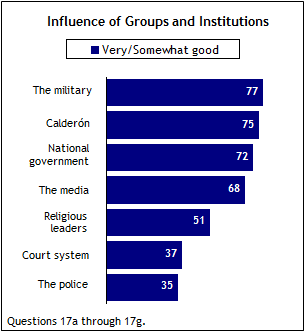 Nearly seven-in-ten (68%) Mexicans express a favorable opinion of Calderón, while only about three-in-ten (29%) have an unfavorable view of the president.4 Positive opinions of Calderón are widespread across most demographic groups, and more than eight-in-ten (82%) of those who identify with his National Action Party (PAN) give him a positive rating. Moreover, the president’s popularity extends across party lines – 63% of those affiliated with the PRI express a positive view of Calderón.

Majorities in all four regions express favorable views of the president, but opinions about him are more negative in the capital. About four-in-ten (41%) in Mexico City have an unfavorable view of Calderón, compared with 28% in the north, 24% in the central region and 21% in the south.

Nearly half of Mexicans (47%) express a positive opinion of Beatriz Paredes Rangel, president of the Institutional Revolutionary Party (PRI), while roughly one-third (32%) say they have an unfavorable view of her, and 21% do not offer an opinion. Paredes garners much stronger support from members of her own party – 60% of those who are affiliated with the PRI offer a positive opinion of their party’s leader, compared with 46% of those who are affiliated with the PAN.

Views of the president of the Party of the Democratic Revolution (PRD), Jesús Ortega Martínez, are divided. About as many say they have a favorable opinion of Martínez (37%) as say they have an unfavorable opinion of him (35%). About three-in-ten (28%) are unable to offer an assessment of the leader of the PRD, and those in the north, south and central regions are particularly unfamiliar with him. In the capital city, where Martínez is more well-known, nearly half (49%) give him a positive rating.

Next: Chapter 5. Attitudes Toward the United States
← Prev Page
Page1Page2Page3Page4You are reading page5Page6Page7Page8Page9Page10
Next Page →

Most Mexicans See Better Life in U.S. - One-In-Three Would Migrate Chapter 1. Immigration and Life in the United States Chapter 2. The Campaign Against Drug Traffickers Chapter 3. Views of National Conditions and the Economy
Chapter 4. Ratings of Leaders and Institutions
Views of Groups and InstitutionsRating Political Leaders
Chapter 5. Attitudes Toward the United States Chapter 6. Attitudes Toward President Barack Obama Chapter 7. Views on Trade and Globalization Chapter 8. Views of Personal Life Survey Methods