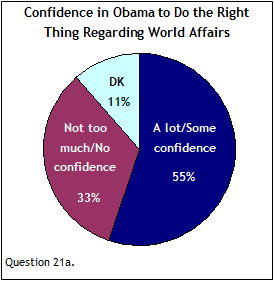 A majority of Mexicans express confidence in Barack Obama to do the right thing regarding world affairs, and about as many credit Obama’s election with improving their opinion of the United States. Mexicans have considerably more confidence in Obama than they did in his predecessor, George W. Bush. 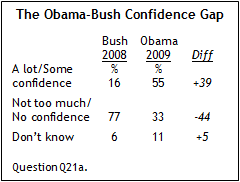 Mexicans are largely unfamiliar with the other Western leaders included in the survey; majorities express no opinion about French President Nicolas Sarkozy (52%) and German Chancellor Angela Merkel (54%). Venezuelan President Hugo Chavez is broadly unpopular among Mexicans – more than six-in-ten (63%) say they do not have confidence in the Venezuelan leader to do the right thing regarding world affairs. 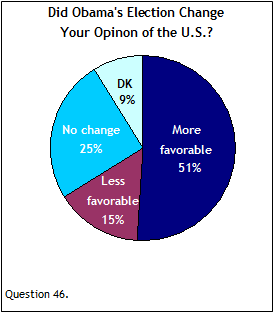 Compared with publics in the other two Latin American countries included in the survey – Brazil and Argentina – Mexicans are much less likely to say that Obama’s election improved their opinion of the U.S. More than three-quarters in Brazil (77%) and 61% in Argentina say that is the case. Publics in all of the Western European and African countries surveyed, as well as in most Asian countries, are also more likely than Mexicans to say the election changed their opinion of the U.S. for the better. 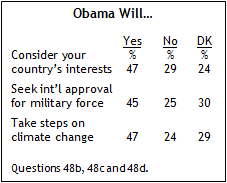 Pluralities of Mexicans expect Obama to approach international policymaking in a multilateral fashion. Just under half say Obama will take the interests of countries like Mexico into account when making foreign policy decisions (47%), and about the same number (45%) say the U.S. president will seek international approval before using military force. Similarly, about half (47%) expect Obama to take significant measures to control global climate change. Close to six-in-ten (56%) Mexicans say they approve of Obama’s international policies overall, while 17% disapprove.

Next: Chapter 7. Views on Trade and Globalization
← Prev Page
Page1Page2Page3Page4Page5Page6You are reading page7Page8Page9Page10
Next Page →