Some of the countries where COVID-19 has been deadliest – including the United States and Italy – have populations that skew considerably older than the global average, according to a Pew Research Center analysis of United Nations data. 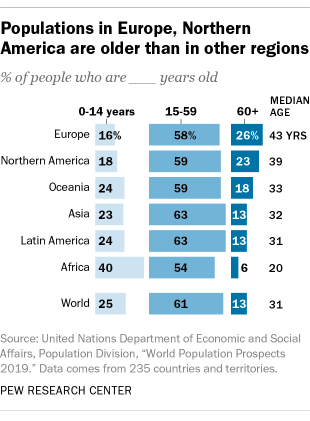 People who are 60 and older appear to be especially vulnerable to the virus, while children appear to be less susceptible to it. Adults younger than 60 often have been affected by COVID-19, too, but they generally have been less likely than older people to die from it.

Globally, much of the population is quite young, with a median age of about 31. (In other words, if you lined up everyone in the world by age, the people in the middle would be 31.) But median age varies considerably by region and country, as do the shares of each age group in any given place.

Europe, Northern America and wealthy countries in Asia have the oldest inhabitants, while Africa has by far the youngest. Countries with older populations tend to be more economically developed, resulting in better nutrition, health care services and government support in retirement. In these countries, people tend to have fewer children and to live longer. In poorer countries, meanwhile, fertility is higher and people more often die in young adulthood as a consequence of war or from infectious diseases and complications related to childbearing.

Here is a closer look at how median ages and age distributions vary by region and country. You can also scroll directly to each region using the links below. (This analysis uses regional classifications from the UN, which differ from those used in other Pew Research Center reports.)

The global coronavirus pandemic has been especially deadly for older people. To examine how different regions and countries vary by age, this analysis relies on data from the United Nations’ “World Population Prospects 2019.” The report includes population estimates from 1950 to the present for 235 countries and territories. The 2019 revision also presents population projections from the present until 2100.

We use population estimates (e.g. median ages and population by five-year age groups) for the year 2020. For more information, see the full UN report, data tables and its methodology. 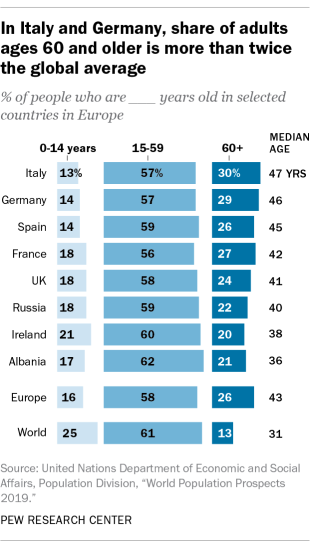 The coronavirus spread quickly in Europe in March and April, leading to particularly high fatality counts in Spain and Italy. Europe has the oldest population of any region: It has the biggest share of people ages 60 and older, the smallest share of children under 15 and a median age of 43 years. That’s almost 12 years older than the global median.

Of the 20 countries and territories worldwide with the highest median ages, 14 are in Europe – led by Italy, Portugal and Germany. In fact, Italy trails only Japan when it comes to the world’s highest median age and the share of those ages 60 and older.

Even Albania, which has the lowest median age (36) of the European countries measured by the UN, is fairly old in a global comparison. And while Albania is the region’s youngest country as measured by median age, Ireland is the country with the largest share of people under 15, at 21% of its population.

Europe’s age structure is the result of decades of relatively high life expectancy and low fertility. European countries rank high on the UN Human Development Index, which measures health, education and wealth. And due to advanced health care systems, it hasn’t been very common for Europeans to die from infectious diseases – even though the region has been hit hard by COVID-19. 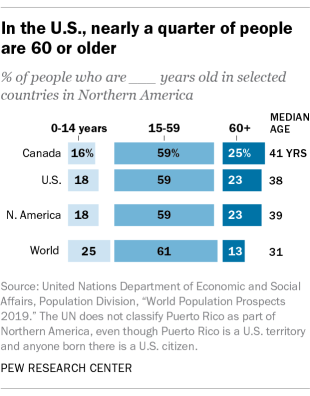 Northern America is the region with the second oldest population worldwide. It has a median age of 39, almost eight years older than the global median.

The only sovereign nations the UN includes in this region are the U.S. and Canada; Mexico is included as part of Latin America, as are the U.S. territories of Puerto Rico and the U.S. Virgin Islands. Territories with smaller populations such as Greenland and Bermuda are included in the Northern America total but not reported separately.

The U.S., currently the country with the highest COVID-19 fatality rate outside of Europe, has a median age of 38, and almost a quarter of its population (23%) is 60 or older. As in Europe, the high share of older Americans has been fueled by high life expectancy and relatively low fertility rates.

Women – who, according to initial research, are somewhat more likely to recover from the novel coronavirus – account for a slightly larger share of the 60 and older age bracket in the U.S. than men: A quarter of American women are in this age range, compared with 21% of U.S. men. 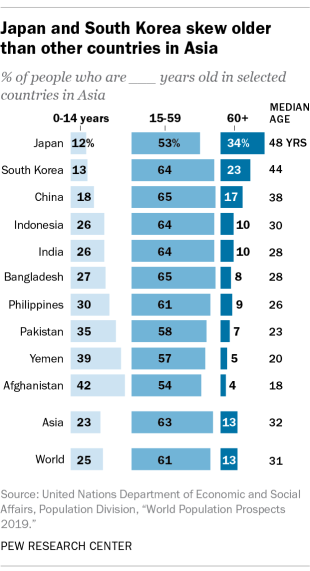 Asia’s age distributions are close to the global averages. That’s in part because Asia accounts for more than half of the world’s population, but also because countries in the region range from relatively young ones (Afghanistan) to the world’s oldest (Japan).

Japan has a median age of 48 – more than 17 years above the global figure – and about a third of its inhabitants (34%) are 60 or older. In South Korea, another economically advanced country, the median age is 44 and nearly a quarter of the population (23%) is 60 or older. Both countries have very low fertility and unusually high life expectancies. And even though both countries have recently reported a “second wave” of coronavirus cases, the fatality rates there so far have been relatively low.

In China, where the coronavirus pandemic began, the median age (38) is much younger than in Japan or South Korea, but still comparatively old for the region. Only 18% of people in China are younger than 15. This may be partially due to a “one-child policy” enforced by the Chinese government for several decades starting in 1979.

Asia’s other most populous countries – Pakistan, the Philippines, India, Bangladesh and Indonesia – all have median ages of 30 or younger. In these five countries, a quarter or more of people are below the age of 15.

The region’s youngest populations are in the relatively poor countries of Afghanistan (median age 18) and Yemen (20), where high death rates from recent and ongoing wars have thinned the adult population. Only about 5% of the population in these countries is 60 or older. 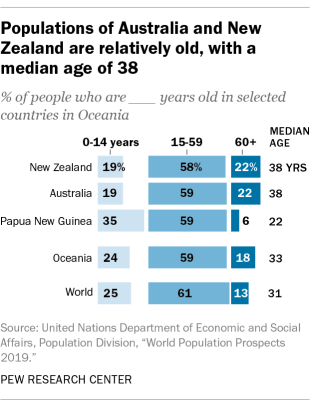 Latin America and the Caribbean

In Latin America and the Caribbean, the median age is 31, almost identical to the global median. About a quarter of Latin Americans (24%) are below the age of 15, and 13% are 60 or older. 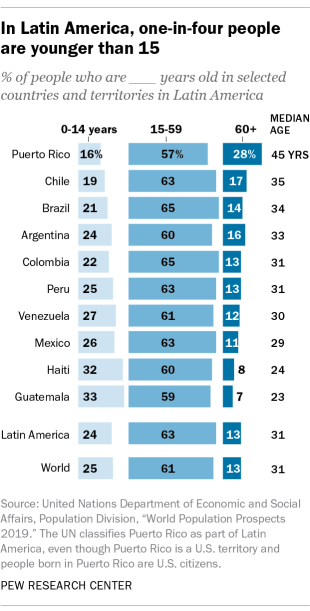 Brazil, the region’s most populous country, is slightly older than its neighbors, with a median age of 34, though only about 14% of its population is 60 or older.

As measured by median age, the oldest populations in Latin America and the Caribbean are in Puerto Rico (45) and Martinique (47) – territories under the jurisdictions of the U.S. and France, respectively. Chile, one of the region’s wealthiest countries, also has a relatively high median age at 35.

Argentina, Colombia, Peru, Venezuela and Mexico all have median ages close to the global figure.

Guatemala stands out for having the region’s youngest population, with a median age of 23, followed by Haiti and Honduras (both at 24). In these countries, 8% or less of the population is 60 or older. These countries stand out for their relatively low per-capita GDP and low average life expectancies. 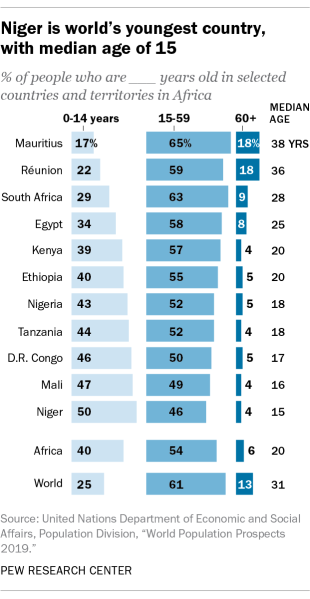 Africa has the youngest population of any region, with a median age of 20 – roughly a decade less than the global figure. All but one of the 20 countries with the lowest median ages are in Africa. (The exception is Afghanistan.) Four-in-ten Africans are below the age of 15 and just 6% are 60 or older.

Niger, in Western Africa, has the world’s youngest population. Half of Niger’s population is 14 or younger, and the median age is 15. Niger is one of the world’s poorest countries and ranks last on the UN Human Development Index. The fertility rate in Niger is the world’s highest, and life expectancy is among the world’s lowest. Like its neighbors Mali and Burkina Faso, Niger is burdened by escalating military conflicts.

Countries in Central and Eastern Africa, such as the Democratic Republic of the Congo and Kenya, also have low median ages (between 17 and 20).

Nigeria, Africa’s most populous nation, has a median age of 18 and only 5% of its people are 60 or older. Compared to other large African nations, Egypt and South Africa have older populations, with median ages of 25 and 28, respectively. Egypt has a noticeably higher average life expectancy than other African nations, and both countries rank higher than their neighbors on the UN Human Development Index.

Africa’s oldest populations are in the Indian Ocean islands of Mauritius and Réunion (a French territory), with median ages of 38 and 36, respectively. In these islands, nearly a fifth of the population is 60 or older. Mauritius has one of the region’s highest per-capita gross domestic products and life expectancies.

Younger people are less religious than older ones in many countries, especially in the U.S. and Europe
8 charts on internet use around the world as countries grapple with COVID-19
With billions confined to their homes worldwide, which living arrangements are most common?
Views of Russia and Putin remain negative across 14 nations
More than half of U.S. households have some investment in the stock market
So far, Trump has granted clemency less frequently than any president in modern history
Biden Begins Presidency With Positive Ratings; Trump Departs With Lowest-Ever Job Mark
Almost all U.S. presidents, including Trump, have been Christians
How we know the drop in Trump’s approval rating in January reflected a real shift in public opinion
What Biden and Trump voters say they want the other candidate’s supporters to know about them