Below are five facts about Fox News and how Americans feel about it. All findings are based on recent surveys from Pew Research Center’s Election News Pathways project, which focuses on what Americans hear, perceive and know about the 2020 presidential election and how these attitudes relate to how and where they get news. (You can use this interactive tool to explore the data from these surveys yourself.)

Everyone who took part in the surveys is a member of the Center’s American Trends Panel, an online survey panel that is recruited through national, random sampling of residential addresses. Recruiting our panelists by phone or mail ensures that nearly all U.S. adults have a chance of selection. This gives us confidence that any sample can represent the whole population (see our Methods 101 explainer on random sampling). To further ensure that each survey reflects a balanced cross section of the nation, the data is weighted to match the U.S. adult population by gender, race, ethnicity, partisan affiliation, education and other categories.

1Around four-in-ten Americans trust Fox News. Nearly the same share distrust it. Among all U.S. adults, 43% say they trust Fox News for political and election news – similar to the shares who say they trust CBS News (45%) and PBS (42%), according to a November 2019 survey. At the same time, 40% of adults say they distrust Fox News – the highest share out of the 30 media outlets asked about in the survey, ahead of CNN (32%) and the Rush Limbaugh radio show (29%).

The vast majority of adults (94%) have heard of Fox News. And as of last November, 39% said they had gotten political news there in the past week – tied with CNN among the outlets asked about. 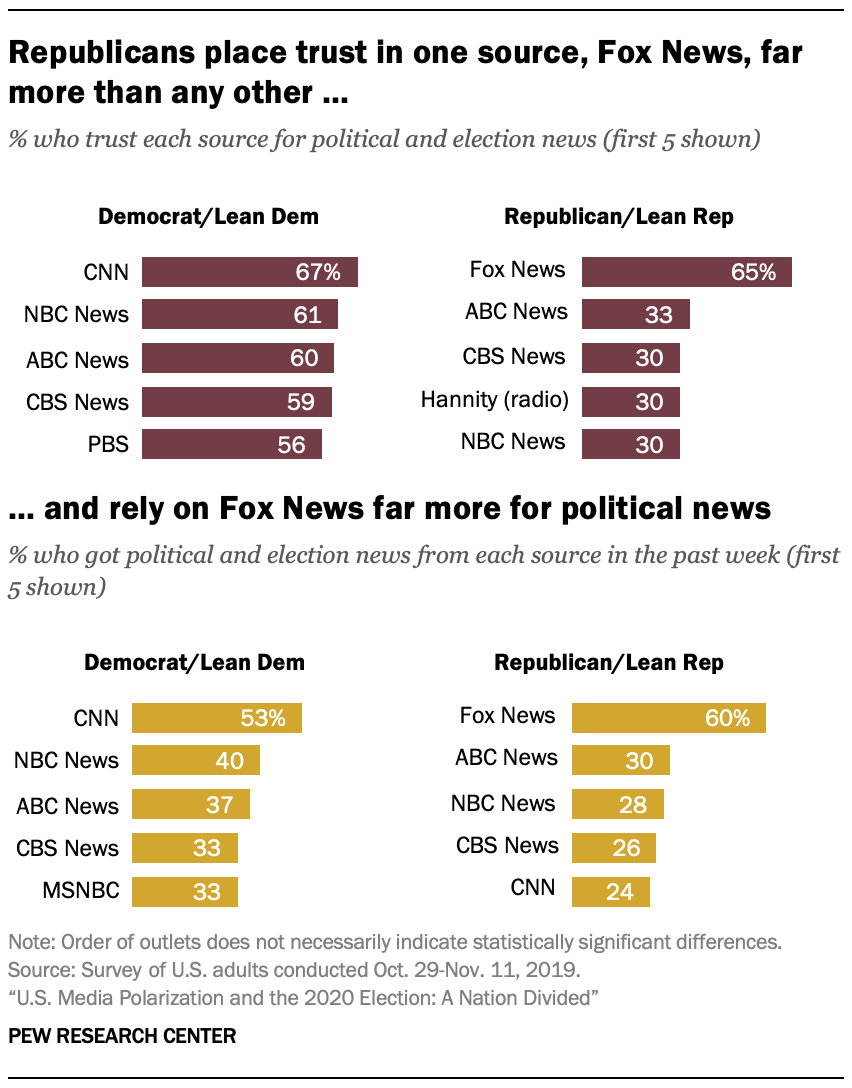 Among Democrats and Democratic-leaning independents, 61% say they distrust Fox News for political news. That’s considerably higher than the shares of Democrats who distrust other outlets, including the Rush Limbaugh and Sean Hannity radio shows (43% and 38%, respectively) and Breitbart News (36%) – though this also reflects the fact that Fox News is more well-known to the public than these other outlets. Liberal Democrats are far more likely than conservative or moderate Democrats to say they distrust Fox news (77% vs. 48%).

While most Democrats distrust Fox News, that doesn’t mean they universally tune it out. Around a quarter of Democrats (23%), including 29% of conservative or moderate Democrats and 15% of liberals, said in November that they had gotten political news from Fox News in the past week.

3On an ideological scale, the average Fox News consumer is to the right of the average U.S. adult, but not as far to the right as the audiences of some other outlets. As part of the November survey, the Center grouped the audiences of 30 news outlets on a scale based on the self-described ideology and partisanship of those who said they had gotten political news from each outlet in the past week. (You can read more about this classification system in this Q&A.) Based on this scale, the average audience member for Fox News is more likely than the average U.S. adult to be conservative and Republican. But the average audiences for four other outlets in the study – the Daily Caller, Breitbart News, and the Sean Hannity and Rush Limbaugh radio shows – are to the right of the average Fox News viewer. 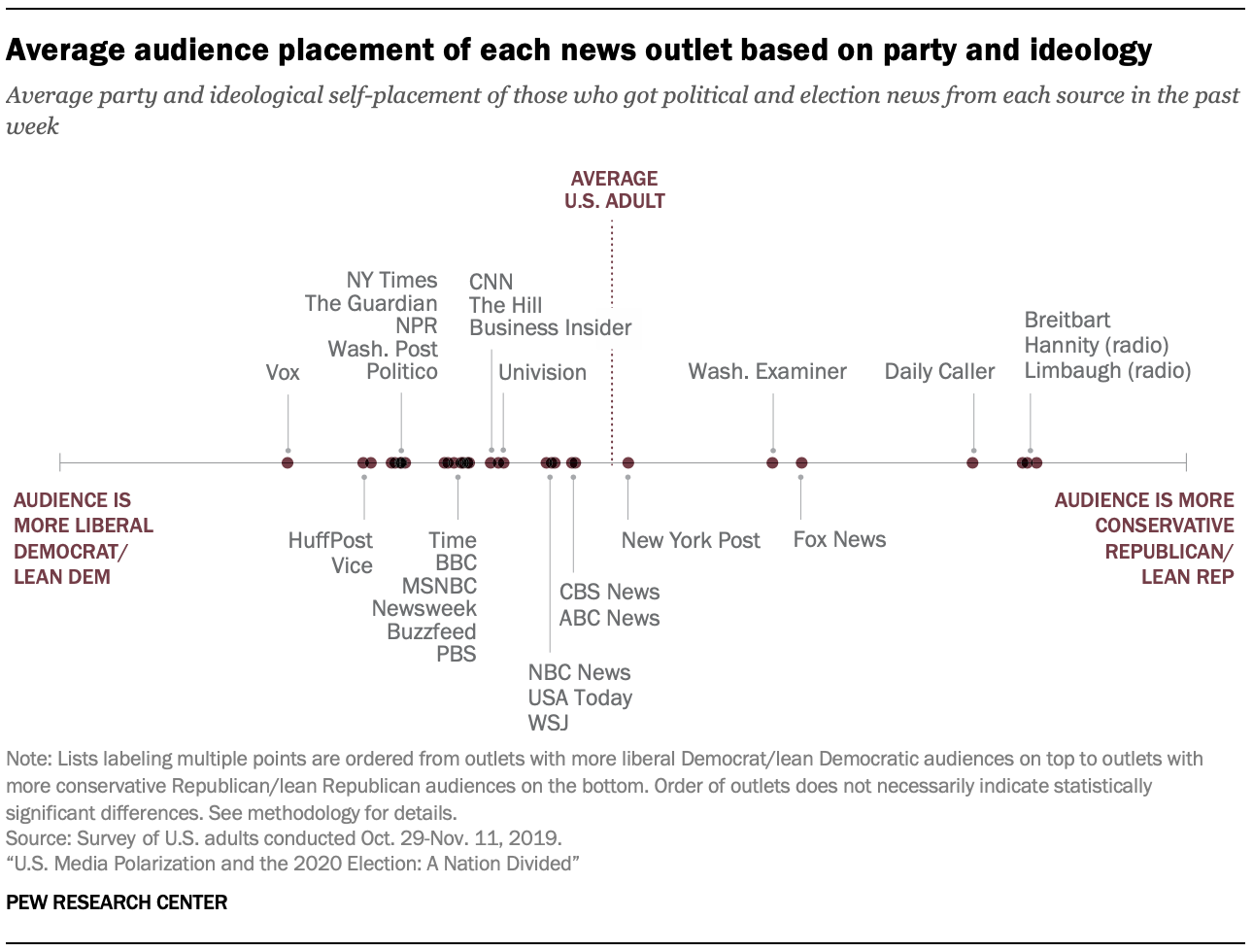 4People who cite Fox News as their main source of political news are older and more likely to be white than U.S. adults overall. Americans ages 65 and older account for around four-in-ten of those who say their main source is Fox News (37%), compared with 21% of all adults, according to the November survey. And around nine-in-ten who turn to Fox News (87%) identify their race and ethnicity as non-Hispanic white, compared with 65% of all adults. 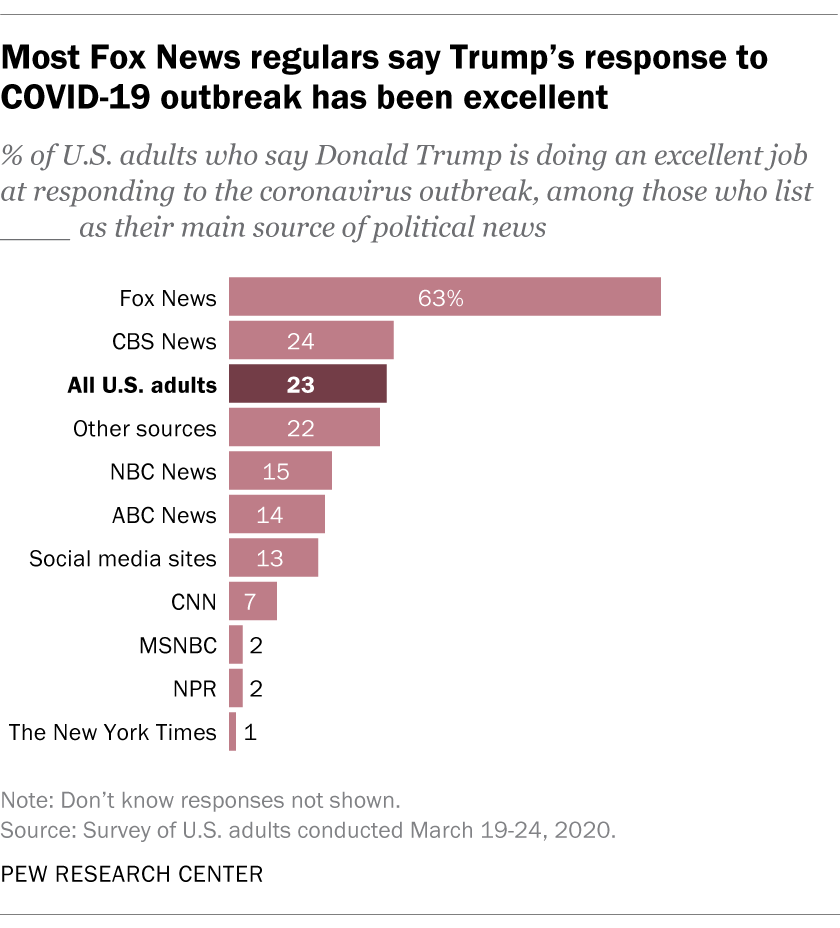 5Those who name Fox News as their main source of political news stand out in their views on key issues and people, including President Donald Trump. Fox News consumers tend to have an especially positive view of the president, which may not be a surprise given that 93% of those who name the network as their main source of political news identify as Republican or lean to the party.

One striking example is in perceptions of Trump’s handling of the coronavirus outbreak. In a March 2020 survey, 63% of those whose main source of political and election news is Fox News said Trump is doing an excellent job responding to the outbreak. No more than a quarter of those who cited other news outlets as their main source of political news said this. Fox News regulars were considerably more likely than Republicans overall to describe Trump’s handling of the outbreak as excellent (63% vs. 47%).

In the November 2019 survey, 71% of those who cited Fox News as their main source of political news gave Trump a very warm rating on a “feeling thermometer” ranging from 0 to 100, where 0 represents the coldest, most negative rating and 100 represents the warmest, most positive. Among all U.S. adults, just a quarter gave Trump a very warm rating (between 76 and 100).

Note: For facts about Fox News in 2014, see this earlier post by Jesse Holcomb, a former associate director of research.