As President Donald Trump gears up to deliver his 2020 State of the Union address, evaluations of his signature foreign policies generally are negative around the world, according to a new analysis of a spring 2019 Pew Research Center survey. Similar to the lack of confidence that many people outside the United States express in Trump’s performance as a world leader, respondents in many countries disapprove of his international policymaking.

Majorities in most of the 33 non-U.S. countries surveyed disapprove of the U.S. increasing tariffs on imported goods from other countries (median 68% disapproval), its withdrawal from international climate change agreements (66%), and its construction of a wall on the border between the U.S. and Mexico (60%). Trump’s position of allowing fewer immigrants into the U.S. and his administration’s withdrawal from the Iran nuclear deal also are met with negativity: Across all countries surveyed, medians of 55% and 52%, respectively, disapprove of these steps. 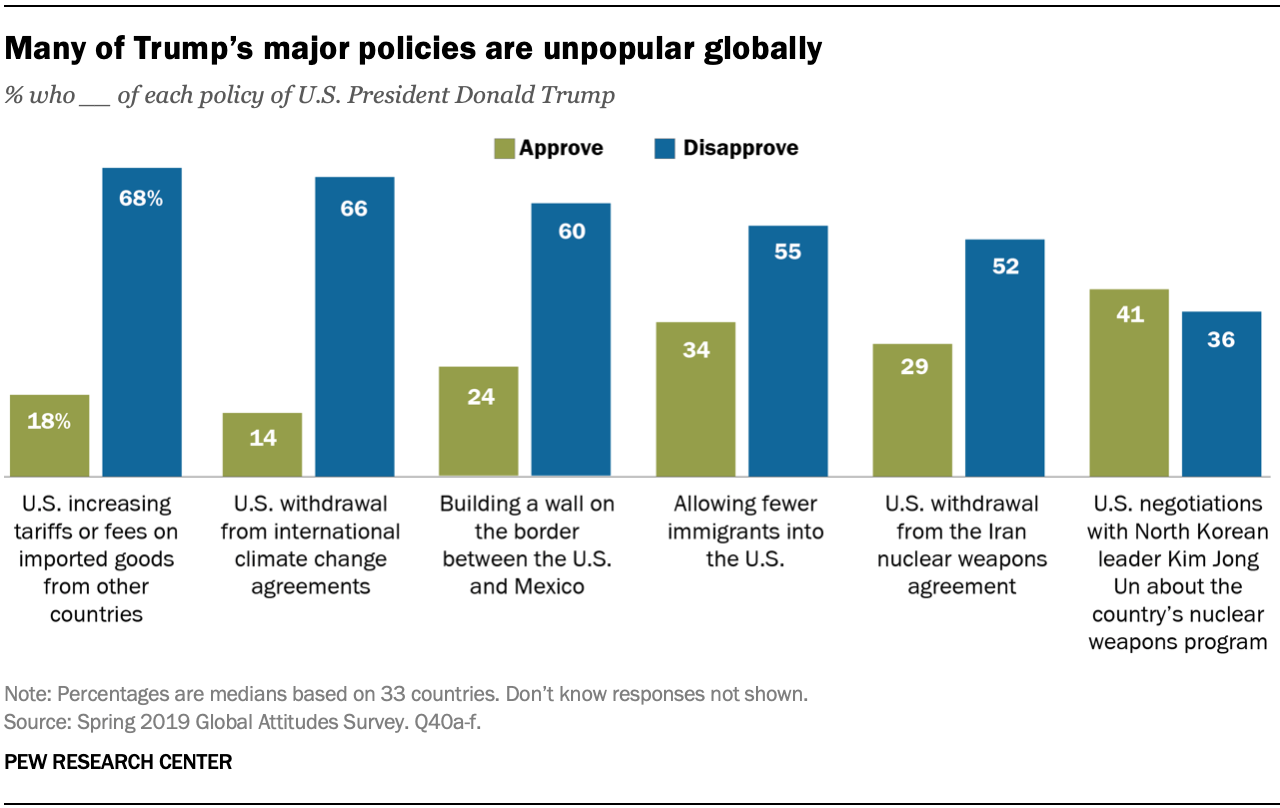 Among all of his signature foreign policies, Trump’s negotiations with North Korean leader Kim Jong Un are seen most positively. A median of 41% across the surveyed countries express approval, making it the only policy asked about with a higher median approval than disapproval figure.

We used data from a survey conducted in 34 countries from May 13 to Oct. 2, 2019, totaling 38,426 respondents. The surveys were conducted face to face across Africa, Latin America, the Middle East and South Asia, and on the phone in North America and the Asia-Pacific region. Across Europe, the survey was conducted over the phone in France, Germany, the Netherlands, Spain, Sweden and the UK, but face to face in Central and Eastern Europe, Italy, Ukraine and Russia.

Here are the relevant questions used in the survey, along with responses and the survey’s methodology.

Israel stands out in approval of Trump’s policies

To examine support for Trump’s policies in a different way, we also created an approval index across the six policies asked about in the survey. If a respondent approved of a given policy, we coded the response as 1; if the respondent disapproved, we coded it as -1. (“Don’t know” responses were coded as 0.) We then summed the responses across all of the policies, creating an index ranging from 6 (approval of all six) to -6 (disapproval of all six). 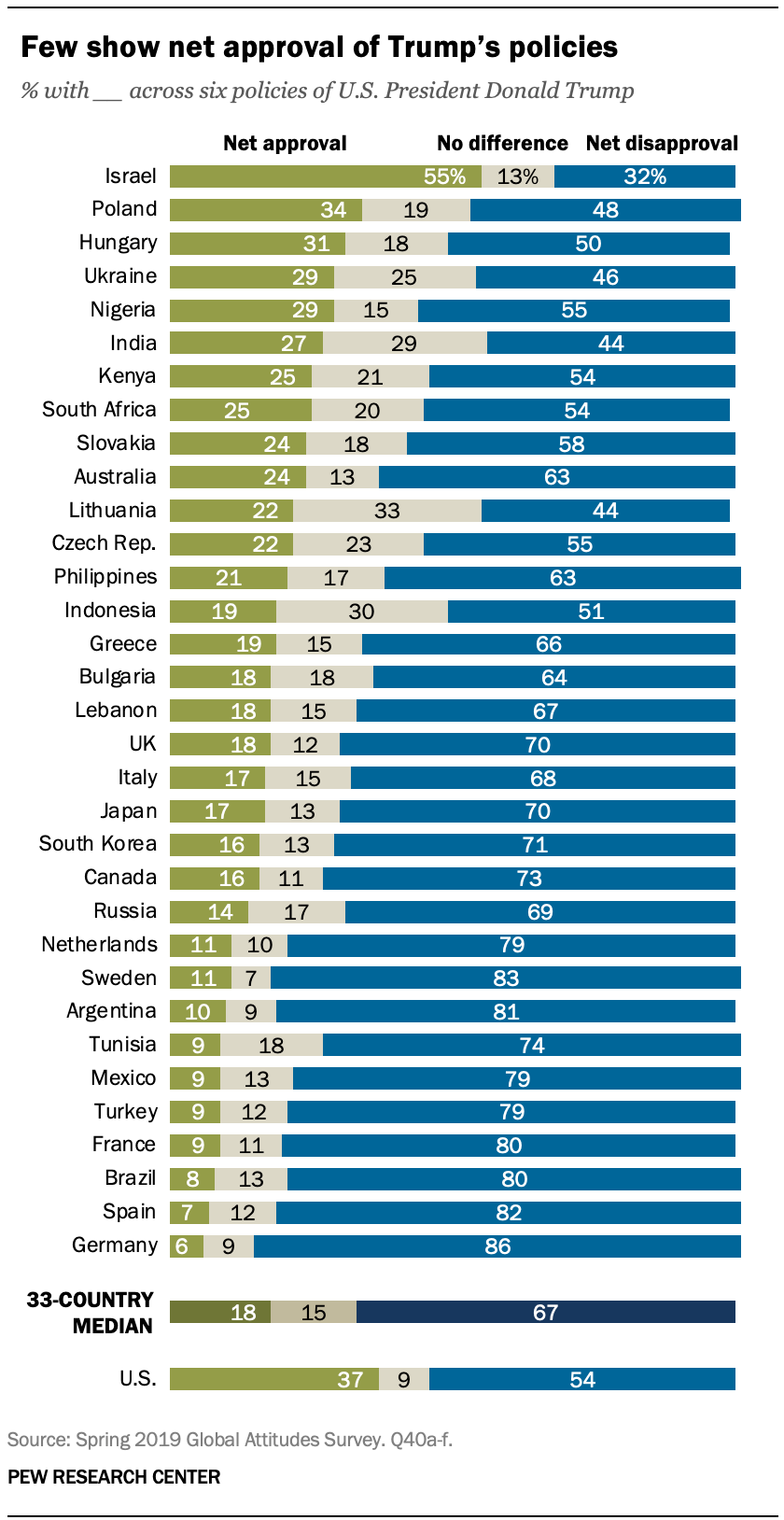 Israel is the only surveyed country where a majority of people (55%) express net approval of Trump’s policies. In fact, the share of net approvers is 18 percentage points higher in Israel than it is in the U.S., the second-most-approving country included in the survey.

Net approval for Trump’s policies is particularly low in several countries in Western Europe, Latin America, the Middle East and North Africa. Only about one-in-ten or fewer approve of more Trump policies than they disapprove of in the Netherlands, Sweden, Argentina, Tunisia, Mexico, Turkey, France, Brazil, Spain and Germany. 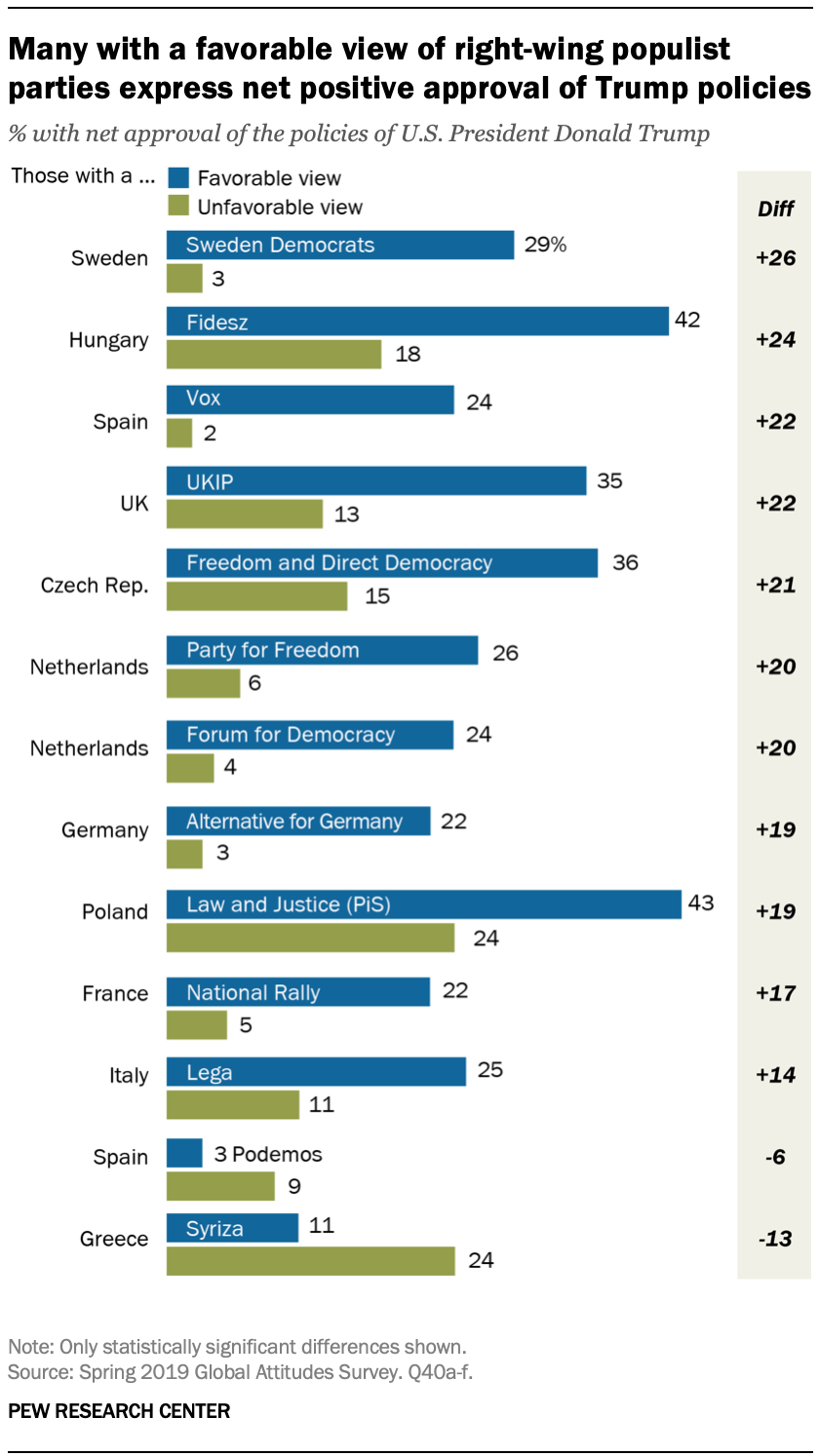 Those with favorable views of right-wing populist parties in Europe generally are more likely to express net approval of Trump’s six signature foreign policies. In Sweden and Hungary, for example, those who support Sweden Democrats and Fidesz are at least 24 percentage points more likely than those who do not to express net approval of Trump’s policies. Large gaps also exist in Spain, the UK, the Czech Republic and the Netherlands.

In 15 surveyed countries, people on the ideological right also are more likely to see Trump’s policies favorably, as measured by the approval index. This is especially the case in Israel, Australia, Greece, the UK, Canada and Hungary. Those on the ideological right also are considerably more likely to express net approval of Trump’s policies in Italy, Sweden, France, the Netherlands, South Korea and Bulgaria.

Confidence in Trump connected to net approval of his policies

In countries where people have less confidence in Trump to do what is right in world affairs, fewer people generally approve of policies. In Mexico, Germany, Turkey and Tunisia, for example, confidence in Trump is very low, as is the share of people who express net approval of his chief foreign policies. 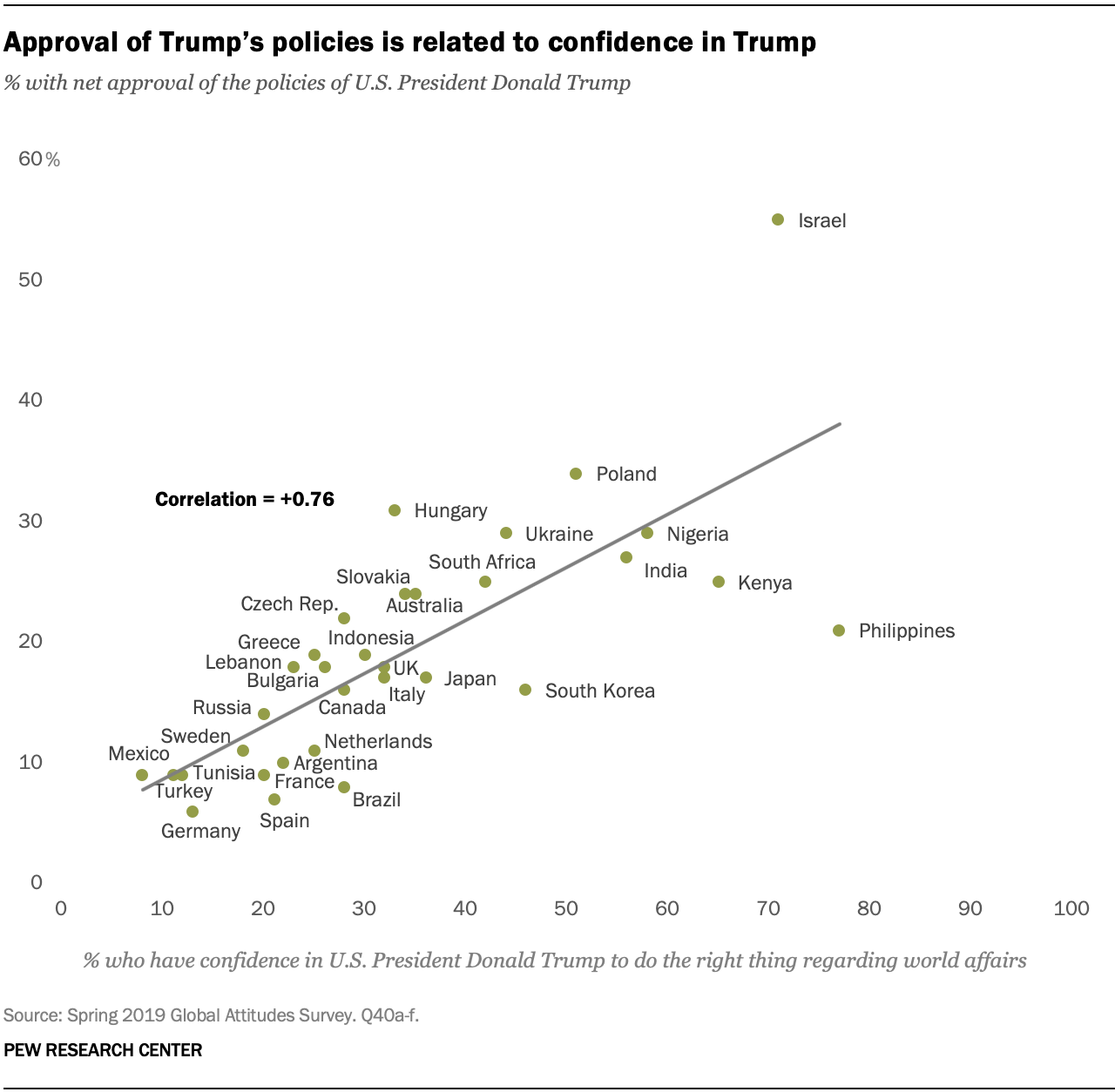 Despite this relationship, the two countries where people are most likely to voice confidence in Trump – Israel and the Philippines – have very different views of his policies. While a majority of Israelis approve of more policies than they disapprove of, only 21% of Filipinos are net approvers.

How people around the world see the U.S. and Donald Trump in 10 charts
Border wall is Trump’s least popular policy internationally
Asian countries on Trump’s trip have largely positive views of U.S. but disagree on policy
State of the Union 2018: Americans’ views on key issues facing the nation
State of the Union 2019: How Americans see major national issues