It’s early in the 2020 election year, but at least three dozen members of the House of Representatives already have opted out of running for new terms. That’s not far off the average number of retirements, resignations and other voluntary departures for a full election cycle, according to a Pew Research Center analysis. 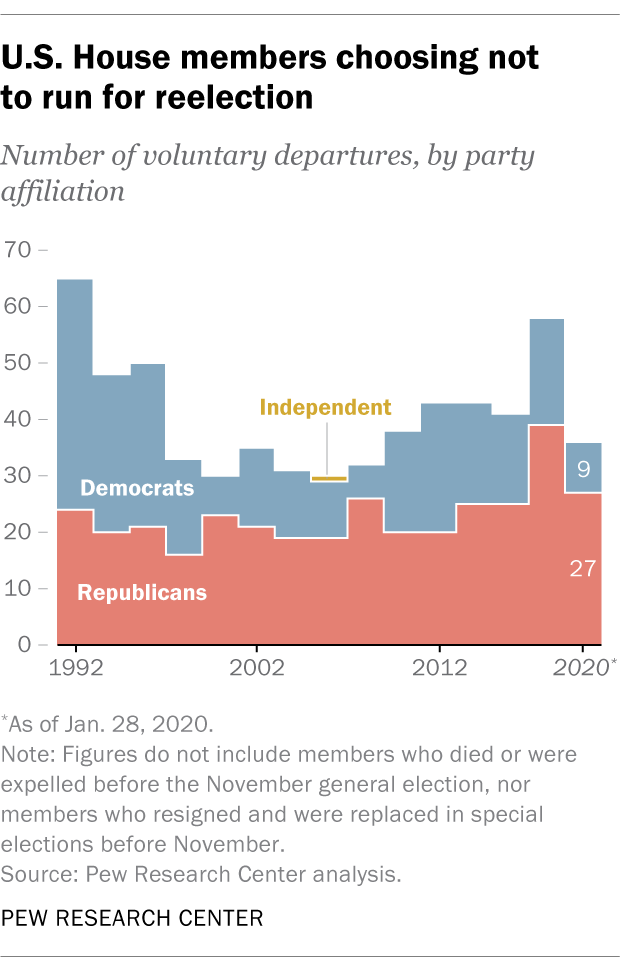 As of Jan. 28, 28 representatives (22 Republicans and six Democrats) have announced that they’re retiring and won’t seek reelection this year; four other Republicans and three Democrats are running for other offices instead. In addition, the seat of Duncan D. Hunter, R-Calif., who resigned earlier this month, won’t be filled by special election before November’s general election. That makes for 36 open seats that we know about so far. That figure could well rise: Doug Collins, R-Ga., reportedly will announce a Senate run soon, and as of Jan. 28, filing deadlines have passed in only 11 states (the deadlines for two states are as late as mid-July). By our count, nearly 80 representatives have yet to indicate their reelection plans.

Over the 14 election cycles between 1992 and 2018, an average of 41.2 House members each cycle chose not to run for reelection. During those cycles, the numbers ranged from a low of 30 (in both 2000 and 2006) to a high of 65 in 1992. The 1992 election cycle holds the record for voluntary House departures going back to 1930, based on our analysis and a tally compiled by Vital Statistics on Congress.

According to our analysis, the 2018 election cycle saw the second-highest number of voluntary departures from the House (that is, members retiring, resigning or pursuing some other office) since the early 1990s, with 58 representatives (39 Republicans and 19 Democrats) not running for reelection. Of those 58, 31 retired outright, 21 left to run for some other office, and six resigned without being replaced in a special election. (This time around, four other House seats besides Hunter’s are currently vacant due to resignation or death, but they are scheduled to be filled by special elections. Since the winners of those four special elections presumably will seek full terms this November as incumbents, we didn’t include them in our count.)

As in similar analyses we’ve done in the past, we began by combining several published lists of departing House and Senate members (such as those from The Atlantic and the House Press Gallery) and verified the names and statuses through media reports. We also drew on data we gathered in 2014 and 2018. We categorized retirements, resignations and choices to run for some other office as voluntary departures. 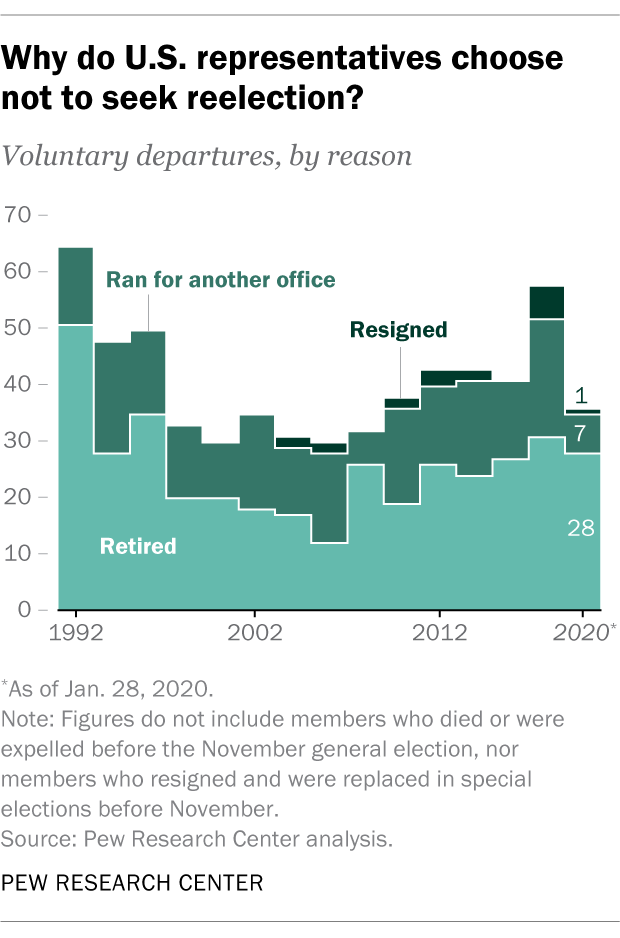 The 28 retirements so far this cycle already are more than the average of the 14 previous cycles, which was 25.3. The retirees this time around include several long-serving representatives, including James Sensenbrenner, R-Wis., who will have served 42 years by the end of his current term; Pete Visclosky, D-Ind. (36 years); and Nita Lowey and Jose Serrano, both D-N.Y. (32 and 31 years, respectively).

At the other end of the seniority spectrum, Paul Mitchell, R-Mich., and Francis Rooney, R-Fla., both are calling it quits after just two terms: Mitchell cited frustration with “the rhetoric and vitriol [that] overwhelms policy,” while Rooney said he was “tired of the intense partisanship that stops us from solving the big questions that America needs solved.”

Over on the Senate side, four of the 33 senators whose terms are up this year have chosen to retire at the end of their terms rather than run for reelection, not an unusual number by the standard of recent years. Three of the retiring senators are Republicans – Pat Roberts of Kansas, Lamar Alexander of Tennessee and Mike Enzi of Wyoming – and one is a Democrat, Tom Udall of New Mexico. (Johnny Isakson, R-Ga., resigned at the end of 2019; his replacement, Kelly Loeffler, is running in a special election for the two years left on his term. Martha McSally, R-Ariz., also is running in a special election this year; she was appointed to replace Jon Kyl, who himself was named to temporarily fill the seat left vacant by John McCain’s death in August 2018.)