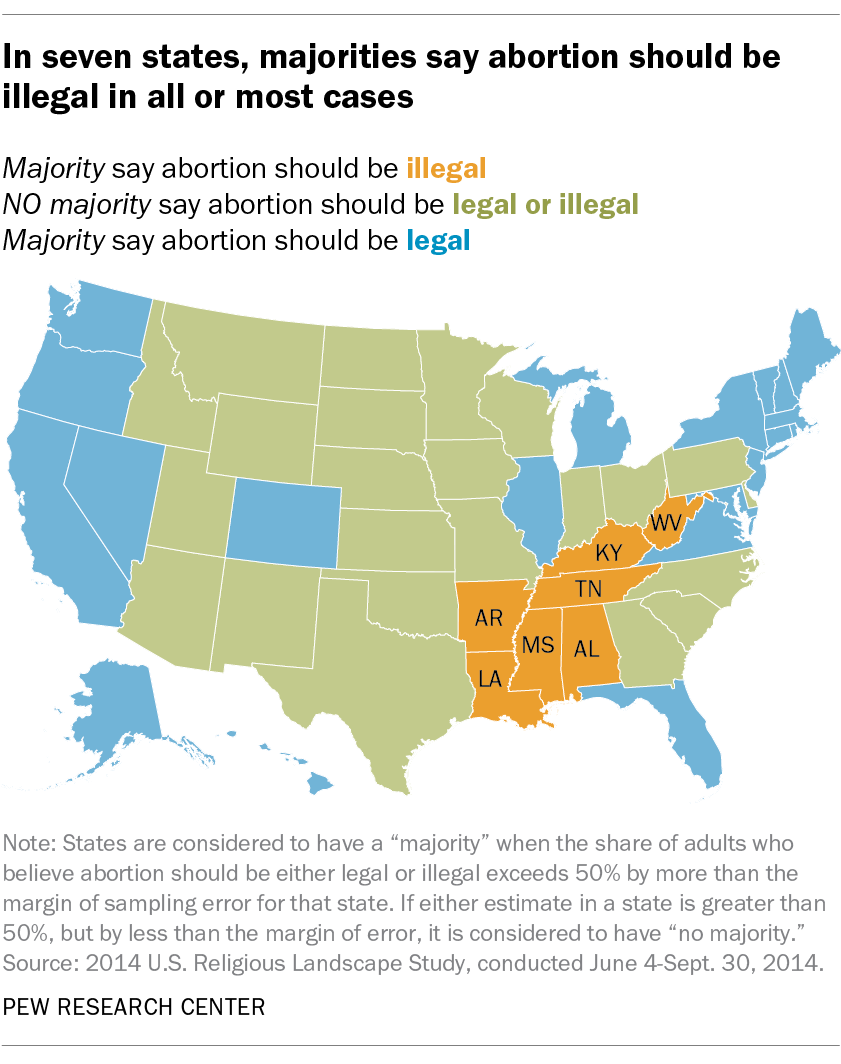 In 2019, lawmakers in seven states enacted laws that could, if they withstand legal challenges, ban the vast majority of abortions in those states. A new analysis by Pew Research Center shows that in these seven states, as well as others that have enacted various other restrictions on abortion, public opinion tends to run much more against legal abortion than in states that have not passed these laws.

A review of public opinion data shows that majorities of adults in four of the seven states that enacted stringent new laws in 2019 – Mississippi (59%), Alabama (58%), Kentucky (57%) and Louisiana (57%) – say abortion should be illegal in all or most cases. Opposition to abortion falls short of a majority opinion in the other three states – Missouri (50%), Georgia (49%) and Ohio (47%) – but anti-abortion sentiment in these states is still higher than the national average (39%).

A majority of Americans (61%) believe that abortion should be legal in all or most cases, and consistent with those views, a Pew Research Center survey conducted in summer 2019 found that 59% of the public say their greater concern is that some states are making it too difficult to get an abortion, while 39% are more concerned that some states make it too easy.

Forty-seven years ago this month, the U.S. Supreme Court ruled in Roe v. Wade for a constitutional right to abortion at least in the first trimester of pregnancy, though subsequent decisions by the high court have allowed states to impose restrictions such as a 24-hour waiting period. The laws enacted in 2019 have been challenged in court and could give the Supreme Court an opportunity to revisit Roe.

This analysis examines the degree to which abortion laws in each U.S. state reflect broader public opinion on abortion in that state.

The state-level public opinion data comes from our latest Religious Landscape Study (RLS), a nationally representative telephone survey conducted in the summer of 2014 among 35,000 respondents, including a minimum of 300 respondents from every state and the District of Columbia. The survey is estimated to cover 97% of the non-institutionalized U.S. adult population.

The question we used for this analysis asked people if they believe abortion should be “legal in all cases,” “legal in most cases,” “illegal in most cases” or “illegal in all cases.” We were comfortable using survey data from 2014 because public opinion on abortion in the United States has been relatively stable in recent decades. Additional information about the RLS survey methodology can be found here. Full details on question wording can be found in the topline questionnaire (which also includes other questions asked in the survey.)

For the data on laws, we reviewed statutory language available on states’ legislative websites. Laws were included if they have been enacted by state lawmakers. Therefore, even laws that are not being enforced due to court challenges are included in our analysis.

Our state-by-state public opinion data comes from the 2014 Religious Landscape Study (RLS), which asked 35,000 U.S. adults across all 50 states how they generally feel about abortion laws – whether abortion should be “legal in all cases,” “legal in most cases,” “illegal in most cases” or “illegal in all cases.” Given that public opinion on abortion has been relatively stable in recent decades, and that the RLS sample size was large enough to allow state-by-state analysis, we have used data from that 2014 survey to compare views on abortion in each state with parts of that state’s legislative record on abortion.

Specifically, we reviewed whether each state has enacted one or more of five different laws:

Many of these state laws have been challenged in the courts, and a good number are not being enforced due to court rulings. But all of these laws that were passed by state legislatures and signed into law by governors were included in this analysis, which aims to measure the degree to which legislation reflects public opinion at the state level. State codes also include numerous other laws concerning abortion, such as limitations or bans on the procedure after fetal viability or closer to the end of a pregnancy. However, since the vast majority of abortions (roughly nine-in-ten) in the U.S. occur during the first trimester, and the wording of our survey question asks people about abortion in “all” or “most” cases, this analysis focuses on selected regulations that can affect people seeking an abortion at any stage of a pregnancy. 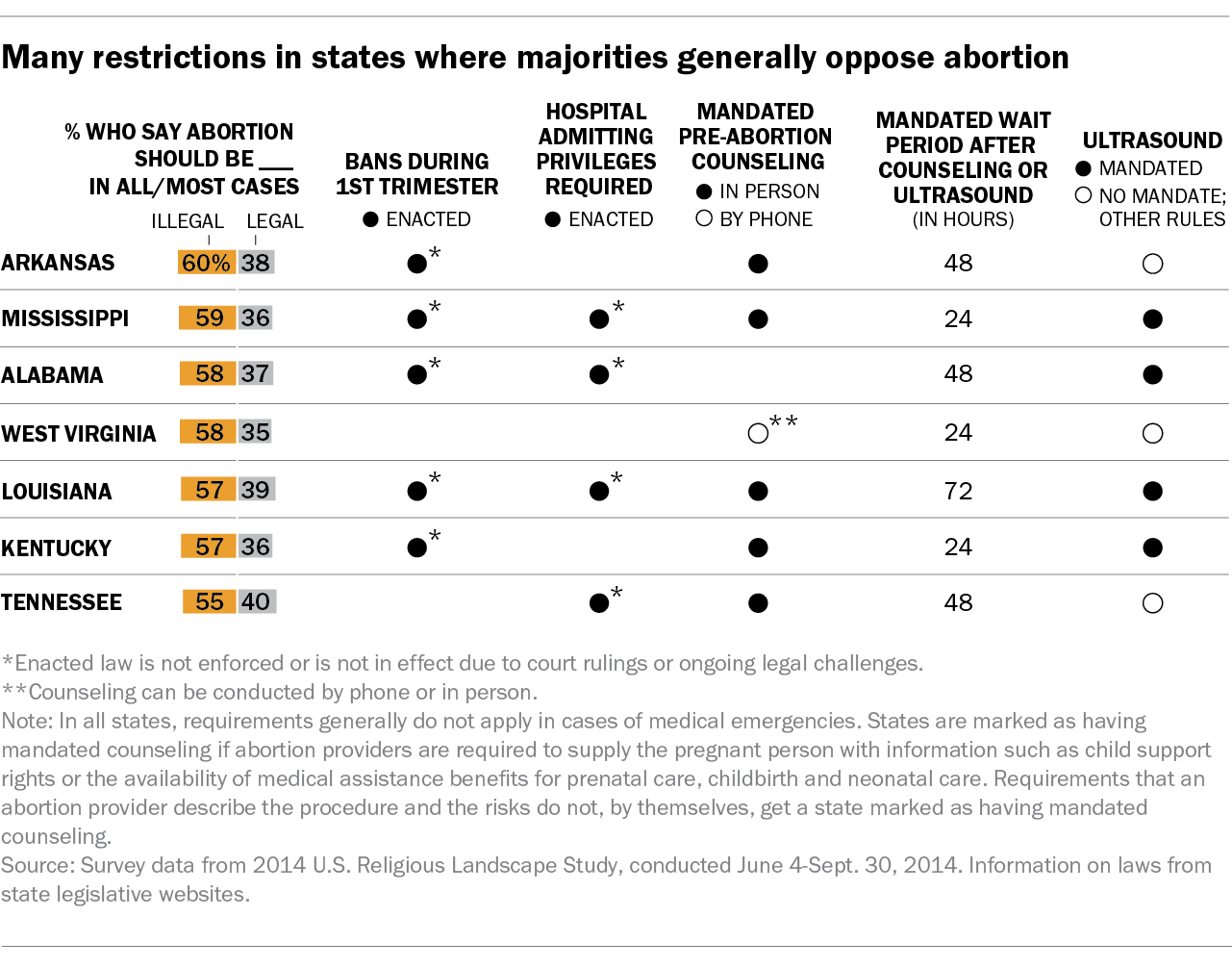 There are seven states where majorities say abortion should generally be illegal. Our analysis shows that four of them – Alabama, Kentucky, Louisiana and Mississippi – have passed laws with all or all but one of these requirements: an in-person or telephone counseling session, a waiting period, a mandated ultrasound, admitting privileges, and a ban on abortion extending to all or parts of the first trimester. Another of the states, Tennessee, has enacted all of these requirements other than the mandate for an ultrasound and a ban on abortions that extends to the first trimester. And Arkansas has enacted all of these laws other than the mandates for an ultrasound and hospital-admittance privileges.

In the 20 states where majorities say abortion should be legal in all or most cases, these five types of laws are far less common. Indeed, 16 of the 20 states have not passed any of them. (Some of these states, including New York, have recently passed legislation to protect, rather than restrict, abortion rights.) In the other four states, lawmakers have passed at least one of the five types of restrictions. For example, Virginia mandates an ultrasound, has a 24-hour waiting period and requires counseling either in-person or by telephone, while Florida mandates an ultrasound.

The pattern is less clear in the 23 states where there is no majority view on abortion one way or the other. Most of these states (20) have passed laws requiring a waiting period for an abortion. Fewer require in-person or telephone counseling (12). Eleven have enacted laws mandating ultrasounds prior to an abortion, while six require hospital-admitting privileges for abortion providers. And six out of these 23 (Georgia, Iowa, Ohio, Missouri, North Dakota and South Dakota) have passed “heartbeat bills” or similar bans on abortion that extend to all or parts of the first trimester.

Six of these 23 states – Georgia, Missouri, North Dakota, Oklahoma, Texas and Wisconsin – have all of these types of abortion restrictions or all but one, while only two states in this category (New Mexico and Delaware) have enacted none of the five types of laws.

It’s worth noting that, for people who oppose (or support) legal abortion in “most,” rather than “all,” cases, our survey did not ask specifically about which cases the respondent had in mind; the question is designed to measure attitudes toward abortion broadly (and not toward any specific law). That said, none of the state laws that have passed would ban abortion in all cases; for example, Alabama’s law, considered the most restrictive, would ban abortion in nearly all cases, with exceptions when the health of the pregnant person is at risk or when the fetus had a “lethal anomaly” that would cause it to die.

Public opinion on abortion, and abortion laws enacted in each state

*Enacted law is not enforced or is not in effect due to court rulings, ongoing legal challenges or referendums.
**In Virginia, if gestational age cannot be determined via transabdominal ultrasound, other ultrasound imaging must be offered but can be refused by the patient.
#Statutes in Ohio, Georgia and North Dakota do not explicitly require an ultrasound but do require testing for a fetal heartbeat or gestational age.
^In Texas, pregnant people living 100 miles away from the nearest licensed abortion provider can receive counseling by phone instead of in person.
Note: In all states, requirements generally do not apply in cases of medical emergencies.
States are marked as having mandated counseling if abortion providers are required to supply the pregnant person with information such as child support rights or the availability of medical assistance benefits for prenatal care, childbirth and neonatal care. Requirements that an abortion provider describe the procedure and the risks do not, by themselves, get a state marked as having mandated counseling.
Bolded percentages indicate that the state has a “majority” who believe abortion should be either legal or illegal. States are considered to have a “majority” when the share of adults who believe abortion should be either legal or illegal exceeds 50% by more than the margin of sampling error for that state. If either estimate in a state is greater than 50%, but by less than the margin of error, it is considered to have “no majority.”
Source: Survey data from 2014 U.S. Religious Landscape Study, conducted June 4-Sept. 30, 2014. Information on laws from state legislative websites.