Most Americans say they’re changing at least one everyday behavior to help protect the environment, according to a recent Pew Research Center survey. But are Americans doing enough to make a difference? The answer, as you might expect, varies by what environmentally friendly action you’re looking at.

Take food waste, for instance, most of which is landfilled or incinerated rather than composted. Eight-in-ten Americans say they reduce their food waste for environmental reasons, although only 52% think doing so makes a big difference for the environment, according to the October survey. In fact, substantially reducing food waste would make a big dent in the amount of waste the U.S. produces: More than 40 million tons of food waste was generated in 2017, according to the Environmental Protection Agency, comprising 15.2% of all municipal solid waste – essentially, ordinary trash.

Overall, though, Americans haven’t had much success in reducing their food waste, according to our analysis of EPA data. In 2000, Americans generated 0.6 of a pound of food waste on average each day; that figure has crept higher ever since, reaching 0.69 of a pound in 2017.

About two-thirds of Americans say in the Center’s recent report that using fewer single-use plastics (such as cups, straws and bags) would make a big difference for the environment, and 72% say they themselves are using fewer disposable plastics for environmental reasons.

But the EPA data suggests that, on a per-person basis, the amount of waste from disposable plastic consumer items has held steady over the past two decades. We looked at waste-generation figures for plastic plates and cups; bags and wraps; No. 1 and 2 plastic bottles and jars (such as soda bottles and milk jugs, respectively); and other plastic containers and packaging. While the total volume of those items entering the waste stream has increased over time – to 15.6 million tons in 2017 (the most recent year available), from 14.6 million in 2010 – it’s risen in proportion to population, meaning that the average amount of such waste each American generates a day held nearly constant, at around 4 ounces. (Communities around the country have moved in recent years to tax, ban or limit bags, straws and other single-use plastics.)

One area where Americans have unquestionably reduced their environmental footprint is water use. About two-thirds (68%) say in our survey that they’ve reduced the amount of water they use for environmental reasons – and according to the U.S. Geological Survey, by and large they have. 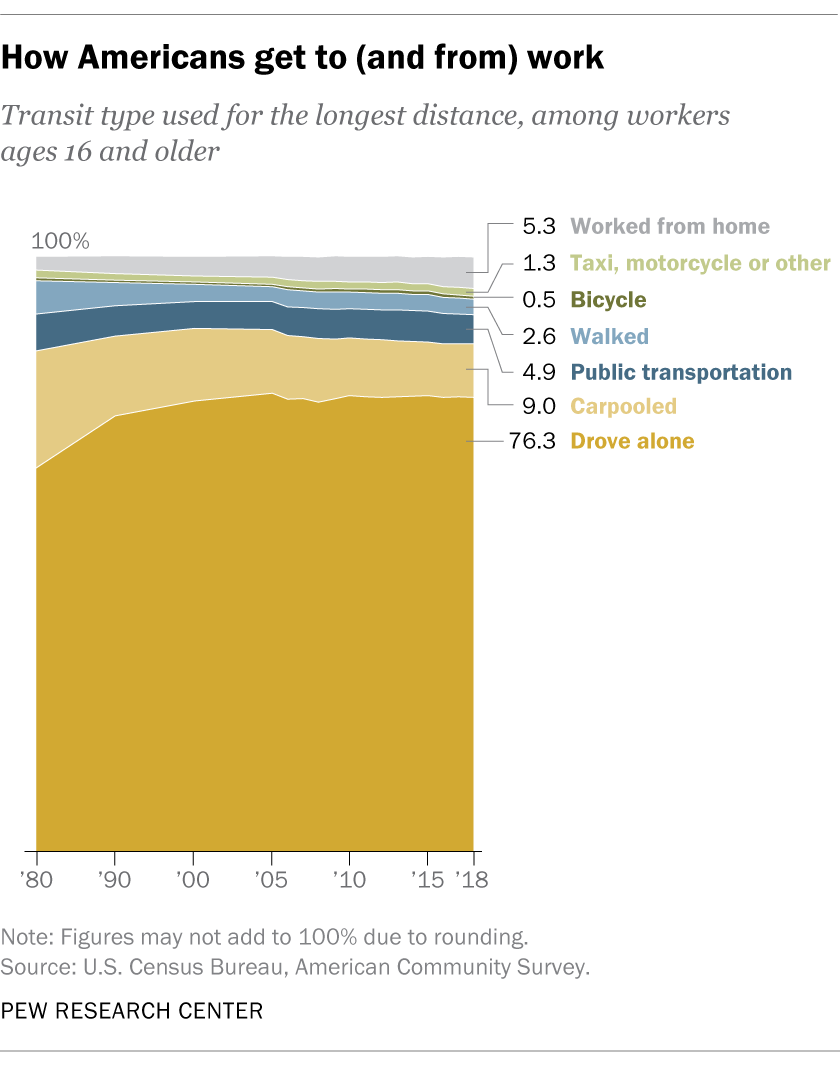 When it comes to how people get around, about half (51%) of Americans say they drive less or carpool to help the environment. But if that’s the case, it isn’t enough to show up in the data. Average vehicle-miles per licensed driver, according to our analysis of Federal Highway Administration data, stood at 14,255 in 2017 – down from the 2004 peak of 14,907, but up from 13,905 in 2011, in the wake of the Great Recession.

And carpooling, at least as a way to get to and from work, has fallen over the decades – from 20% of workers in 1980 to 9% last year, according to the Census Bureau. Around three-quarters (76%) of Americans typically drove alone last year, as they have every year since at least 2000.

About two-in-five Americans (41%) say they’re eating less meat for environmental reasons, according to the Center’s survey. While there are many reasons (health, environmental, ethical) why people might choose to limit their meat consumption, we do know Americans are doing so – at least for beef.

Since peaking in 1976, beef consumption (measured in terms of average daily calories per person) has fallen by 32%, according to U.S Department of Agriculture data. But chicken consumption has more than doubled over that same period, and turkey consumption is up 85%. Add in pork, fish and other meats, and total consumption of all animal flesh is about where it was four decades ago.