Household living arrangements – how many people share a dwelling and how these people are related – affect many aspects of daily life, from finances to what a typical dinner looks like. While household patterns are tied to many factors, including economic development, local laws and cultural norms, they also vary by religion, according to a new Pew Research Center analysis of more than 20 million households in 130 countries and territories.

Christians, Muslims, Hindus, Buddhists, Jews and the religiously unaffiliated around the world are distributed in different ways across household types and sizes. And there are noticeable variations among these groups within regions and even within single countries.

Here are seven key findings about the connections between living arrangements and religion, based on the new report: 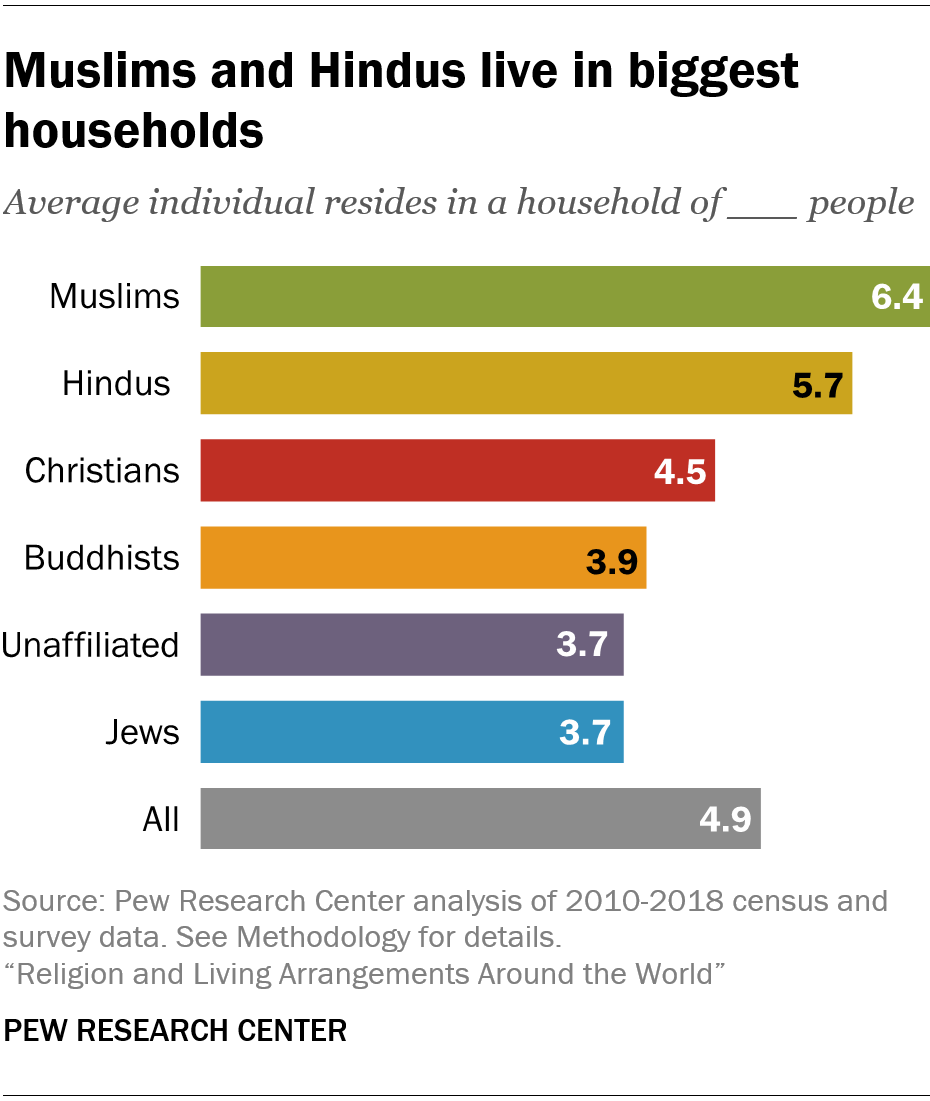 The average Muslim lives in a home of 6.4 people, followed by Hindus (5.7), Christians (4.5), Buddhists (3.9), the religiously unaffiliated – also known as “nones” (3.7) – and Jews (3.7). In the 15 countries in the study that have the world’s biggest households, Islam is the largest religion in all but one (Benin), and these nations are all in Africa, the Middle East and Asia. Christians and the religiously unaffiliated are the largest groups in the 15 countries with the smallest households, which are all in Europe, with the exception of South Korea. For all people, households are biggest in sub-Saharan Africa (6.9) and smallest in Europe (3.1).

2Extended-family households – where relatives such as aunts, parents and grandparents live together – are the most common living arrangement around the world. This arrangement accounts for 38% of all people, including a majority of Hindus (55%), more than four-in-ten Buddhists (44%), and more than a third of “nones” (37%) and Muslims (36%). Countries where more than half the population lives in extended-family households are mostly in the Asia-Pacific region and sub-Saharan Africa, but 58% of people in Kosovo and 53% in Haiti also live with extended family. 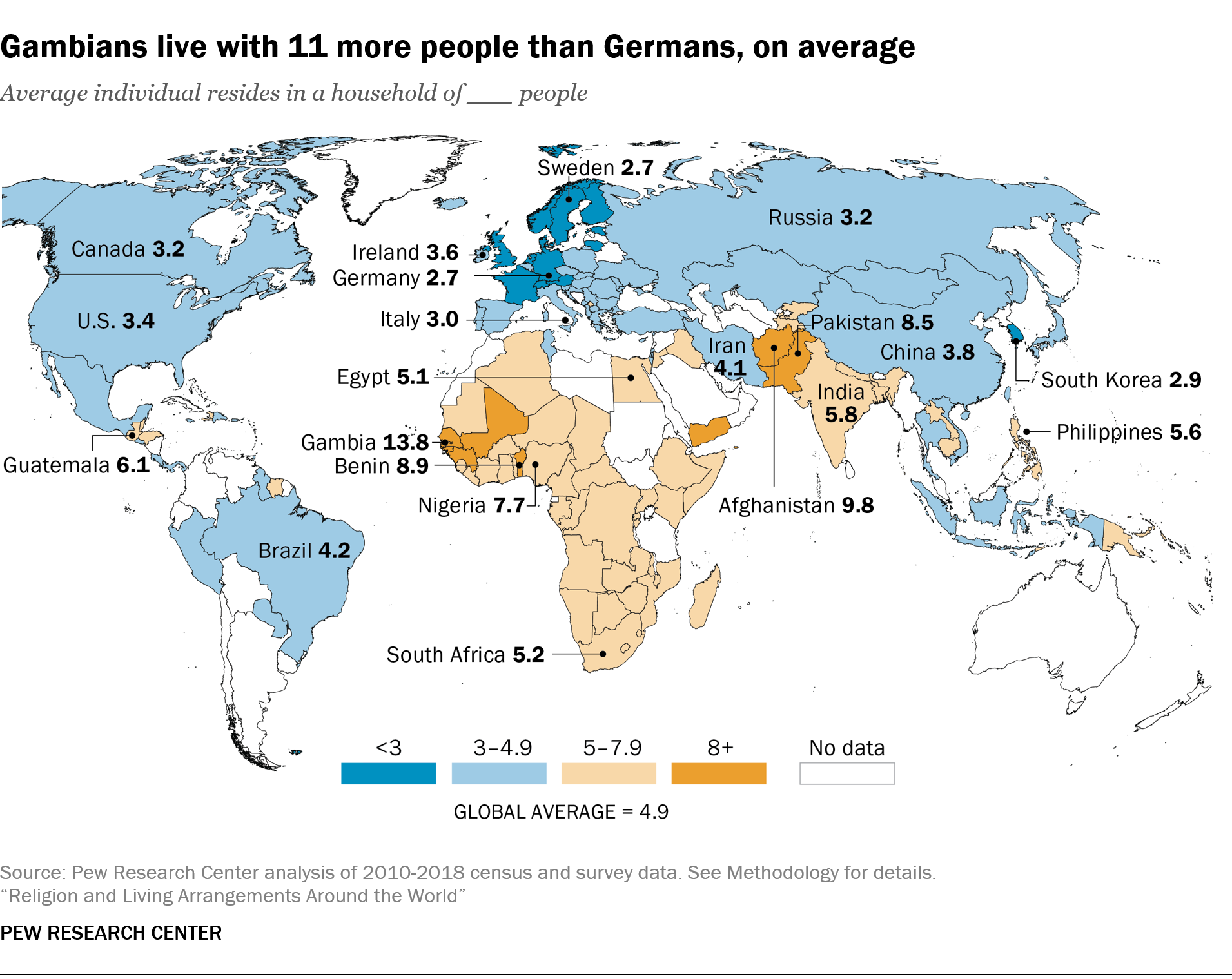 This type of household, in particular, is linked with lower levels of economic development: Earnings stretch further when shared within one household, and domestic chores are more easily accomplished if split among several adults living under one roof.

The second-most common type of household worldwide is the two-parent family, accounting for 33% of all people. In the United States, a third of all people live in two-parent homes (33%), and only one-in-ten live in extended-family households (11%).

3 Worldwide, Jews are the most likely to live alone (10%), while Muslims and Hindus are the least likely to do so (1% for each). These religious differences also surface within individual countries; in Canada, for example, Christians (12%) are four times more likely than Hindus (3%) to live alone. Overall, living alone is very rare in most parts of the world; only 4% of people live in solo households.

This type of arrangement is most common in Europe: At least one-in-five live alone in Finland, Germany, Sweden and Denmark, while comparatively large shares also do so in South Korea (21%) and Japan (15%). The range in shares of people who live alone is even more striking among older adults. Fewer than 1% of people ages 60 and older live alone in Afghanistan, compared with 41% in Lithuania. 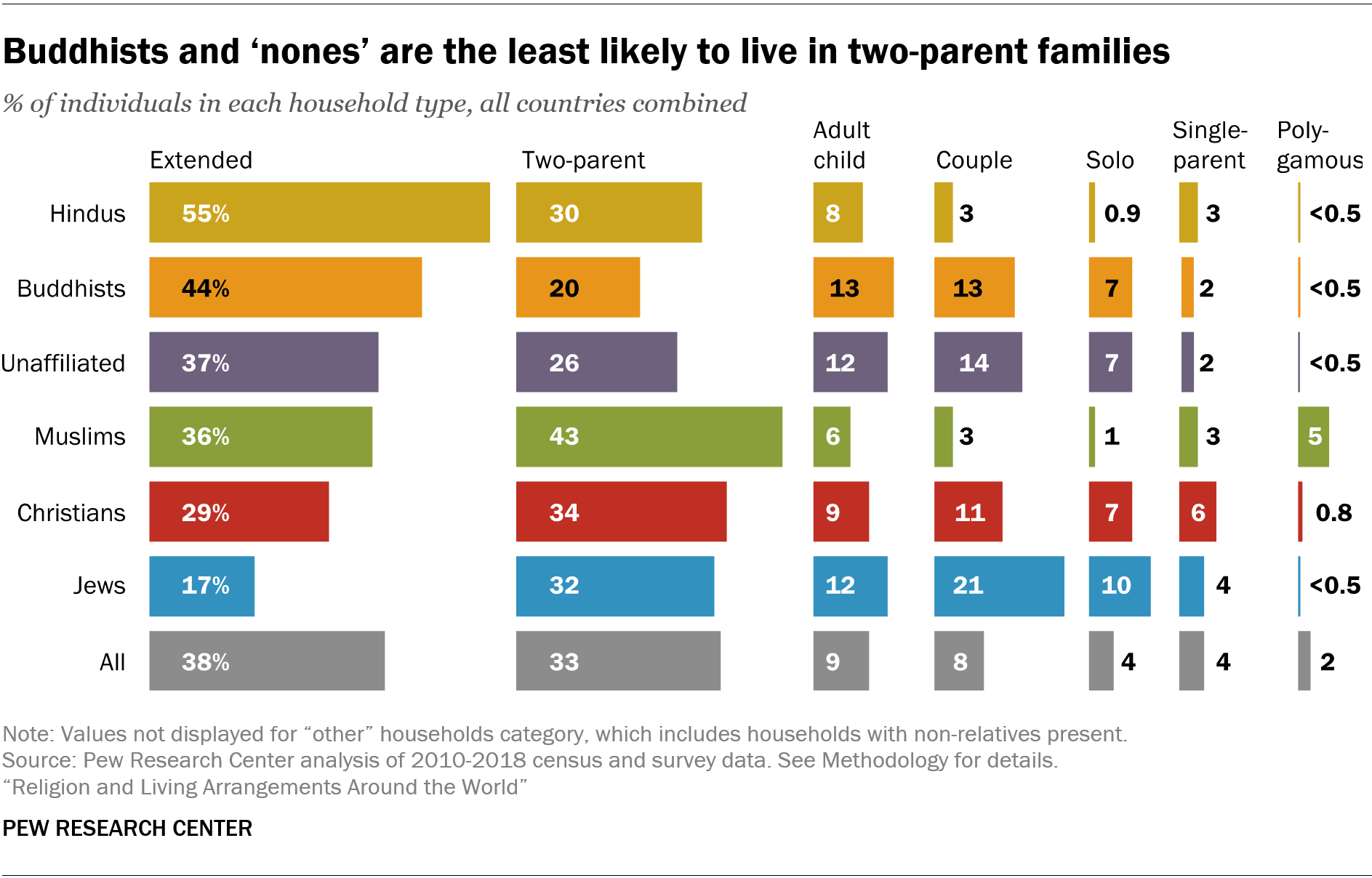 The U.S., the country with the world’s largest Christian population, also has the biggest share of children in single-parent homes: Almost a quarter of American children (23%) live with a sole parent and no other adult. The UK, Sao Tome and Principe, and St. Lucia – all Christian majority nations – have the next-highest shares of children in single-parent households at about 20% each. Muslim children around the world, meanwhile, are more likely to live in polygamous households (7%) than single-parent families (5%).

Generally speaking, most children around the world live in two-parent families (51%) or extended families (38%).

The high numbers in sub-Saharan African are driven largely by a dozen West and Central African countries where polygamy is either legal or permitted by religious tradition and more than 10% of the population lives in such homes. Although Muslims in this region are the most likely to live in polygamous households, adherents of folk religions are also often found in this arrangement. In Burkina Faso, for example, more than a third of all people (36%) live in polygamous households, including 45% of folk religion adherents, 40% of Muslims and 24% of Christians, making it the most common arrangement in that country.

Outside of sub-Saharan Africa, the country in this study that has the highest share of people in polygamous households is Afghanistan (5%). Data was not available from many of the Middle Eastern countries where polygamy is legal and presumed to be more common, such as Saudi Arabia.

6 Women, regardless of their religious affiliation, are more likely than men to be single parents. In Europe, 6% of women between the ages of 35 and 59 live in single-parent households, compared with 1% of men in the same age group; in the Latin America-Caribbean region there is a similar gap.

Women are also more likely to age alone, with about twice as many women ages 60 and older living in solo households than men of the same age (20% vs. 11%). That’s partly because women tend to live longer and marry men who are older. In each of the 130 countries in this analysis, men are older than their wives or female cohabiting partners by at least two years, on average. This age gap ranges from only about a year among North American Jews to almost 12 years among Muslims in sub-Saharan Africa.

7 Religion is inextricably tied to geography, laws, cultural norms and economic conditions, and it’s difficult to determine exactly how religion on its own affects living arrangements. Buddhists, Jews and the religiously affiliated, for example, live in relatively small households. But China, home to a majority of the world’s “nones” and about half of the world’s Buddhists, imposed a “one-child policy” from 1979 to 2016 that may have reinforced a tendency for these groups to have smaller families in China, and, as a result, pushed down average family sizes for Buddhists and “nones” worldwide.

Most of the world’s Jews, meanwhile, live in the U.S. and Israel, two economically advanced countries. In wealthier countries, people tend to live in smaller households – maybe because they delay childbearing to pursue higher education or because they can afford their own dwellings. This may help explain why Jews, on average, live in smaller households. Similarly, more than 90% of the world’s Hindus live in India, so any measure of how Hindus live globally or in the Asia-Pacific region largely reflects circumstances there.

Globally, women are younger than their male partners, more likely to age alone
Key findings on how world religions differ by education
Many religions heavily concentrated in one or two countries
Older people are more likely to live alone in the U.S. than elsewhere in the world
What is each country’s second-largest religious group?