Nearly three years into the Trump administration and less than two years until Angela Merkel has said she would step down as chancellor of Germany, Americans and Germans continue to have notably different perspectives on the relationship between their countries, according to the latest in a series of surveys conducted in both nations by Pew Research Center and Körber-Stiftung.

Americans are optimistic about the bilateral relationship and want to cooperate more with Germany in the future. They also see the U.S. military presence in Germany as very important to American national security. Germans, for their part, see the two countries’ relationship as strained and place less importance on the American troop presence for their own country’s national security.

Here are eight charts that summarize the findings of the surveys, conducted in September 2019: 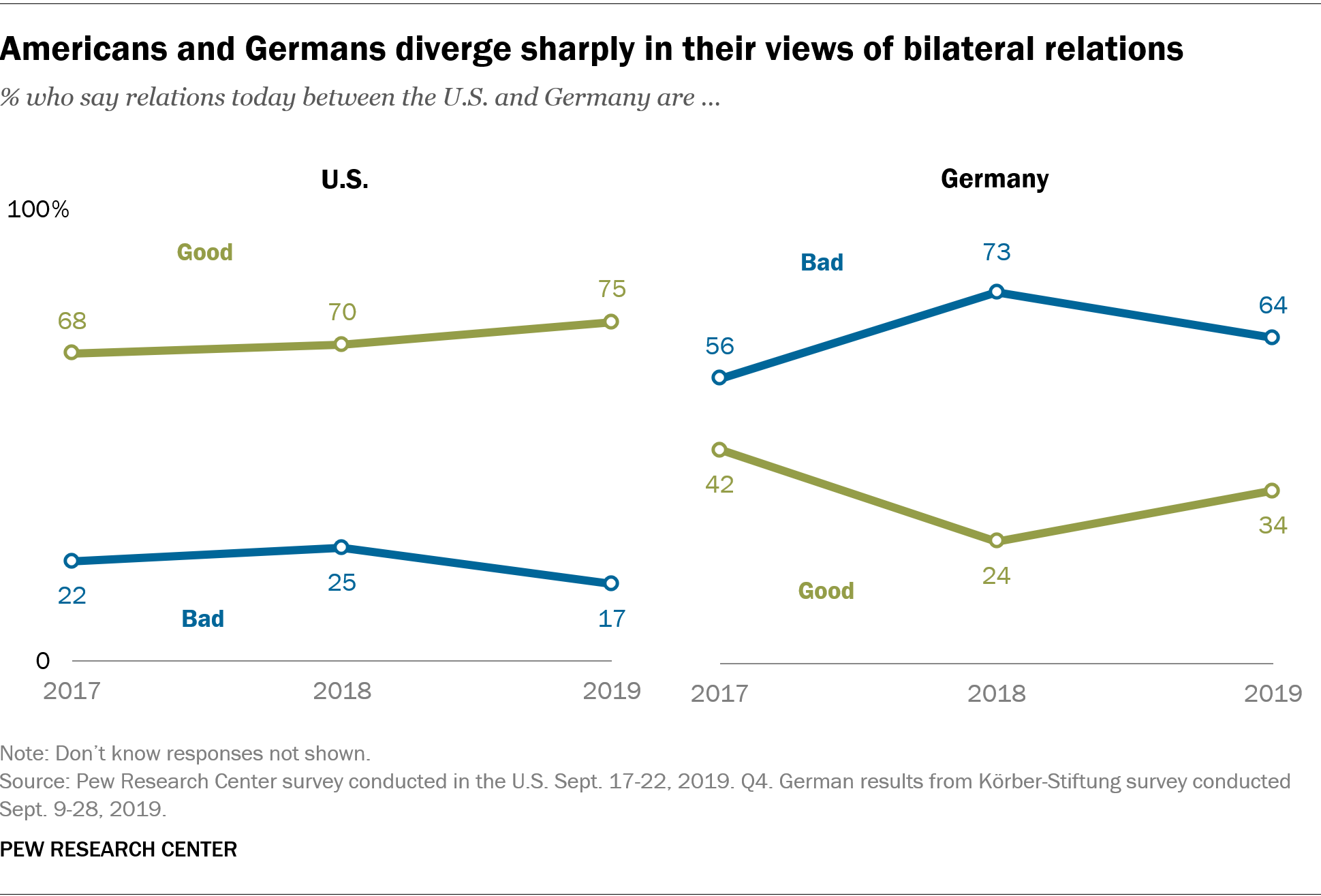 Americans’ evaluation of the bilateral relationship, on the other hand, is at its highest point in three years of surveys.

2 Americans and Germans differ over which country is most important to their own nation’s foreign policy. In the U.S., people are most likely to name the UK (36%) as the most or second-most important foreign policy partner for the U.S. Only about one-in-ten (13%) name Germany, ranking it fifth on Americans’ list. 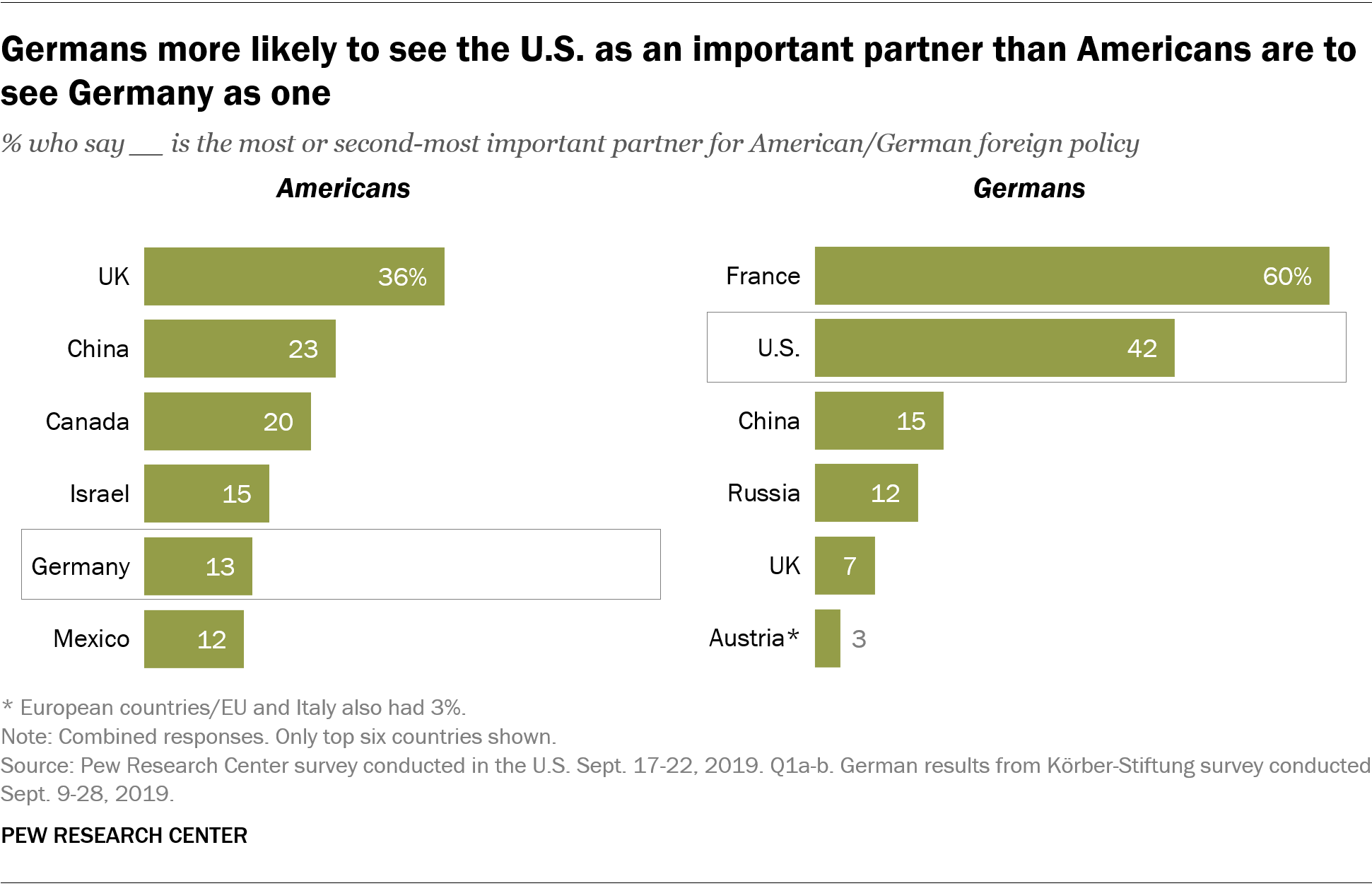 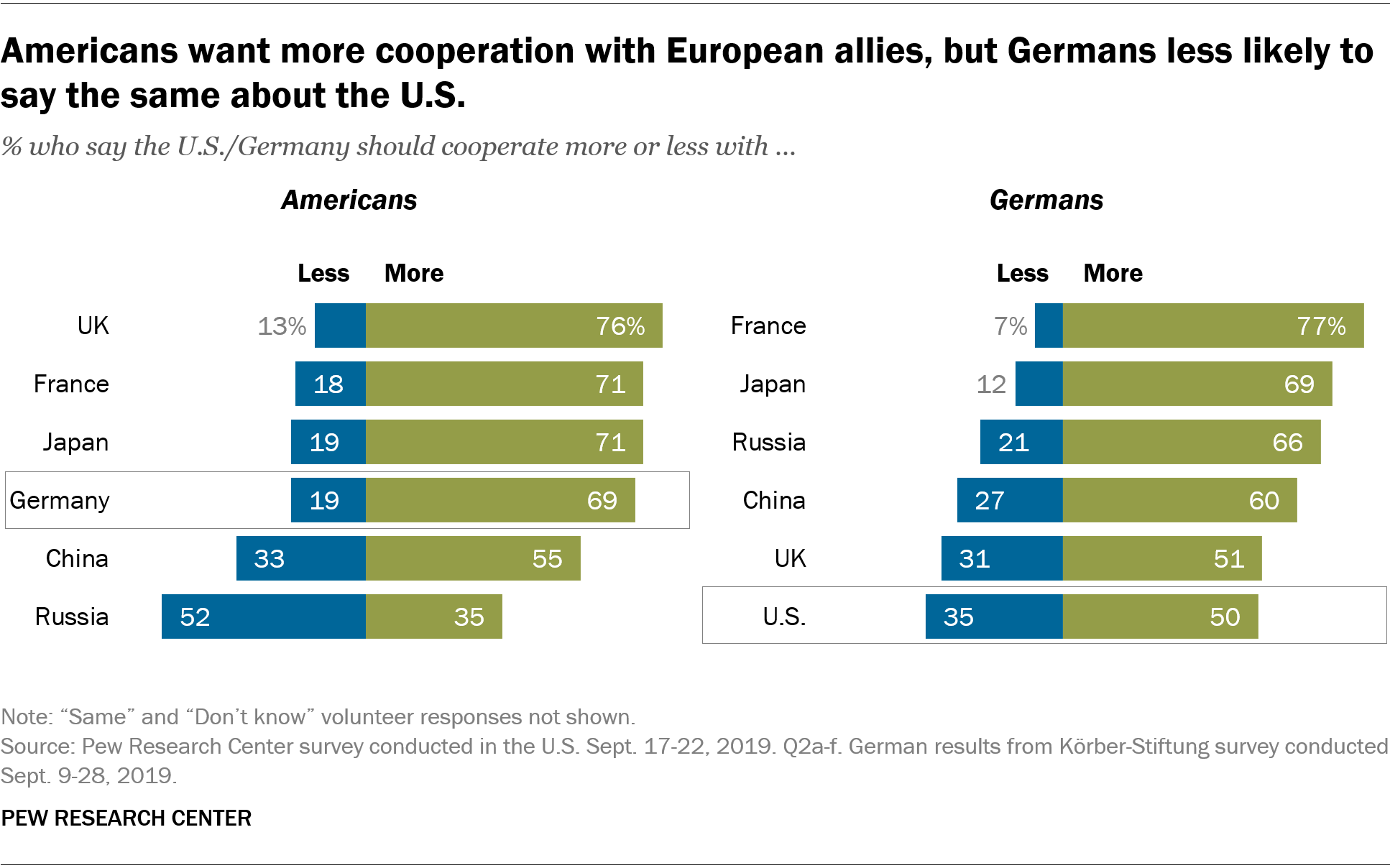 Germans are much more likely than Americans to say they want more cooperation with Russia (66% vs. 35%). And 52% of Americans want to cooperate less with Russia.

About three-quarters of Americans (76%) want more cooperation with the UK, while about half of Germans (51%) say the same. 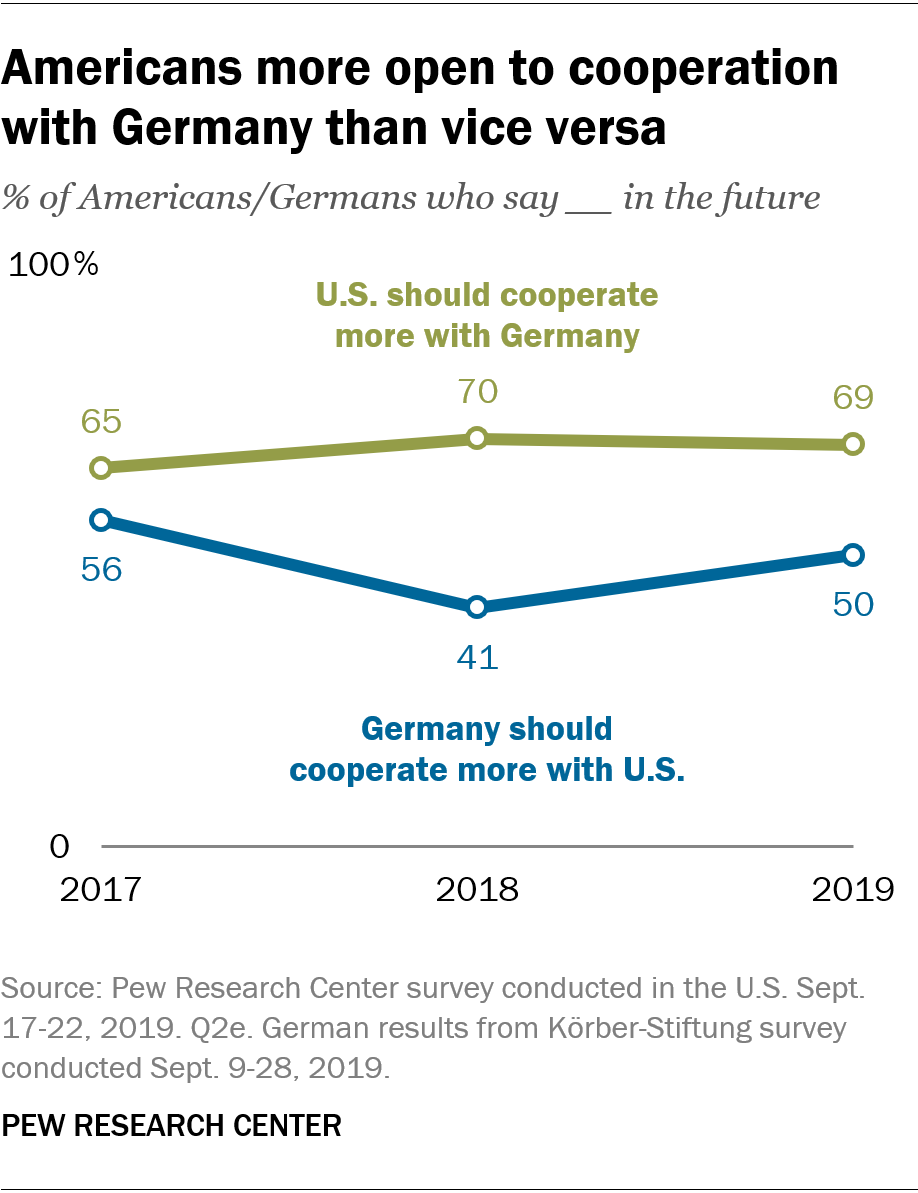 4 Americans have consistently been more eager to cooperate with Germany than the other way around. This year, people in the U.S. are 19 percentage points more likely to say their country should cooperate more with Germany than Germans are to say the same about the U.S. Nonetheless, the share of Germans who want more cooperation with the U.S. has increased by 9 points this year, bringing it closer to 2017 levels.

5 Americans want their country to have a closer relationship with Germany than with Russia, while many Germans see value in having close relations with both the U.S. and Russia.

Around six-in-ten Americans (61%) say it is more important for the U.S. to have a close relationship with Germany than with Russia, while 26% say the opposite. About one-in-ten (8%) volunteer that both relationships are important. 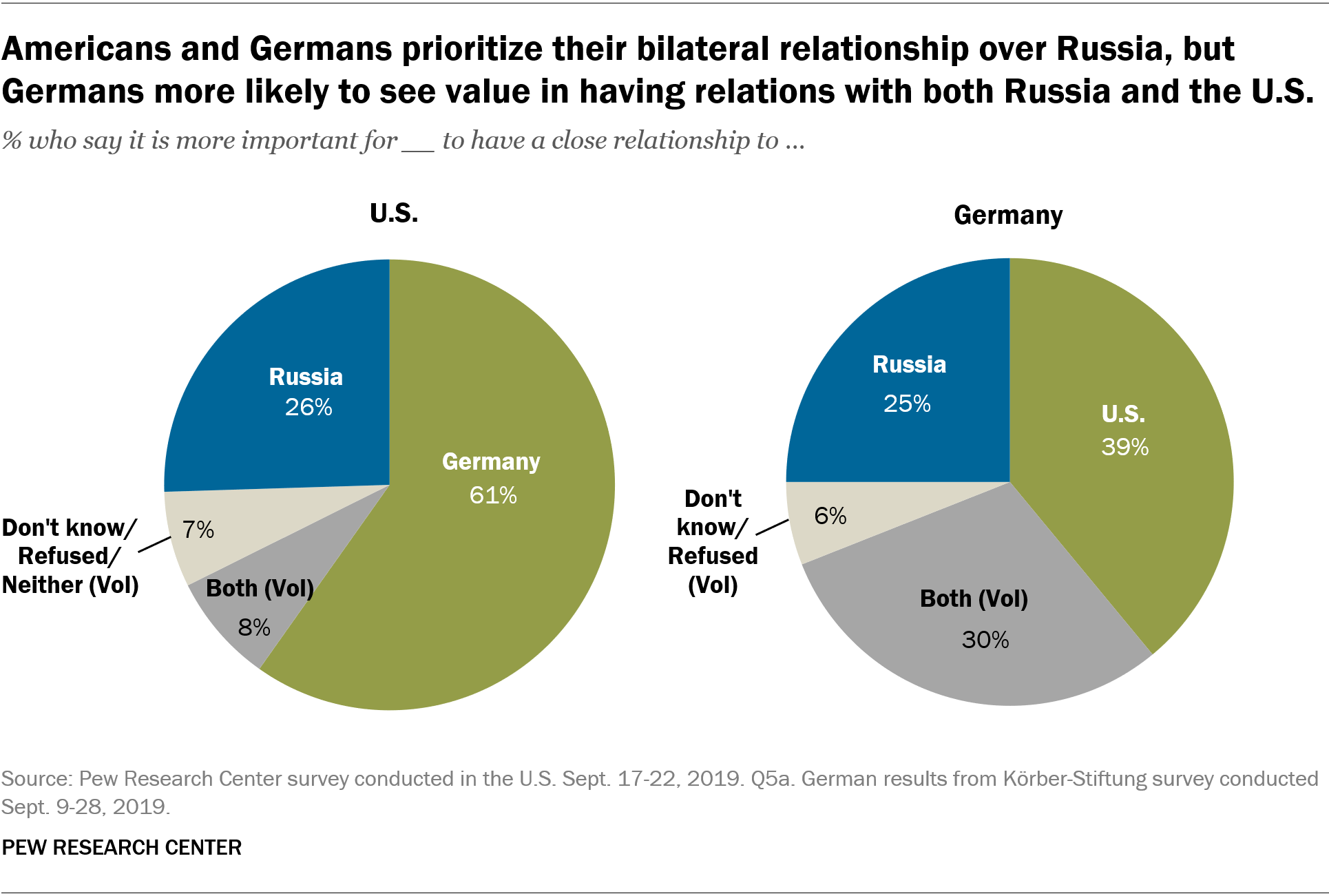 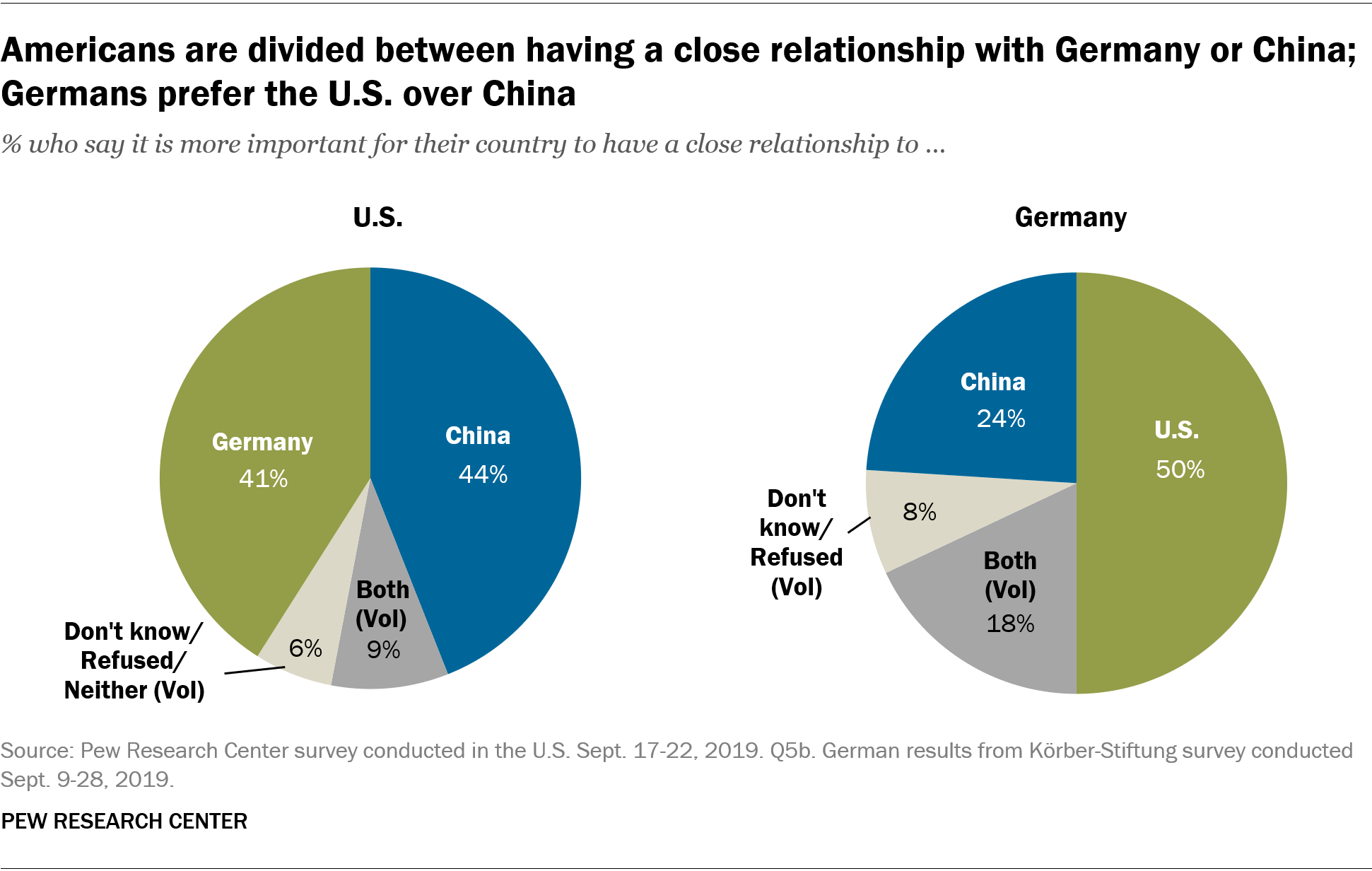 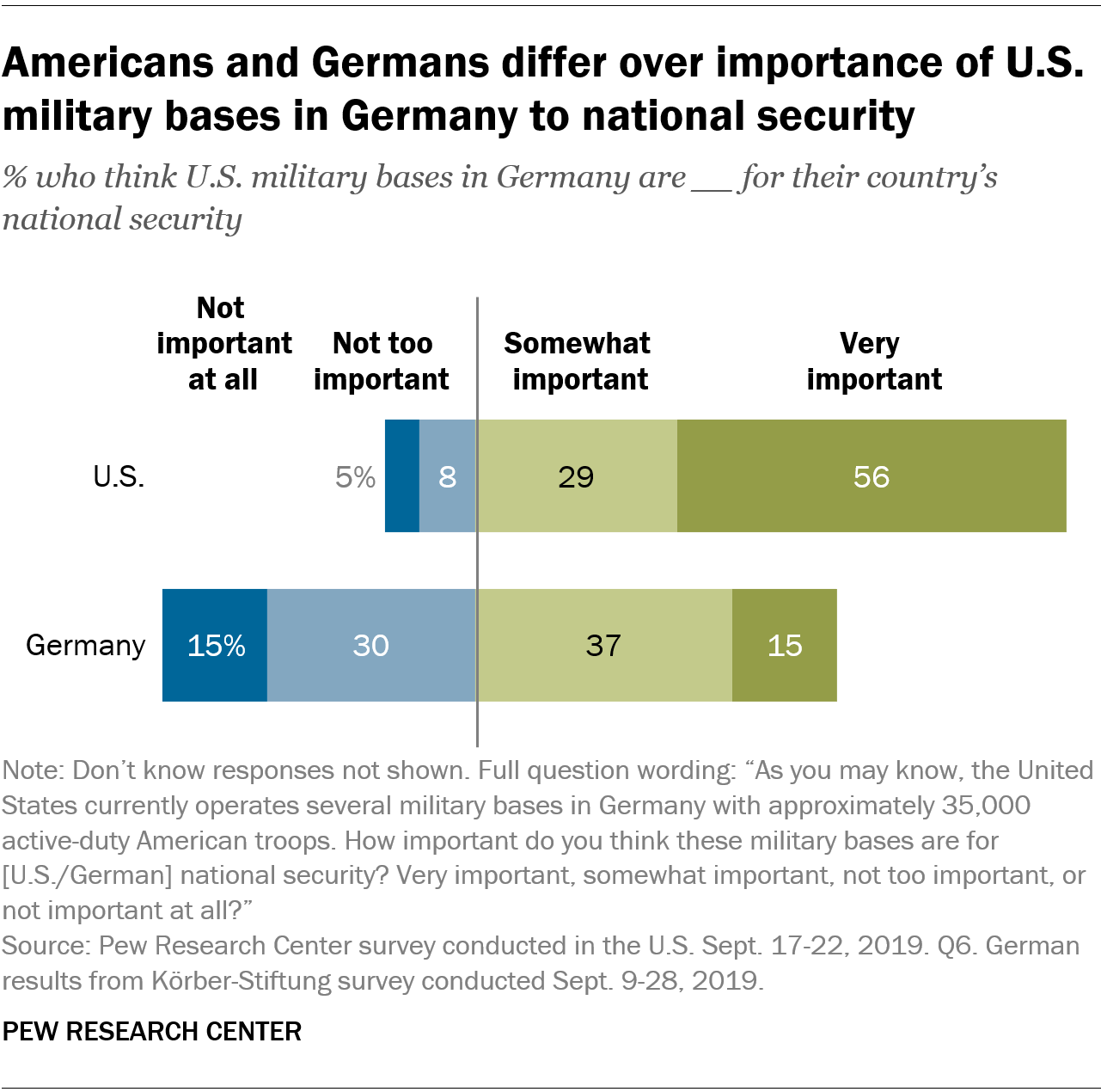 Among Germans, 52% say these American troops are vital for German national security, although only 15% claim they are very important. And 45% of Germans say the bases are not important, including 15% who say they are not at all important. 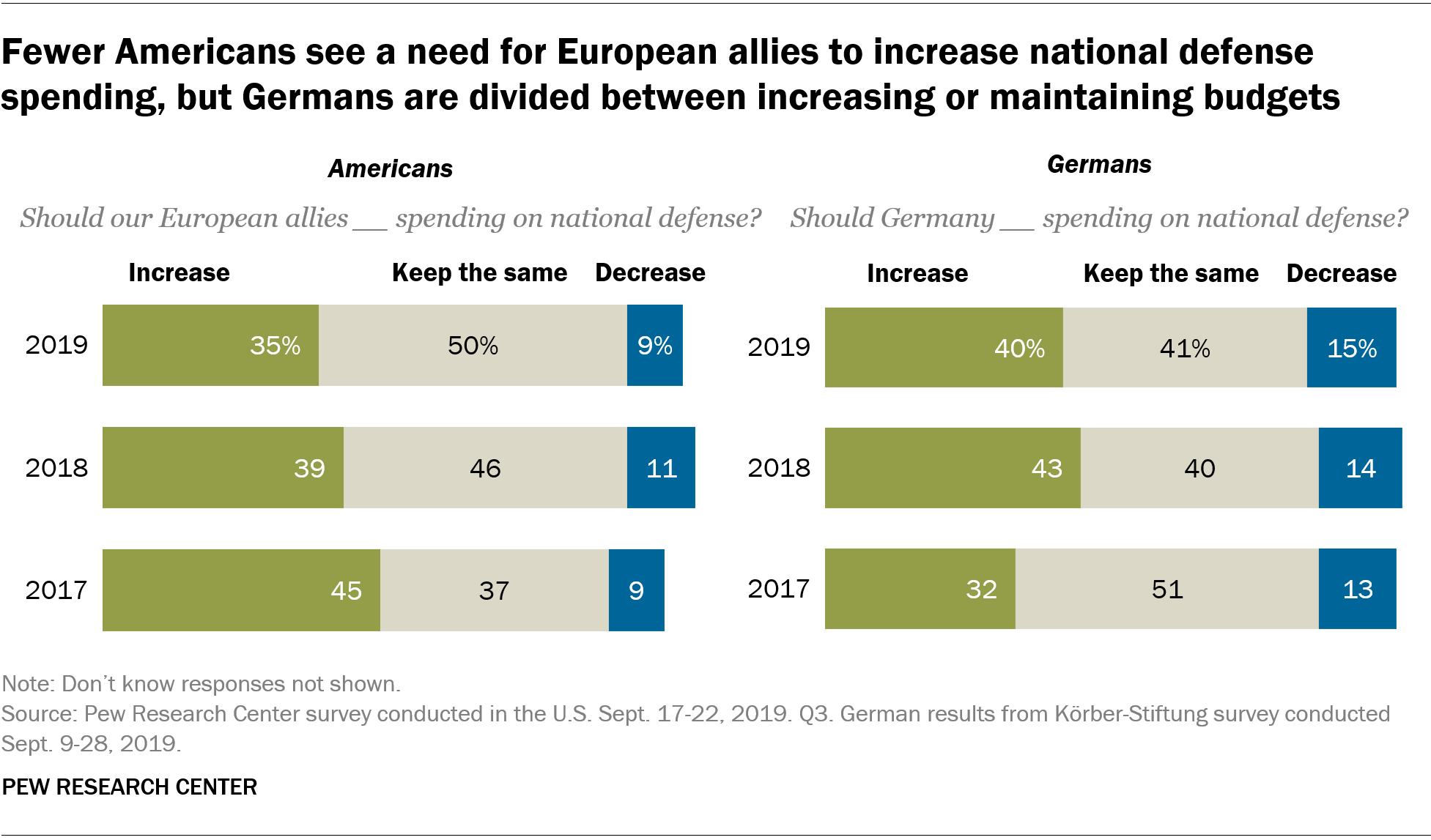 Germans are more divided. Around four-in-ten favor increasing their own defense budget (40%) or keeping it the same (41%), while 15% support a decrease.