Europe’s political environment has been rocked in recent years by the emergence of populist parties, many of which sit on the far right of the political spectrum and question the fundamental value of European integration. These parties generally receive relatively low favorability marks in national surveys, but their supporters stand out on a range of important issues. Below is a look at how supporters of Europe’s populist parties compare with nonsupporters on key issues, based on Pew Research Center’s 2019 Global Attitudes Survey.

See also: Exploring the link between European political parties’ ideology and their popularity on Twitter

Views of the European Union 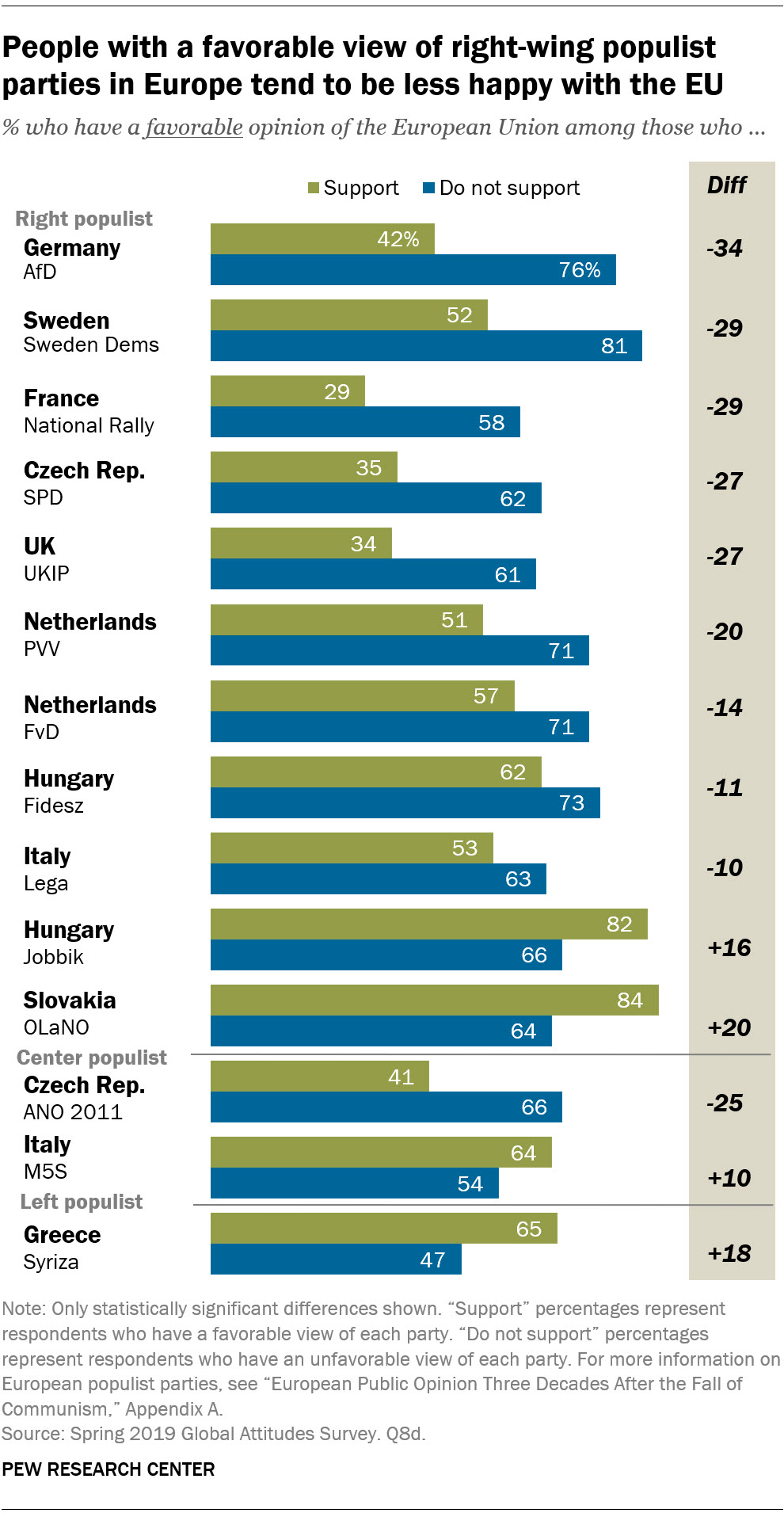 People with positive views of populist parties in Europe tend to have a much less favorable attitude toward the European Union. The starkest difference appears in Germany, where those who support the right-wing Alternative for Germany (AfD) party are 34 percentage points less likely to express a favorable view of the EU than people who do not support AfD.

Differences of 20 percentage points or more also exist between supporters and nonsupporters of right-wing populist parties in Sweden, France, the Czech Republic, the United Kingdom and the Netherlands.

The Czech Republic’s populist ANO 2011 party does not fit into a right-wing categorization but follows a similar pattern: 41% of its supporters have a positive view of the EU, compared with 66% of Czechs who do not support the party.

For some European populist parties that have recently tempered their rhetoric and moved toward the center of the political spectrum, the opposite pattern emerges. Those who support Slovakia’s OLaNO party, Hungary’s Jobbik, or Italy’s Five Star Movement (M5S), for example, are more likely than nonsupporters to have a favorable opinion of the EU. Likewise, supporters of the left-wing Greek party Syriza hold more favorable views of the EU than those who do not support the party.

Many European populist parties, particularly those on the right, have been critical of migration into the EU from Muslim-majority countries. The Center’s survey shows that supporters of these parties often have more negative attitudes toward Muslims in their country.

In Sweden, those with a favorable view of the Sweden Democrats – a party that has opposed increased multiculturalism and especially immigration – are 42 percentage points more likely than nonsupporters to have an unfavorable opinion of Muslims. A similar gap exists between Germans who support AfD and those who do not (41 points).

Smaller but still substantial gaps exist between supporters and nonsupporters of several right-wing populist parties in the Czech Republic, the Netherlands, France, Italy, Spain, the UK and Hungary.

On the other hand, those who support more left-leaning populist parties in Spain (Podemos), Greece (Syriza) and France (Insoumise) are more favorable toward Muslims than those who do not. 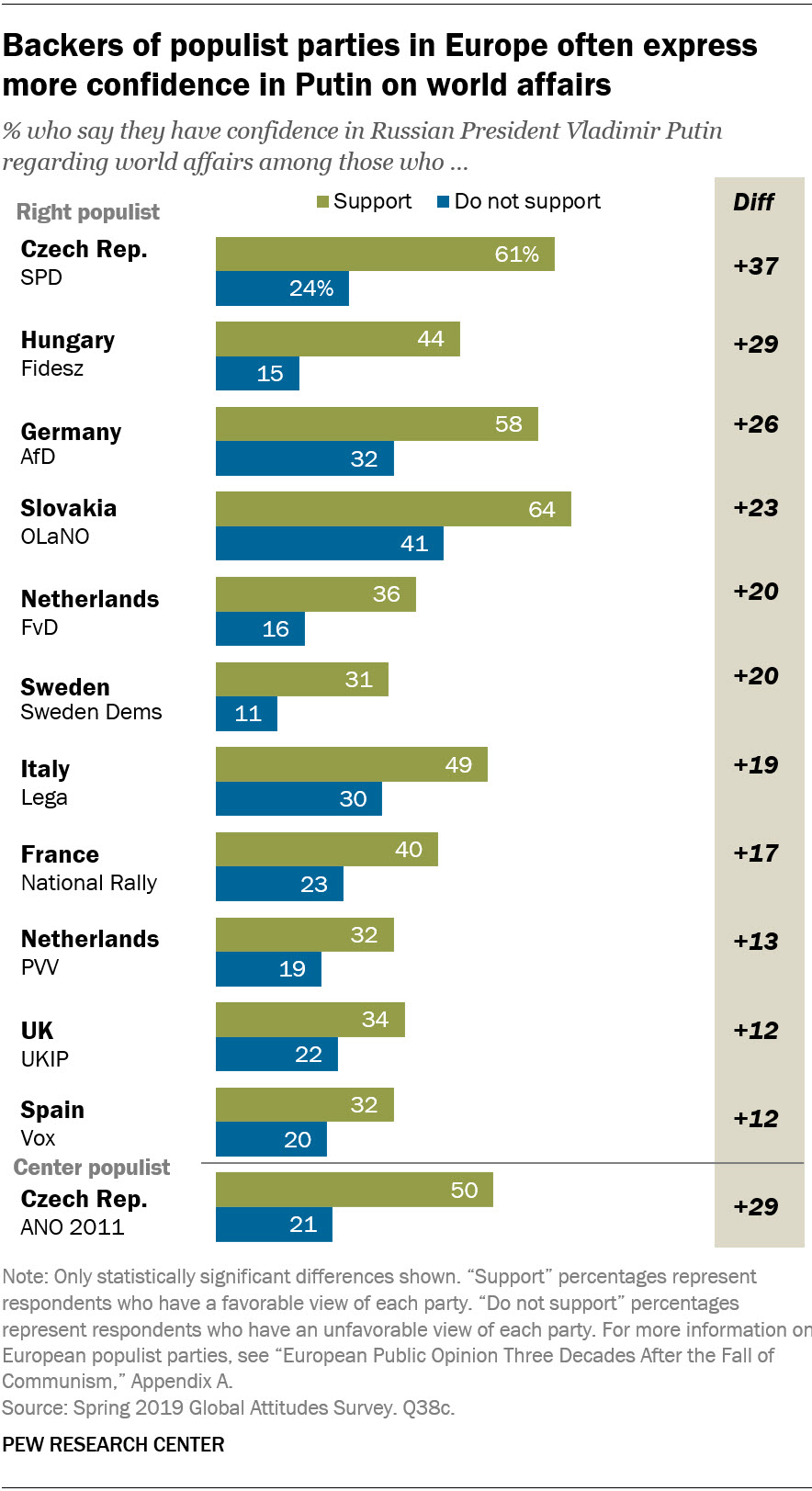 The biggest difference between populists and nonpopulists is in the Czech Republic. Around six-in-ten (61%) of those with a favorable view of the Czech Freedom and Direct Democracy party (SPD) have confidence in Putin on world affairs, compared with just 24% of those with an unfavorable view of the party. SPD leaders have been vocal about their opposition to Western sanctions on Russia after the annexation of Crimea and have aligned themselves with the Czech Republic’s pro-Russia president.

Supporters of many right-wing populist parties in Hungary, Germany, Slovakia, the Netherlands and Sweden are all at least 20 percentage points more likely than nonsupporters to express confidence in Putin on the world stage.

Still, even among those who express a positive view of populist parties, ratings for Putin tend to be low. Take Spain’s right-wing Vox party: While supporters of the party are more likely than nonsupporters to voice confidence in Putin, two-thirds of Vox supporters nonetheless say they lack confidence in the Russian president.

Generally speaking, parties that hold more seats in national legislatures or are part of governing coalitions tend to have more hopeful supporters. This is especially true among those who favor right-wing parties. For example, supporters of Fidesz, which holds two-thirds of seats in Hungary’s Parliament and leads a majority government there, are far more confident in the future of their culture than other Hungarians (a 33-point difference). By contrast, supporters of most other right-wing parties included in the survey – which have less control in national legislatures – are less positive on this question than nonsupporters are.