Europe and the United States are major destinations for the world’s immigrants. In both places, debates about immigration policy have focused on what to do with unauthorized immigrants. These debates can center on national policies, as well as policies for Europe as a whole.

The size of Europe’s unauthorized immigrant population in 2017 was less than half the number in the U.S., according to an analysis of newly released Pew Research Center estimates for Europe and the Center’s existing U.S. estimates. 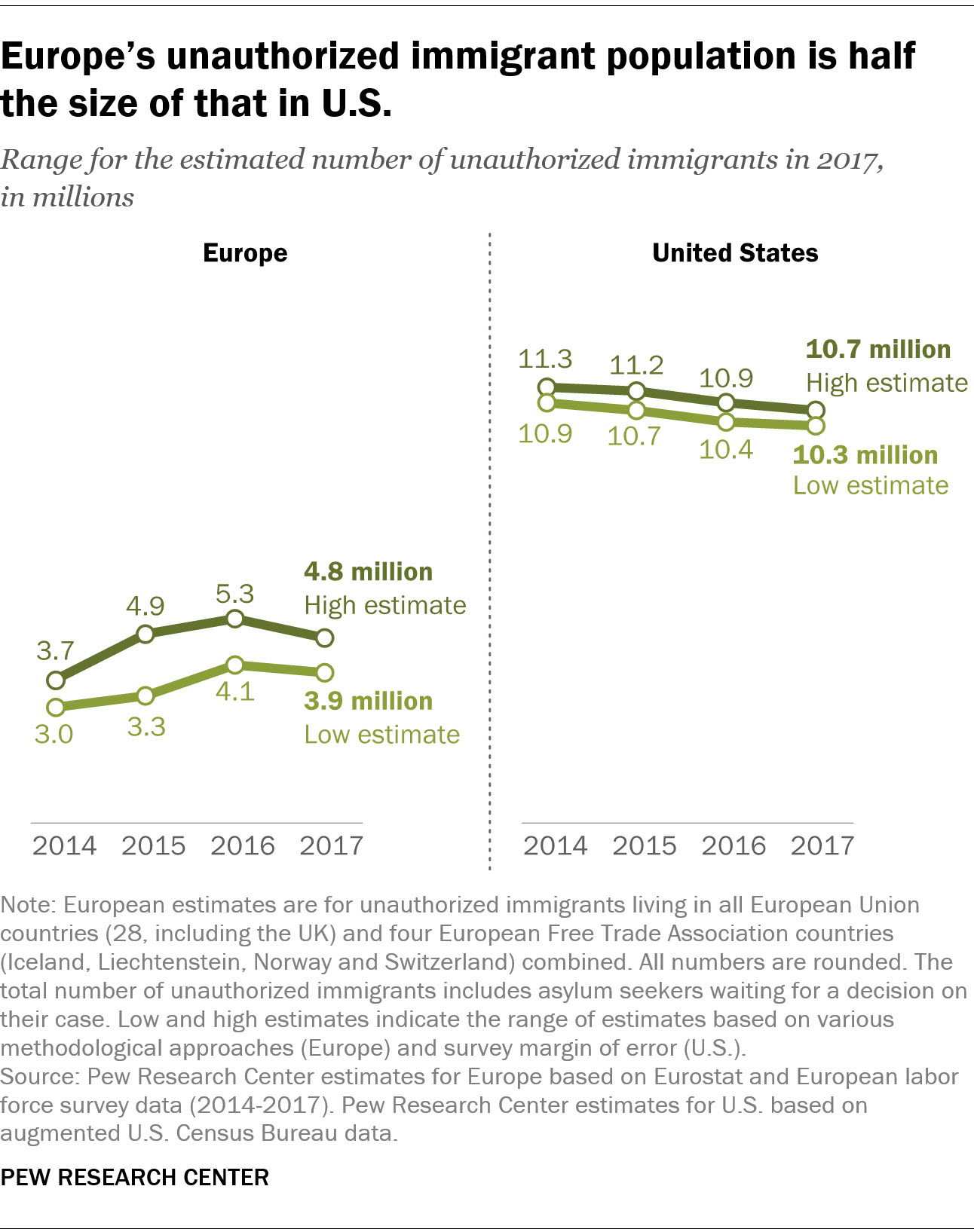 Unauthorized immigrants represent a relatively small part of the population in both places, though the share is smaller in Europe. Less than 1% of Europe’s 500 million people were unauthorized immigrants in 2017, compared with 3% of 325 million in the United States. (Europe consists of European Union countries including the UK, and the European Free Trade Association countries of Iceland, Liechtenstein, Norway and Switzerland.)

Q&A and video: How we estimated the number of unauthorized immigrants

5 facts about unauthorized immigrants in Europe

Asylum seekers waiting for a final decision make up some of the unauthorized immigrant population in both Europe and the U.S., but to differing degrees. While the numbers are similar in both places, asylum seekers comprise a much larger share of Europe’s unauthorized immigrant population (20% to 24%) than in the U.S. (about 9%). Also, children born to unauthorized immigrants in Europe are generally considered unauthorized themselves, because most European countries do not have birthright citizenship (though these children are protected from deportation in many European countries). In the U.S., everyone born in the country is an American citizen, regardless of their parents’ immigration status.

In both the U.S. and Europe, immigrants have generally followed similar paths to unauthorized status. Many crossed borders without permission, while others entered with a valid visa but stayed beyond the expiration date. These visa overstayers are a large share of the unauthorized immigrant population in both places, and their numbers have grown in the U.S.

Unauthorized immigrants are people living in a country without citizenship and without a residency permit. Who counts as an unauthorized immigrant is subject to debate, in part because immigration policies vary by country. Some argue for a broad global definition that includes anyone who entered the country without authorization and has yet to receive permanent residency. Narrower definitions exclude those with legal protection from deportation, even if the protection is temporary.

When deciding who counts as an unauthorized immigrant, Pew Research Center takes into account whether a person entered a country without authorization and their chances of gaining permanent residency. For example, those with a deferred deportation order may have a legal right of residence and be allowed to work, but they are still included as unauthorized immigrants since most entered without permission and have an uncertain future in the country. Similarly, asylum seekers with a pending decision on their asylum application are counted as unauthorized immigrants because many entered Europe or the U.S. without authorization and asylum rejection rates are high.

The Center uses an approach that considers a combination of authorized entry, legal certainty and likely permanency. In the United States, estimates include unauthorized immigrants with deportation relief – for example, those with Deferred Action for Childhood Arrivals (DACA) and Temporary Protected Status (TPS) – as well as asylum seekers waiting for a decision on their cases. Although these groups are authorized to work, many entered without permission, and their legal future in the U.S. is uncertain.

Major demographic differences between unauthorized immigrants in Europe and the U.S. 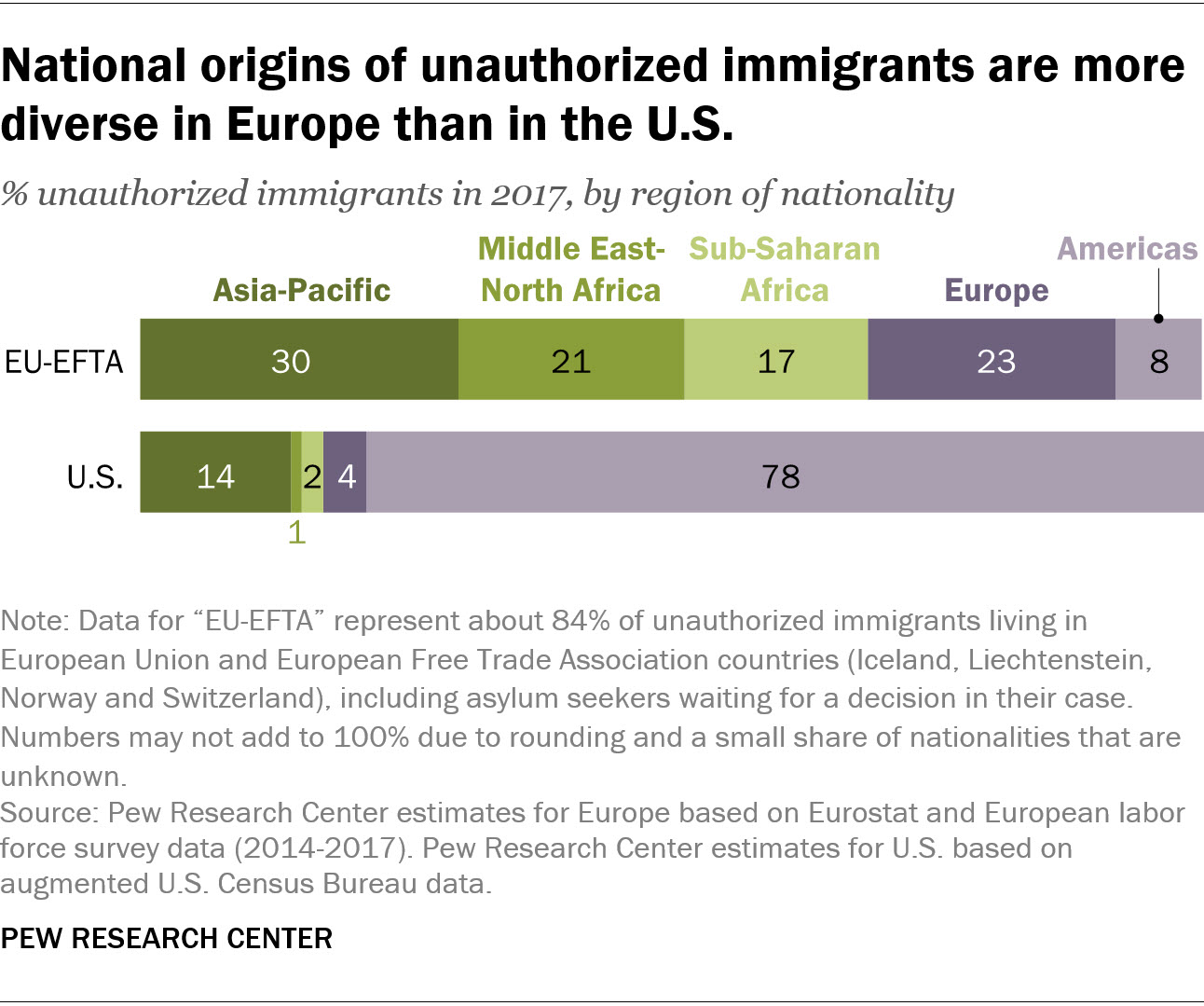 Unauthorized immigrants living in Europe in 2017 came from more diverse origins than those in the United States. No region accounted for even a third of unauthorized immigrants in Europe, due in part to Europe’s proximity to many regions. Meanwhile in the more geographically isolated U.S., about eight-in-ten came from the Americas, with about half from Mexico alone.

In Europe, most unauthorized immigrants (56%) had lived in their European countries for less than five years as of 2017. About half of these newer arrivals are waiting for a decision on their asylum application. By contrast, a much smaller share of the unauthorized immigrant population in the U.S. (20%) has lived in the country for less than five years. The majority came prior to the Great Recession.