Black and Hispanic adults remain less likely than whites to say they own a traditional computer or have high speed internet at home, according to a Pew Research Center survey conducted in early 2019. But smartphones are playing a role in helping to bridge these differences. 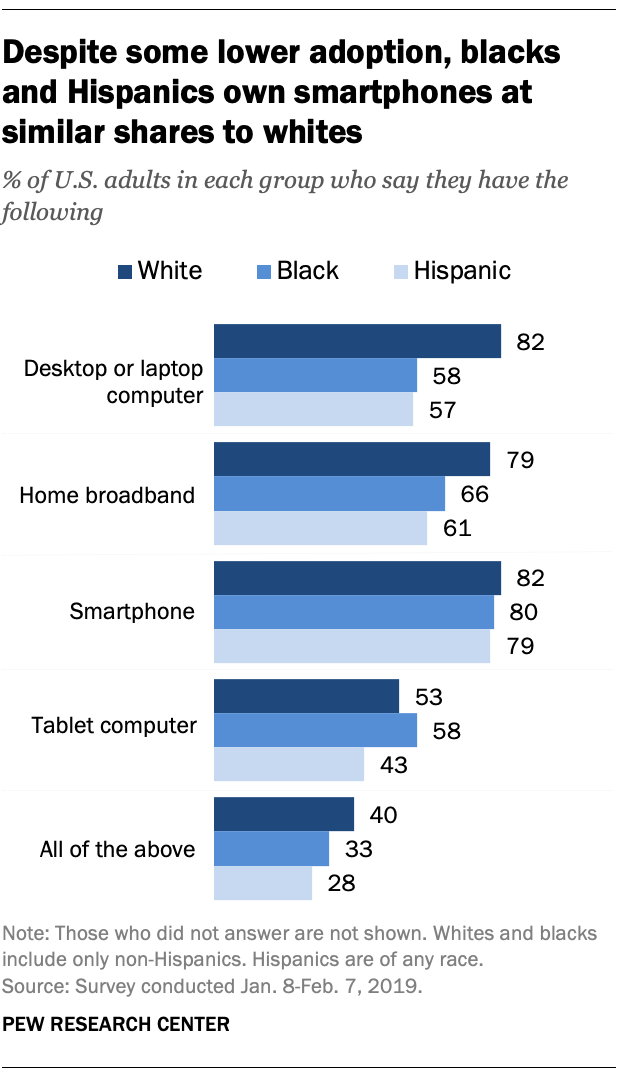 Roughly eight-in-ten whites (82%) report owning a desktop or laptop computer, compared with 58% of blacks and 57% of Hispanics. There are also substantial racial and ethnic differences in broadband adoption, with whites being more likely than either blacks or Hispanics to report having a broadband connection at home. (There were not enough Asian respondents in the sample to be broken out into a separate analysis.)

Mobile devices play a larger role for black and Hispanic people when it comes to their online access options. Some 25% of Hispanics and 23% of blacks are “smartphone only” internet users – meaning they lack traditional home broadband service but do own a smartphone. By comparison, 12% of whites fall into this category.

In addition, blacks and Hispanics are more likely than whites to rely on their smartphones for a number of activities, such as seeking health information or looking for work, according to a Pew Research Center survey from late 2014. Although smartphones help bridge internet access gaps, other 2014 Pew Research Center data shows that blacks, Hispanics and lower-income smartphone users are about twice as likely as whites to have canceled or cut off service because of the expense.

Smartphones are not the only way those without traditional access options attempt to bridge these gaps. For black Americans in particular, libraries can play an important role: 42% of black library users say they use libraries’ computers and internet connections, compared with one-quarter of whites and 24% of Hispanics, according to 2016 Center data. And blacks and Hispanics express pronounced interest in getting training that would help improve their digital skills. Some 46% of blacks and 48% of Hispanics say training to help them be more confident in using computers, smartphones and the internet would help “a lot” in terms of making important decisions, compared with 20% of whites.

Digital divide persists even as lower-income Americans make gains in tech adoption
Digital gap between rural and nonrural America persists
Smartphones help those without broadband get online, but don’t necessarily bridge the digital divide
Many Americans, especially blacks and Hispanics, are hungry for help as they sort through information
Disabled Americans are less likely to use technology