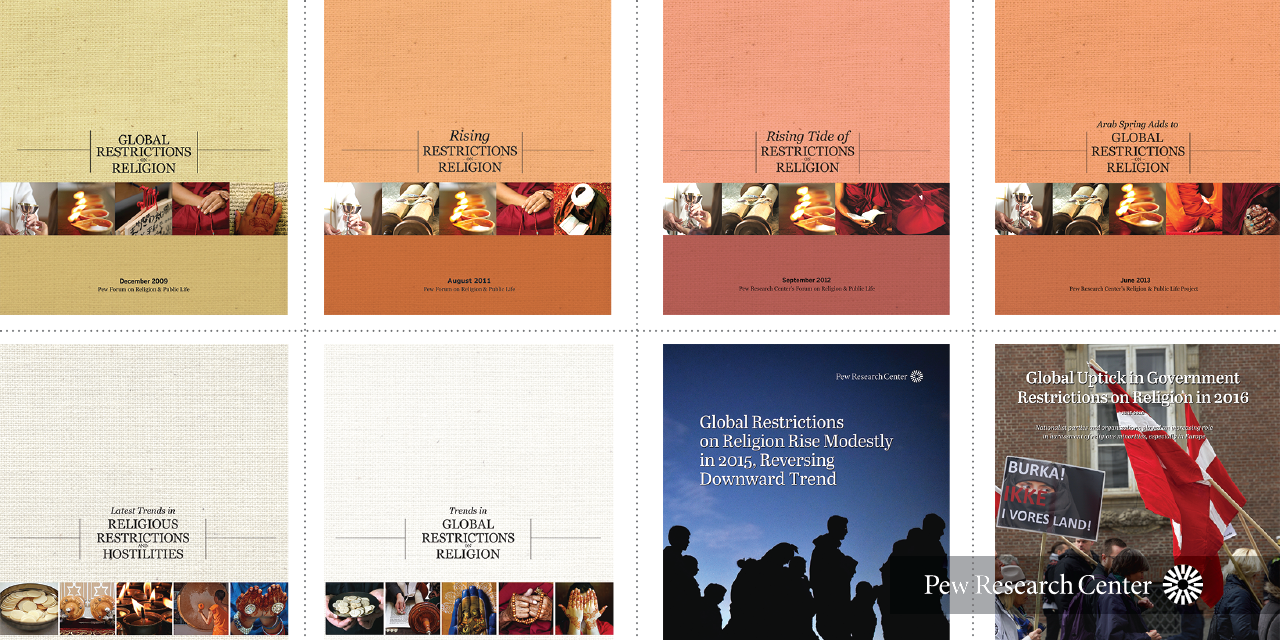 Pew Research Center just published its 10th annual report analyzing restrictions on religion (by both governments and individuals or groups in society) around the world. This year’s report differs from past reports because it focuses on changes that have occurred over the course of a decade, covering 2007 to 2017, rather than emphasizing year-to-year variations. Another new approach this year involves splitting each of two broad types of religious restrictions – government restrictions and social hostilities – into four subcategories. This provides a clearer picture of the specific types of religious restrictions that people face – and how they are changing over time.

2Social hostilities involving religion have increased in a few categories, but levels of interreligious tension and violence, also known as sectarian or communal violence, have declined globally. In 2007, 91 countries experienced some level of violence due to tensions between religious groups, such as conflict between Hindus and Muslims in India, but by 2017 that number dropped to 57 countries. However, harassment by individuals and social groups, religious violence by organized groups, and hostilities related to religious norms (for example, harassment of women for violating dress codes) have all been on the rise. For details on these categories, see the full report. 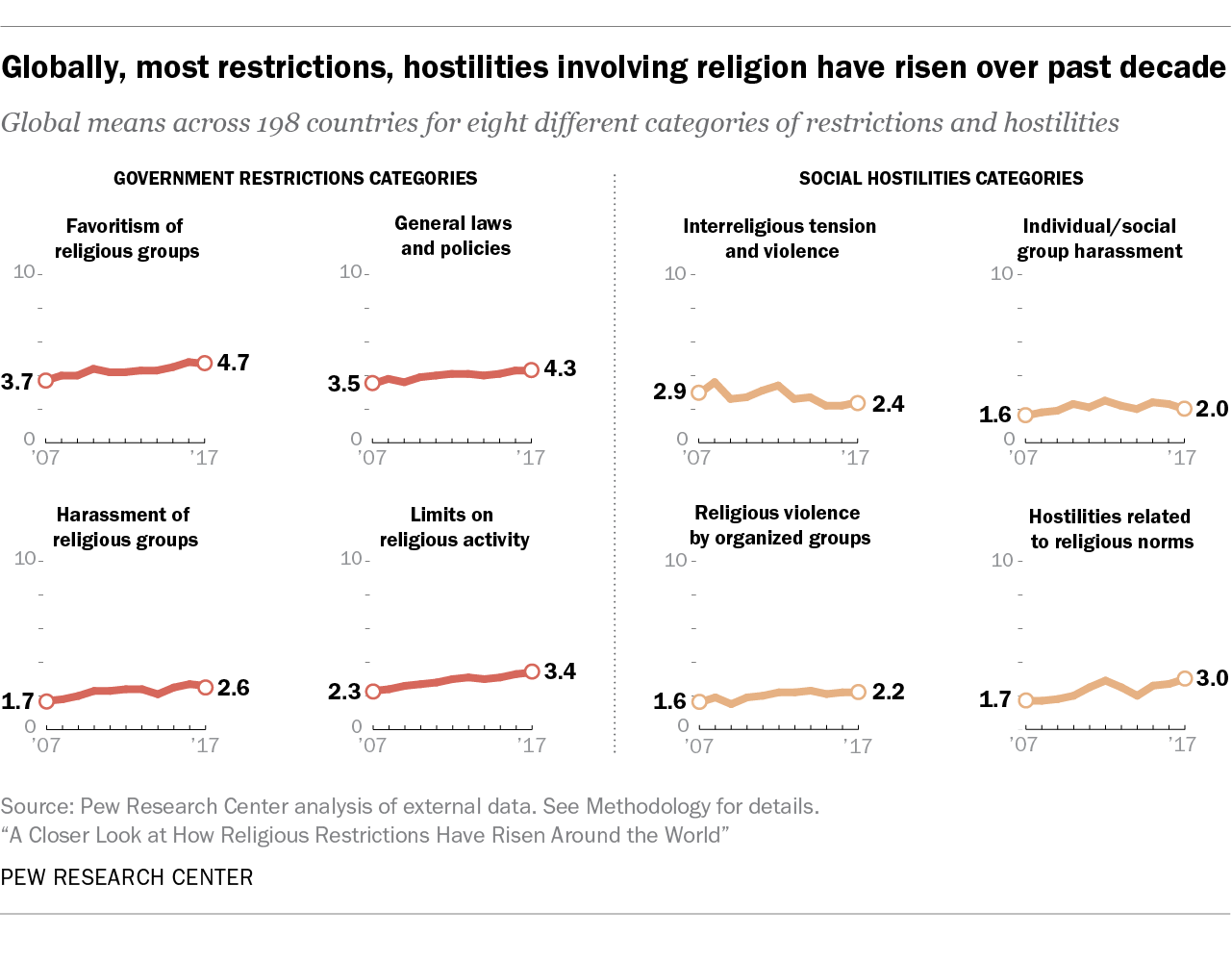 3The level of religious restrictions is highest in the Middle East-North Africa region in all eight categories measured by the study. The gap between the Middle East and all other regions is particularly large when it comes to government favoritism of religious groups: 19 of the 20 countries in the Middle East favor a religion (Lebanon is the exception). In addition, the average score for government harassment in the Middle East-North Africa region has increased by 72% during the period covered by the report. This includes instances such as such as criminal prosecutions of Ahmadis or members of other minority sects of Islam. The levels of religious violence by organized groups (such as terrorist groups) also have spiked in the region. In 2017, 11 Middle Eastern countries were recorded as having more than 50 incidents of religion-related terrorism, including deaths, injuries, detentions and property damage. This is up from four countries in 2007.

4In certain categories, some of the biggest increases in religious restrictions over the past decade have occurred in Europe and sub-Saharan Africa. Europe’s average score measuring government limits on religious activity has doubled, and its score in the government harassment of religious groups category has gone up by about 70%. Meanwhile, sub-Saharan Africa’s score measuring government favoritism of religious groups has increased by more than 50%, and both regions have experienced marked rises in social hostilities related to religious norms. For example, in 2017, armed men entered classrooms in multiple schools in Burkina Faso and threatened to kill teachers if they did not teach the Quran to their students. And in Ukraine in 2015, separatists held four Jehovah’s Witnesses at gunpoint, subjected them to beatings and mock executions and forced them to confess Orthodox Christianity as the only true religion. 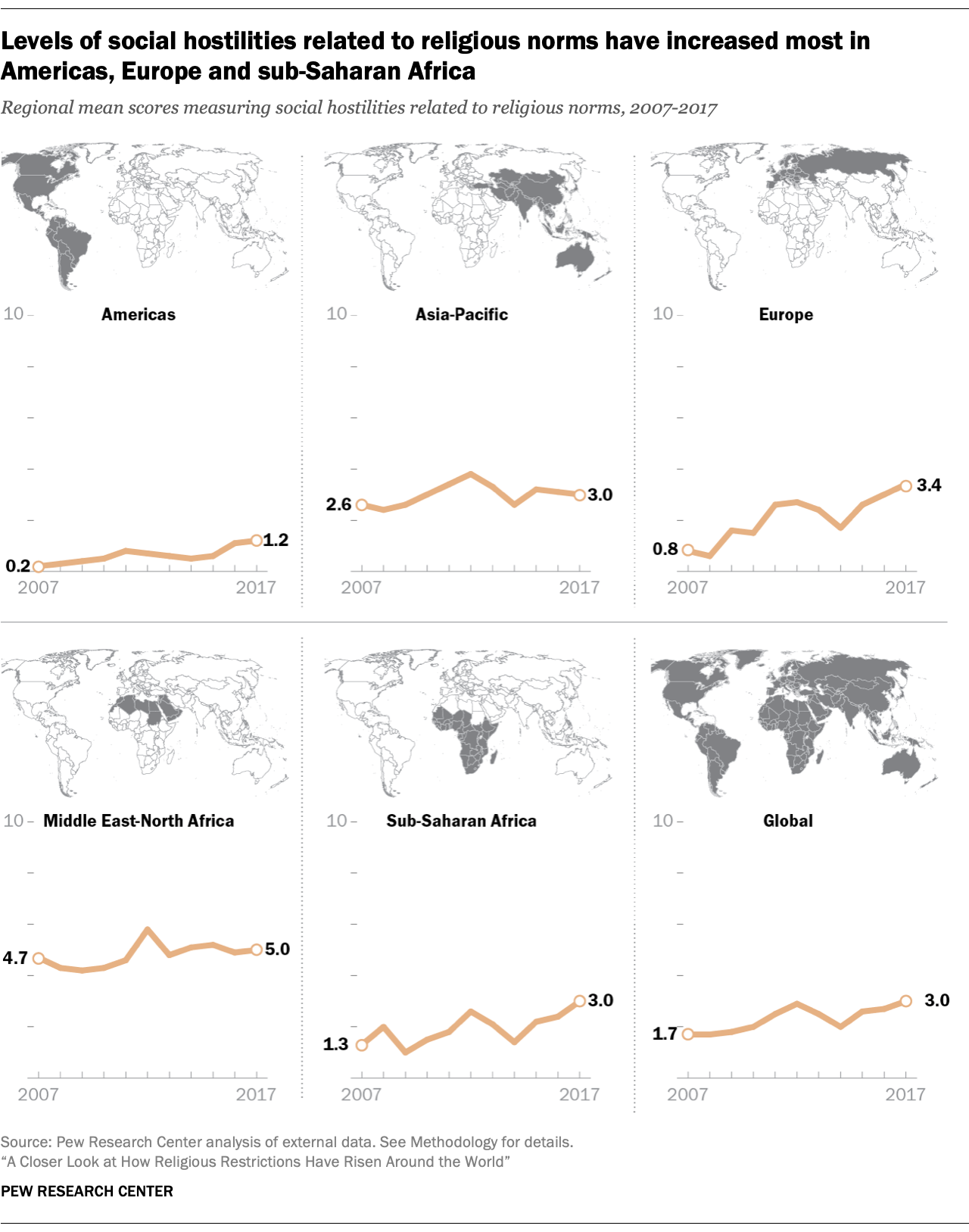 5Some countries have similar scores when it comes to religious restrictions, but the reasons behind them can be very different. One example: France and Qatar have similar overall government restrictions scores (both are in the “high” category”), but France, which is officially a secular state, scores low in the category of government favoritism, while Qatar, where Islam is the state religion, scores much higher. Qatar also scores higher than France when it comes to limits on religious activities, which include laws that target non-Islamic faiths by restricting public worship, the display of religious symbols and proselytization. Meanwhile, France scores higher than Qatar when it comes to general government harassment of religious groups, which includes enforcing restrictions on religious dress. France continues to have a national ban on full-face coverings in public, and local authorities also impose various dress restrictions that mostly affect Muslim women.