While most Americans are concerned about the negative impact made-up news and information has on the country, Republicans and Democrats are particularly divided on how closely they connect it to the news media or to President Trump, according to a Pew Research Center survey conducted Feb. 19 to March 4, 2019. 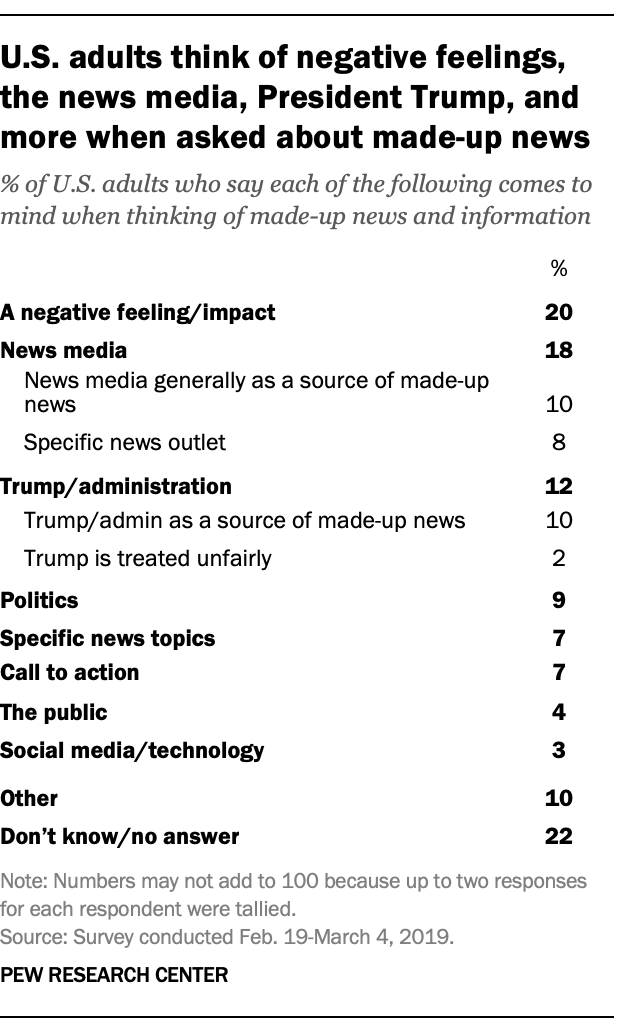 The survey asked Americans to share what first comes to mind when they think about made-up news and information. The first two distinct answers given by each respondent were included in the analysis. An analysis of specific news outlets was also conducted by tallying the first three news outlets, if any, that were named in either answer.

Reflecting the general concern people have about this issue, one-in-five U.S. adults respond with a negative feeling, saying made-up news is “wrong,” “unethical” or “bad for democracy.” About the same share (18%) mention the news media, either generally as a source of made-up news (10%), or by calling out a specific news outlet (8%), with 4% naming Fox News, 3% CNN, and no more than 1% naming any other specific outlet:

“Mainstream media news outlets clearly intend to only report one political side of the story with bias, not facts.”

“I feel very angry towards these news sources and tend not to trust them.”

“24 hour news stations on all sides of the political spectrum.”

“I think a lot of what President Trump says is made up as he goes along. So much is exaggerated or very misleading or false!!”

“Anything reported from the White House or the current administration is probably not true, or at the very least, facts are changed to mislead the public.”

“Everything they report about the president. They don’t tell the whole story.”

No more than one-in-ten gave any other response. About one-in-ten U.S. adults (9%) associate made-up news with politics generally, the political parties or individual politicians, though no more than 1% named either party or any individual politician outside of the Trump administration. Another 7% cite news topics, such as immigration or climate change, while 7% call for something to be done, saying made-up news should be “restricted,” “stopped” or its publishers “prosecuted.” Smaller shares say the public’s ability to recognize made-up news or its role in spreading it (4%), or social media sites, such as Twitter or Facebook (3%), come to mind when thinking about made-up news:

“Political parties with an agenda trying to sway public opinion on an issue.”

“I find it scary that most of the public just takes false information and believes it. They do not even care enough to research or list or read different sources.”

“Social media sites serve to amplify information that is not fact checked at all.”

Certain segments of the population, though, diverge on what they tie to the issue of made-up news and information, with some of the most notable differences occurring along party lines. As previous research has shown, Republicans and Democrats hardly see eye to eye in their views of the news media and President Trump – a split that extends to how often members of each party connect these actors to made-up news. 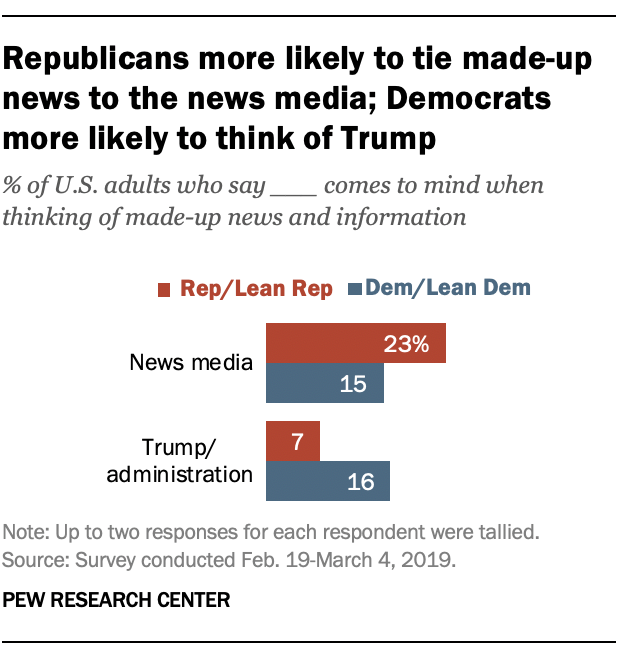 Note: Topline of the survey question is available here (PDF). For more information, read the full report and see its methodology.