The public’s views of Donald Trump have changed little over the course of his presidency – and this is the case for opinions about whether Trump has done enough to distance himself from white nationalist groups. 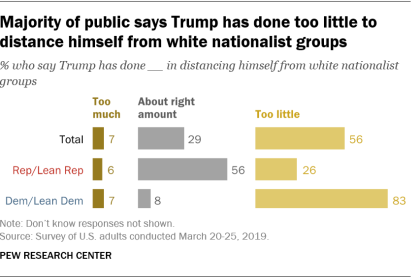 The survey by Pew Research Center, conducted March 20-25 among 1,503 adults, finds that 40% approve of the way Trump is handling his job as president, little changed since January (37%). The survey was largely completed when Attorney General William Barr announced March 24 that special counsel Robert Mueller had found no evidence that Trump’s presidential campaign conspired with Russia to influence the 2016 election. Trump’s job rating was not significantly different in the days following the release of Barr’s report (March 24-25) than before his announcement (March 20-23).

Trump’s job rating continues to be more stable – and more polarized along partisan lines – than those of past presidents. Currently, 81% of Republicans and Republican-leaning independents approve of Trump’s job performance, while 88% of Democrats and Democratic leaners disapprove. 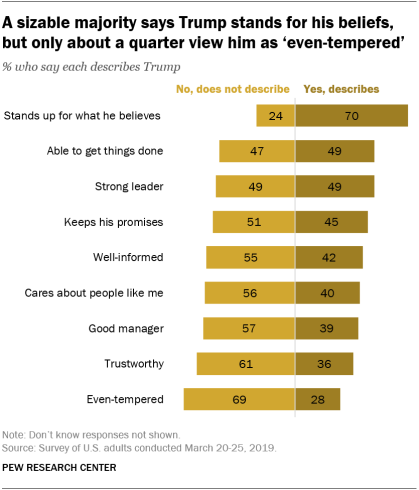 Similarly, assessments of Trump’ s personal traits and characteristics, including his trustworthiness, leadership and ability to get things done, have not changed much over the course of his presidency. Trump continues to get low ratings for his temperament: Just 28% of Americans say he is even-tempered, while 69% say that description does not apply. A somewhat larger share (36%) says Trump is trustworthy; a majority (61%) says Trump is not trustworthy.

By contrast, most Americans say Trump stands up for his beliefs (70%). They are divided in evaluations of his effectiveness and leadership; 49% say he is able to get things done, while an identical share says that Trump is a strong leader.

The survey – which, again, was largely completed before Barr’s report on the Mueller investigation – finds that 64% of Americans say that Trump definitely (33%) or probably (31%) has done something illegal while in office or when he was running for president.  Only half as many (32%) say he definitely or probably has not done things that are illegal. 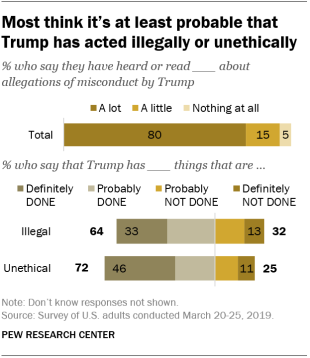 An even larger share (72%) thinks Trump definitely or probably has done something unethical – with 46% saying he has definitely done this.

As the new Congress approaches the 100-day mark, the public generally has negative views of both Democratic and Republican leaders. Just a third approve of the job performance of Democratic congressional leaders, while 59% disapprove. Job ratings for GOP leaders are similar (31% approve, 63% disapprove). 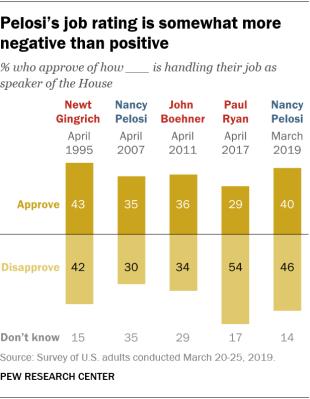 While evaluations of Trump’s personal characteristics are sharply divided along partisan lines, there are smaller gaps on two personality traits: his temperament and whether he stands up for his beliefs. Fewer than half in both parties view him as even-tempered, while majorities of both Republicans and Democrats say Trump stands up for his beliefs. 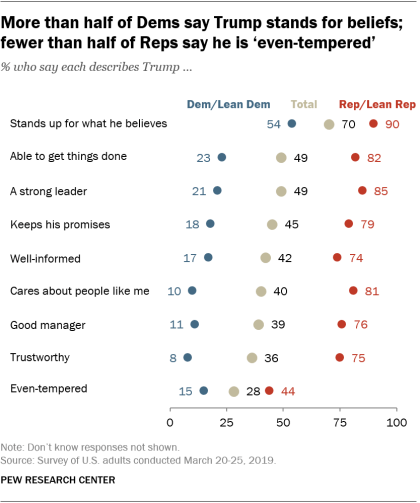 Trump receives positive ratings from large majorities of Republicans and Republican-leaning independents (70% or more) on seven of eight personal traits, including his ability to get things done (82%) and his managerial skills (76%). Republicans rank Trump lowest on his temperament: 44% say the phrase even-tempered describes the president; about as many (49%) say he is not even-tempered.

Views of Trump’s personal traits among Democrats and Democratic leaners continue to be overwhelmingly negative. For instance, few Democrats say Trump is able to get things done (23%), a strong leader (21%) and trustworthy (8%). Still, a little more than half of Democrats (54%) say Trump stands up for what he believes in. 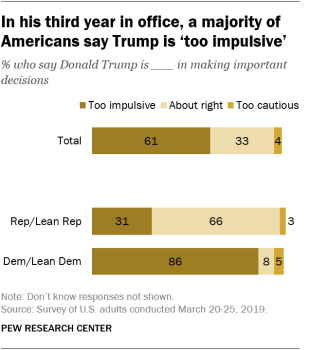 Trump’s overall job approval has changed little since the beginning of his presidency. Currently, 55% of Americans disapprove of his job as president, while 40% approve.

While men are evenly split in their views of Trump’s job performance (47% approve, 47% disapprove), women are far more likely to disapprove (63%) than approve (32%).

Large majorities of blacks (84%) disapprove of the way Trump is handling his job; whites continue to be divided over Trump’s job performance (50% approve, 46% disapprove).

By contrast, black Protestants and the religiously unaffiliated overwhelmingly disapprove of how Trump is handling his job as president (87% and 67%, respectively). White mainline Protestants are divided (49% approve, 47% disapprove).

Majorities of Americans say it is likely Trump has done things that are unethical (72%) or illegal (64%) during his time in office or while he was campaigning for president. As noted, this survey was largely finished before Attorney General Barr announced that special counsel Robert Mueller had found no evidence of collusion between the Trump campaign and Russia in 2016.

Nearly three-in-ten (29%) Republicans and Republican leaners say Trump definitely or probably has done things that are illegal during his time in office or while he was running for president. Nearly half (45%) say that he probably or definitely has behaved unethically. 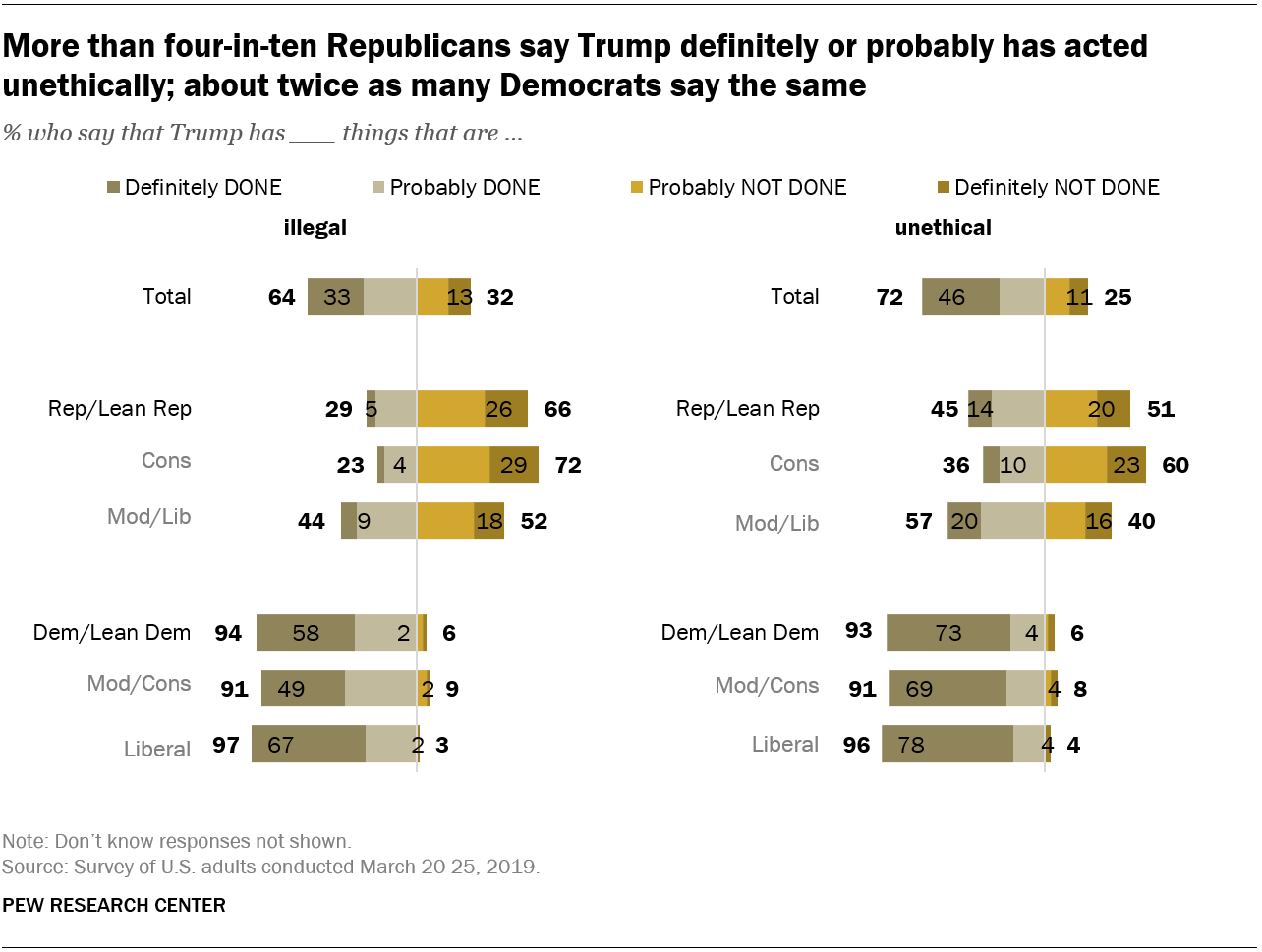 Opinions about Trump’s respect for the country’s democratic institutions and traditions mirror his overall job approval. Overall, 59% of adults say Trump has not too much (26%) or no respect at all (32%) for the county’s democratic institutions. A smaller share (40%) says he has either a great deal (16%) or a fair amount (24%) of respect for these institutions. These attitudes have changed very little since October 2016, before he was elected president. 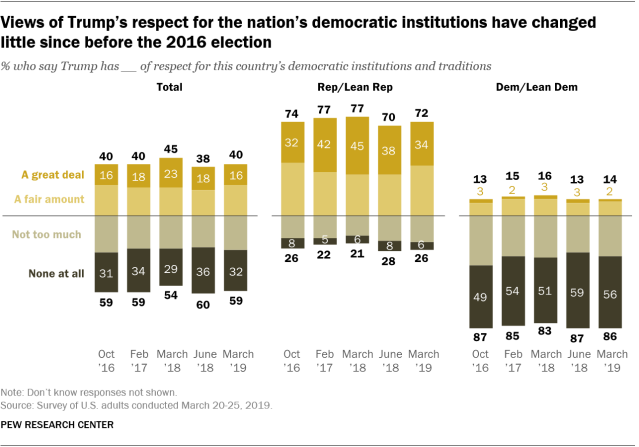 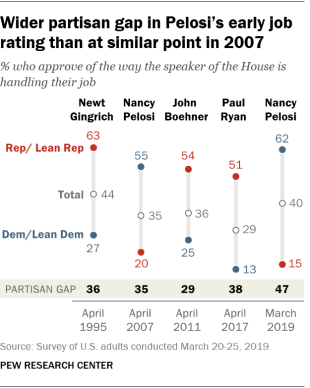 Early in her tenure as House Speaker, Nancy Pelosi’s job rating is deeply divided along partisan lines. In fact, the partisan gap in views of Pelosi are as wide as for any recent House speaker dating to Newt Gingrich (trend data are not available for Dennis Hastert).

About six-in-ten Democrats (62%) approve of Pelosi’s job performance. Pelosi’s job rating among members of her own party is much higher than Paul Ryan’s and John Boehner’s were in their tenure. And her current job rating among Democrats is slightly higher than her rating in April 2007, when she first served as speaker. Among recent speakers, only Gingrich’s job rating was as high among members of his own party (63%).

By contrast, just 15% of Republicans approve of Pelosi’s job performance, which is about as low as Ryan’s among Democrats two years ago (13%).

When asked about congressional leaders generally, a third of the public approves of the job Democratic (33% approve) and Republican leaders (31%) in Congress are doing. 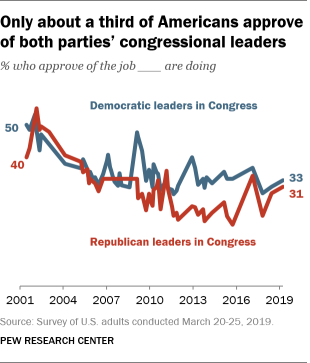 Members of both parties have much more positive jobs ratings for the congressional leaders of their own party than the opposing party.

In contrast, just 13% of Democrats approve of the job Republican leaders are doing. These views have not changed significantly in recent years. 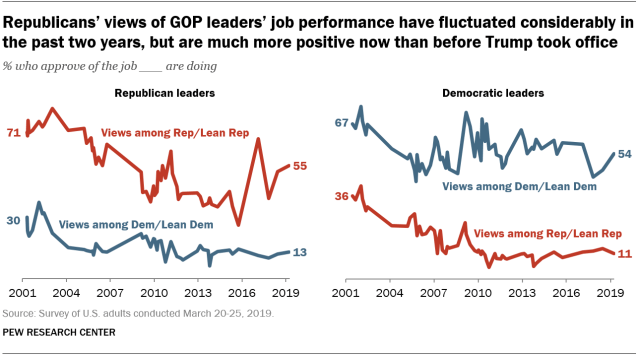 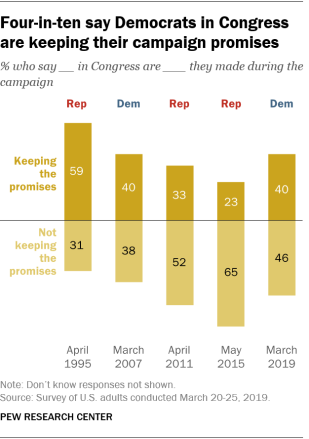 That is a more positive verdict from the public than congressional Republicans received after their 2014 and 2010 victories, when majorities said they were not keeping campaign promises (65% said this in May 2015, 52% in April 2011). After the Democrats won Congress in 2006, the public was divided on whether they kept their promises (40% said they did, 38% said they did not).

Neither party has come close to the positive views of the GOP after they gained control of Congress in the 1994 midterm. In April 1995, 59% of the public said Republicans were keeping their campaign promises; just 31% said they were not.

Democrats are about as positive about their party keeping its promises as they were in 2007, after the 2006 midterm. In March 2007, 57% of Democrats said congressional Democrats were keeping their promises – about the same share as say that today.