The use of smartphones and social media increased rapidly in the past decade in the United States, and these digital technologies have also become common in parts of the developing world. A new Pew Research Center report analyzes public attitudes and experiences related to these technologies in 11 emerging economies – including the benefits and challenges that digital connectivity brings to people’s lives and societies.

Here are seven takeaways from the report: 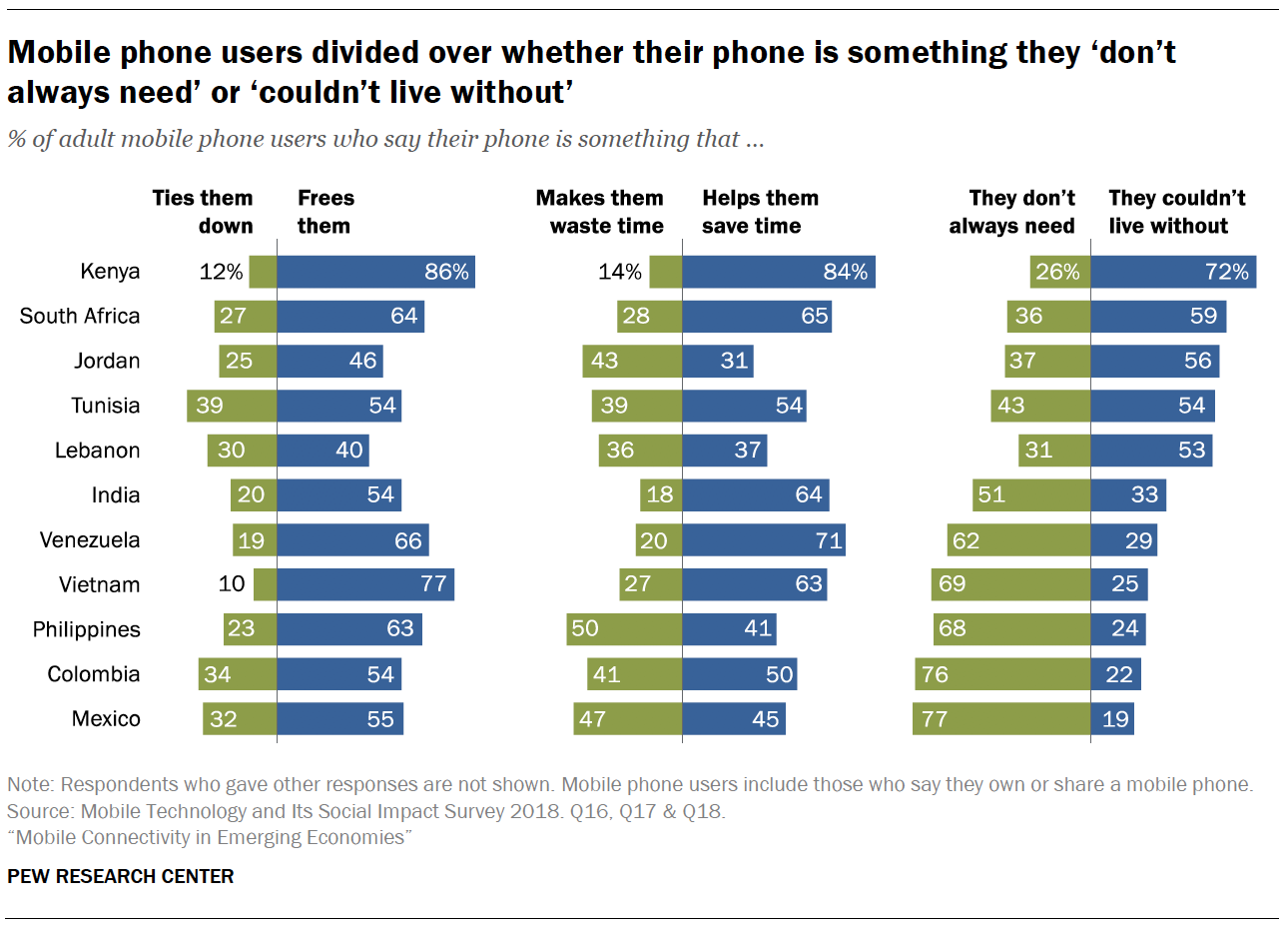 3Those in every country surveyed worry about the impact of mobile phones on children. Across these 11 emerging economies, a median of 79% of adults say people should be very concerned about children being exposed to harmful or immoral content when using their phones. In most countries, half or more say mobile phones and the internet have had a bad impact on children – more than the percentage who say they are concerned about the influence of technology on other facets of society included in the survey, such as politics, local culture and morality. 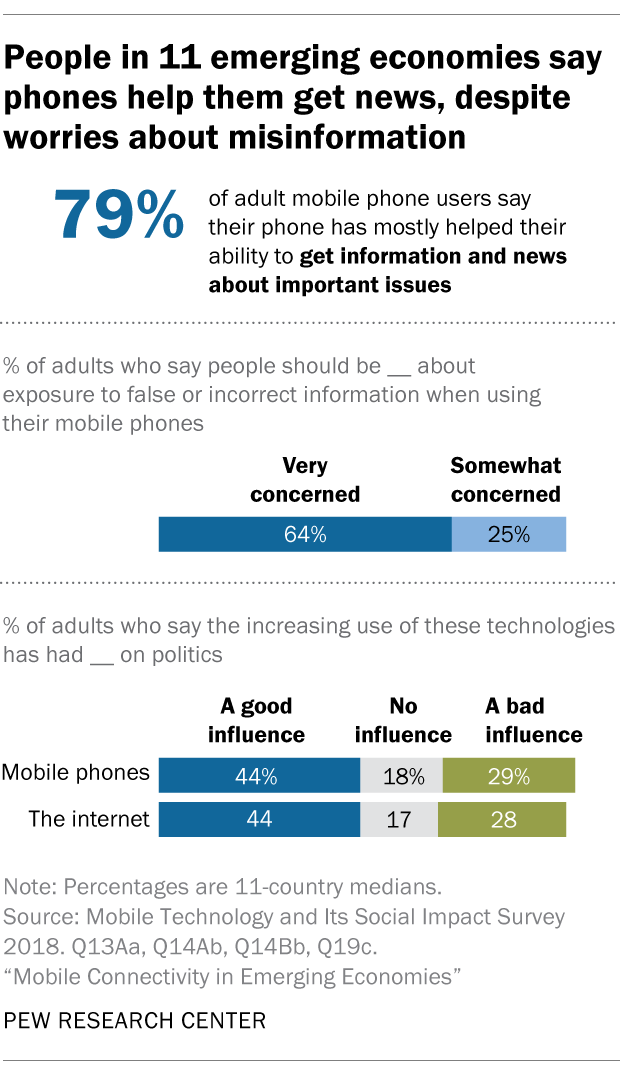 While mobile phone users largely agree that their phones help them get news, many are concerned about the spread of misinformation when using their phone. A median of 79% of mobile phone users across the 11 countries surveyed say their mobile phones have helped them get information and news about important issues. Smartphone users are particularly likely to say their devices bring these benefits compared with those with more basic devices. But, these perceived benefits can often coexist with concerns. A median of 64% of adults also say people should be very concerned about exposure to false or incorrect information when using their mobile phones.

More broadly, people in these emerging nations are somewhat divided about the impact of mobile phones and the internet on politics: A median of 44% of adults each say the increasing use of mobile phones and the internet have had a good influence on politics, while a median of about three-in-ten say each has had a bad influence. 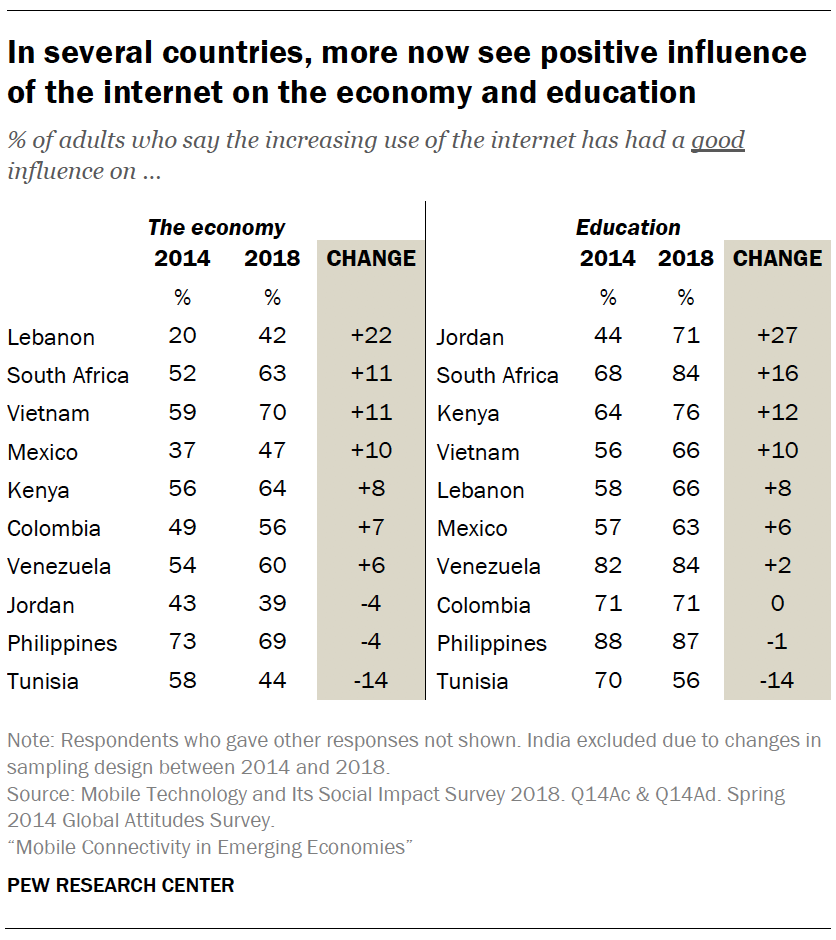 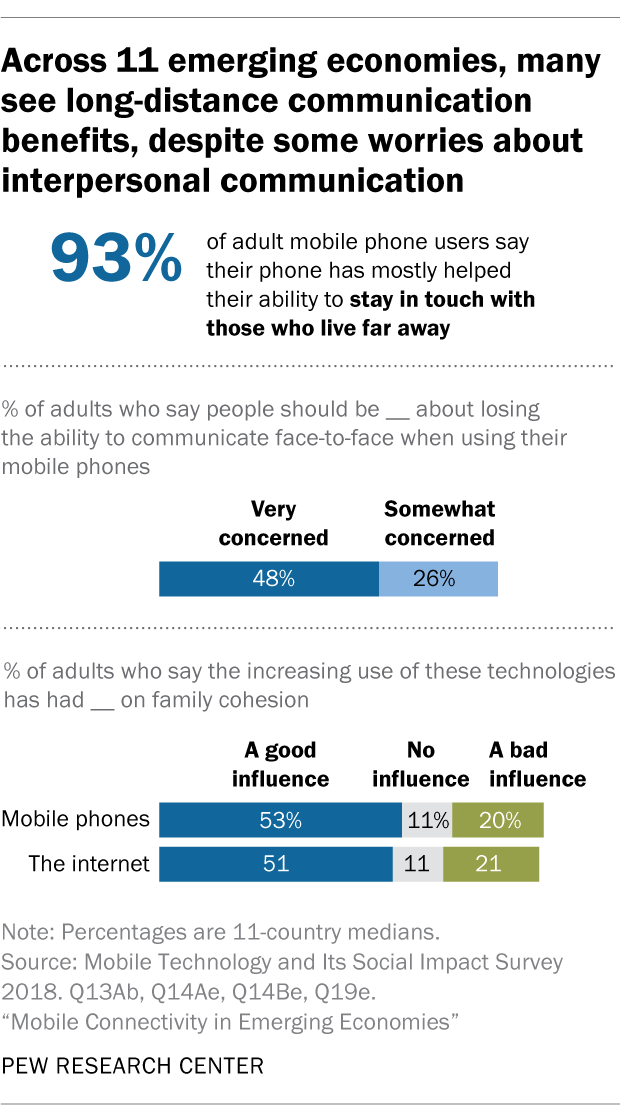 6Mobile phone users say their devices help them stay in touch with those who live far away. In every country surveyed, about nine-in-ten or more say their phones have helped them in this regard. At the same time, a median of 53% of adults across the 11 countries surveyed say the increasing use of mobile phones has had a good influence on family cohesion, compared with a median of 20% who say it has had a bad influence. People are similarly positive about the impact of the internet on family cohesion.

Even so, a notable share of adults express concerns about the impact of mobile phones on interpersonal communication. For instance, a median of 48% of adults say people should be very concerned about people losing the ability to communicate face-to-face when using their mobile phones. And in focus groups conducted as part of the study, some participants highlighted examples of their children texting from the room next door rather than talking to their family.

7Facebook and WhatsApp are among the most widely used digital platforms in the countries surveyed. Asked about seven social media platforms and messaging apps, a median of 62% of adults in these countries report using Facebook, and a median of 47% say they use WhatsApp. Both of these sites are widely used in a number of countries but are especially popular in Jordan and Lebanon.

As is true with other forms of digital technology, use of these social media platforms often varies substantially by age. For example, 91% of 18- to 29-year-old Vietnamese say they use Facebook, compared with just 23% of those ages 50 and older.

How focus groups helped inform our survey about technology use in emerging economies
Emerging nations catching up to U.S. on technology adoption, especially mobile and social media use
In India, few use social media to share political views
8 charts on internet use around the world as countries grapple with COVID-19
Misinformation and fears about its impact are pervasive in 11 emerging economies