On Jan. 1, 1993, Czechoslovakia peacefully split into the Czech Republic and Slovakia, an event sometimes called the “Velvet Divorce.” But despite having been one nation for roughly 75 years, the two countries have very different religious profiles, according to a recent Pew Research Center study. 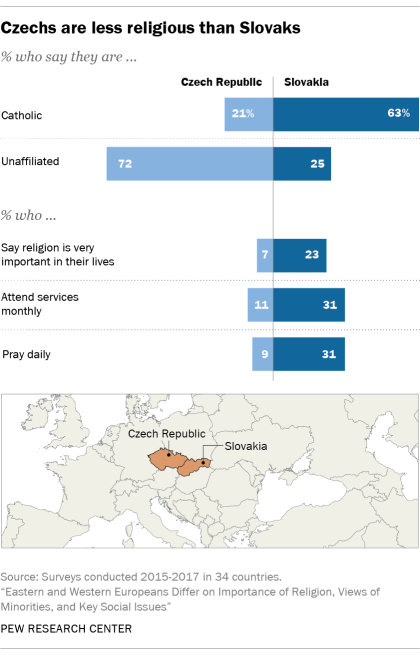 While Slovakia is majority Catholic (63%), around seven-in-ten Czechs (72%) are religiously unaffiliated – the highest share of unaffiliated adults in 34 European countries surveyed by the Center. In addition, far more people in Slovakia than in the Czech Republic say they believe in God (69% and 29%, respectively).

The Czech Republic’s largely secular religious landscape is a result of dramatic declines over time in the share of adults who identify as Catholic. In a survey conducted in 1991 by the Times Mirror Center for the People & Press, Pew Research Center’s predecessor organization, 44% of Czech speakers in Czechoslovakia identified as Catholic. Around half that many (21%) identify as Catholic in the Czech Republic today.

In addition to being predominantly Catholic, Slovaks also are consistently more religiously observant than Czechs. For instance, there is at least a 20-percentage-point difference between the two nations in the shares who say they pray daily (31% of Slovaks vs. 9% of Czechs) and attend religious services at least monthly (31% vs. 11%). And Slovaks are more likely to say religion in very important in their lives (23% vs. 7%). 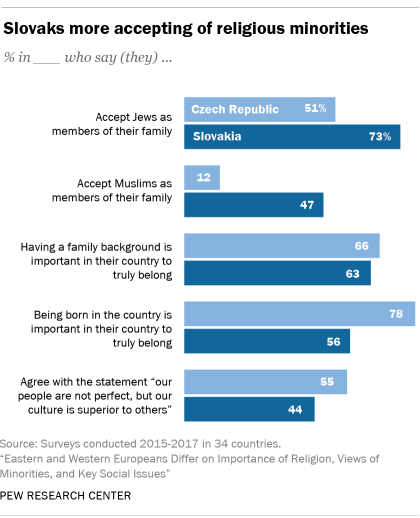 On questions of nation and culture, Czechs are generally more likely than Slovaks to agree with nationalist statements. While similar shares in both nations say that having a family background from their country is “very” or “somewhat” important to being a true national (i.e., to being truly Czech), more Czechs than Slovaks say being born in their country is important (78% vs. 56%). And more Czechs than Slovaks agree with the statement “Our people are not perfect, but our culture is superior to others” (55% vs. 44%).

While Slovaks appear to be more accepting of religious minorities and less nationalistic on some measures, Czechs are in some areas less socially conservative. Strong majorities of Czechs say abortion should be legal in all or most cases (84%) and that gays and lesbians should be allowed to marry legally (65%). A smaller majority in Slovakia supports legal abortion (70%), and fewer than half of Slovaks support same-sex marriage (47%).

In addition to their differences over religion and other issues, Czechs and Slovaks differ ethnically and culturally. These as well as political, economic and other reasons led Slovakian political leaders to push to break away from Czechoslovakia after the collapse of communism in 1989.