For views of issues in the 2019 summit, see “How people in G20 nations see key issues ahead of this year’s summit.”

Political leaders from 19 member countries and the European Union will gather in Buenos Aires this Friday for the annual G20 summit. As always, the agenda will feature both economics and geopolitics. U.S. President Donald Trump will attend and is expected to meet individually with Chinese President Xi Jinping and Russian President Vladimir Putin, among others.

Here are findings from a 2018 Pew Research Center survey that show how people around the world view some of the issues likely to be discussed at the meeting – particularly their attitudes on the economy, the future of work, and trade – as well as their opinions of world leaders who will be present.

1The global economic mood has improved somewhat in recent years, but many are still pessimistic about the future. In the United States, Japan and several European nations, economic confidence has rebounded from the depths of the Great Recession. For instance, 78% of Germans believe their national economy is in good shape, compared with just 28% in 2009.

However, in many advanced economies positive assessments of current economic conditions do not translate into optimism for the future. Only 36% of Germans think that when children in their country grow up they will be financially better off than their parents. Similarly, while nearly two-thirds of Americans say economic conditions are good, only one-in-three are optimistic about the next generation’s financial prospects.

And in many nations, people are dissatisfied with the current state of their economy as well. This is certainly true in G20 host Argentina, where President Mauricio Macri has had to seek help from the International Monetary Fund and implement austerity measures in response to a sharp recession. Just 17% of Argentines say the economy is in good shape. In neighboring Brazil, which just elected the former military officer Jair Bolsonaro as president, only 9% give their economy positive marks.

2Global publics like the idea of trade in principle, but they have reservations about its benefits. With the U.S. and China, the world’s two largest economies, engaged in a major trade dispute, trade will likely play a feature role at the summit. Our polling has found that people around the world are conflicted about trade. Across 27 nations polled this year – many of them G20 member countries – a median of 85% said that growing trade and business ties with other countries is a good thing. Support for trade is lowest, however, in the G20’s host nation: Just over half of Argentines (54%) say it is good for their country. In Japan, next year’s summit host and the world’s third largest economy, about seven-in-ten (72%) say trade is good for the country. 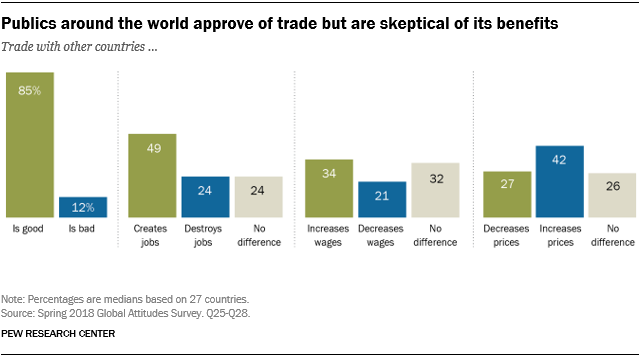 Despite the general belief that trade is good for the economy, there is substantial skepticism regarding its impact on jobs, wages and prices. About half (a median of 49%) say trade creates jobs, roughly one-in-three (34%) believe it increases wages, and only about one-in-four (27%) think it decreases prices.

3In advanced and emerging economies alike, people are worried about automation. Argentina has made the future of work a priority for this round of the G20, along with infrastructure, sustainable food and a perspective on gender. As our 2018 poll found, people in nations across the globe have strong concerns about the future workplace. In all 10 advanced and emerging economies where the question was asked, large majorities said that in the next 50 years robots and computers will probably or definitely do much of the work currently done by humans. 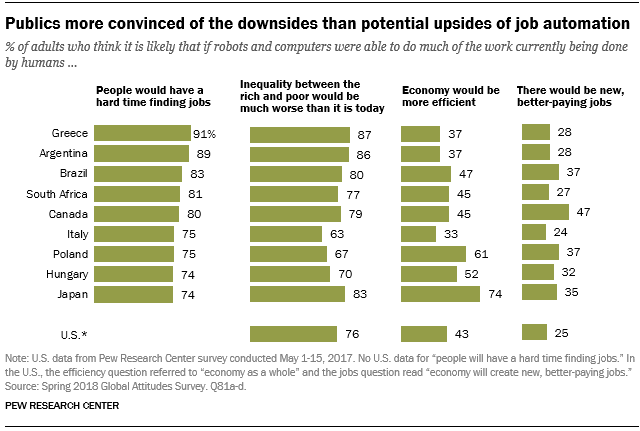 And most believe that increasing automation will have negative consequences for jobs. Large majorities think automation will make it difficult for ordinary people to find a job and will deepen economic inequality. Relatively few predict the economy will become more efficient or that new, better-paying jobs will be created by technological advances. 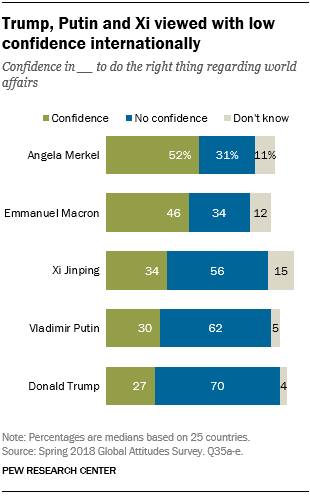 4Putin, Xi and especially Trump are unpopular globally. More than 30 world leaders are expected to attend the summit. Of the five leaders evaluated in the spring survey – all of whom are scheduled to appear – President Donald Trump receives the lowest ratings. A median of 70% across 25 countries say they do not have confidence in the U.S. leader to do the right thing regarding world affairs.

Vladimir Putin and Xi Jinping also receive negative reviews – a median of 62% lack confidence in Putin while 56% say this about Xi. German Chancellor Angela Merkel receives the highest rating: A median of 52% are confident in her ability to handle world affairs, while 46% are confident in French President Emmanuel Macron.