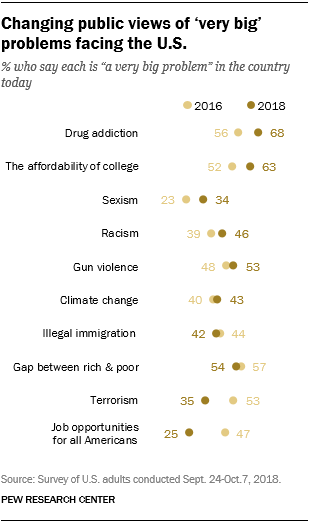 In the nearly two years since the 2016 presidential election, Americans’ views of the seriousness of several national problems have changed, with concerns about drug addiction, college affordability, sexism and racism on the rise.

The share of U.S. adults saying drug addiction is a “very big” problem in the country has increased 12 percentage points since a survey conducted shortly before the November 2016 election, from 56% then to 68% today.

Increasing shares of Americans cite the affordability of a college education (up 11 percentage points) and sexism (also up 11 points) as “very big” problems in the country. The share who say racism is a very big problem has risen 7 points, while the share citing gun violence is up 5 points.

Drug addiction ranks near the top of the list of 18 national problems included in a new Pew Research Center survey conducted Sept. 24 to Oct. 7, along with the affordability of health care (70% say it is a very big problem) and ethics in government (67%).

The shares of Americans citing two issues – terrorism and job opportunities – as major national problems have declined in the past two years. About a third (35%) say terrorism is a very big problem, down 18 points from two years ago. And, with the unemployment rate at its lowest point since 1969, the share saying “job opportunities for all Americans” is a very big problem has declined 22 points – from 47% in 2016 to 25% today.

Job opportunities now ranks lowest among the 18 national problems in the survey. Among other economic issues, far more cite the affordability of college (63%), the federal budget deficit (55%), the gap between rich and poor (54%) and wages and the cost of living (52%) as very big problems.

The new survey also examined how voters in the midterm elections assess these problems. It found large partisan differences over the seriousness of most of them – especially the fairness of the criminal justice system, climate change and illegal immigration. 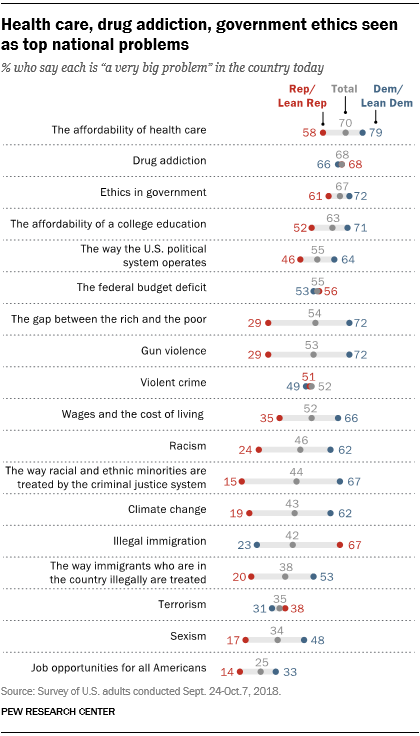 By contrast, nearly identical shares in each party (68% of Republicans and 66% of Democrats) say drug addiction is a very big problem facing the country. Violent crime is also among the handful of other items on which there are no significant partisan differences (51% of Republicans and 49% of Democrats say it is a very big problem). The survey question asks whether each issue is a very big, moderately big or small problem – or if it is not a problem at all. While majorities say all 18 issues are at least moderately big problems, there is considerable variance in the shares saying each is a “very big” problem.

The share of Republicans who cite job opportunities for all Americans as a major national problem has plummeted since 2016 – from 53% then to 14% today. On a separate survey question asked by the Center, the share of Republicans who rate national economic conditions as excellent or good has more than quadrupled in recent years – from 15% in June 2016 (before the presidential election) to 73% last month. 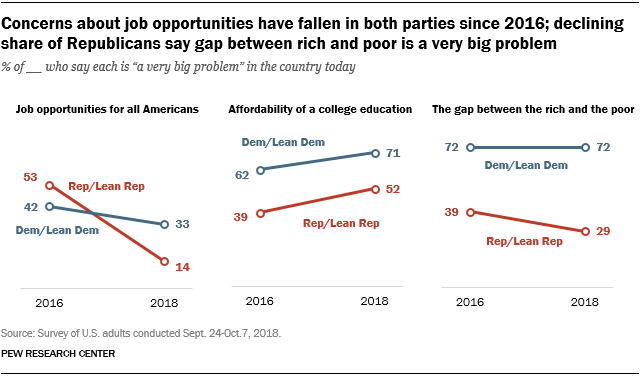 Democrats’ opinions about job opportunities and the state of the U.S. economy have changed far less. Currently, 33% of Democrats cite job opportunities for all Americans as a very big national problem, a modest decline from 2016 (42%).

Republicans also are less likely to view the gap between rich and poor as a very big national problem than two years ago, while Democrats’ views are unchanged. However, there have been increases in both parties in the shares viewing college affordability as a major problem, though a larger share of Democrats than Republicans say this is a very big problem (71% vs. 52%).

Terrorism has declined a major national problem among members of both parties, especially Republicans. Republicans are nearly 30 points less likely to view terrorism as a very big problem than two years ago (38% now, 66% then). There has been a smaller decline in the share of Democrats saying this (31% now, 42% then).