As the surge in immigration to Europe drops back to pre-2015 levels, the fever pitch of concern has also abated across eight key countries in Western Europe, according to surveys conducted by the European Union’s Eurobarometer between 2014 and 2018. Today, a median of 23% in these countries name immigration as one of the top two problems facing their country, down from a median of almost half in November 2015. 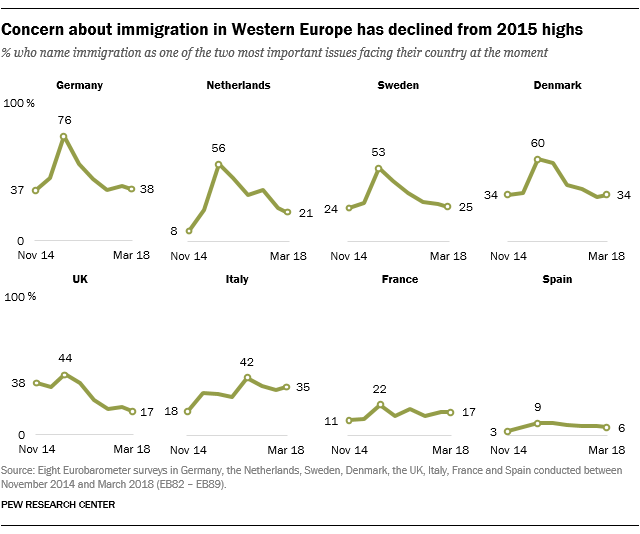 But while anxieties have decreased dramatically across the EU as immigration flows have slowed, immigration still remains a top concern for many Western Europeans. For example, in both Denmark and Germany, more people name the issue as a problem facing their country than any other (34% and 38%, respectively). And while only a minority of people are concerned in most countries, they do tend to be vocal. Immigration issues, often raised by far-right parties, have rocked coalitions in Germany, and been front and center in recent elections in Italy and Sweden. 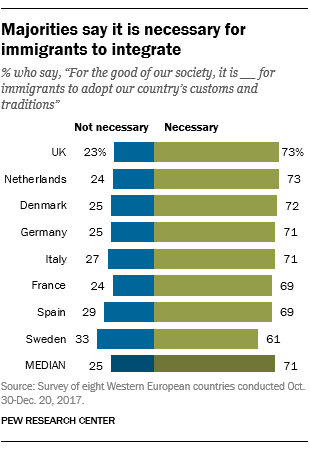 A major concern about immigration among people in the countries surveyed is whether immigrants will make the effort to integrate into their new country. In a late 2017 Pew Research Center survey, majorities in all countries agreed that, for the good of their society, immigrants should adopt the country’s customs and traditions.

When it comes to which aspects of a country’s customs and traditions are most important for immigrants to adopt, past Pew Research Center surveys have found that most Western Europeans think speaking the country’s language and respecting the country’s institutions and laws are very important to truly share the national identity of a country. But sizable minorities also think it’s important to have been born in the country or to be a Christian. 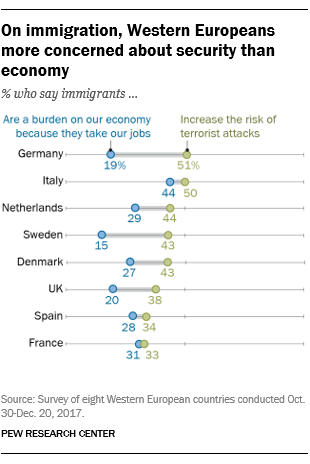 Ideology plays a large role in determining many of these attitudes. People on the ideological right are more likely than those on the left to say immigrants need to integrate into a country’s society, that they increase the risk of terrorism, and that they are an economic burden. Beyond ideology, education level also affects attitudes. People with lower levels of education are significantly more likely to see the negative sides of immigration. In Italy, for example, around half of those with a secondary degree or less (48%) say immigrants are a burden on the economy, compared with 24% of those with more than a secondary degree. 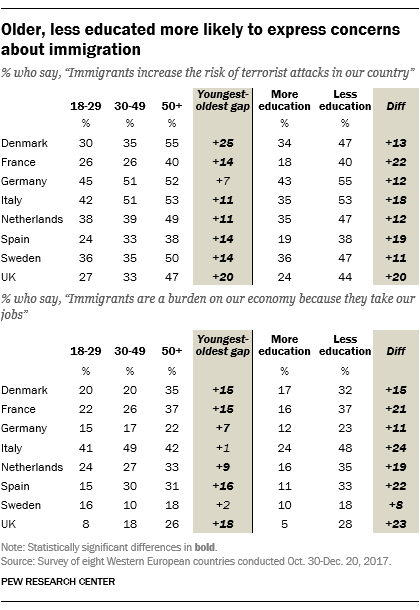 Age is also a key factor, with older people much more likely to see immigrants in a negative light. For example, in the United Kingdom, around half of those ages 50 and older say immigrants increase the risk of terrorism, compared with only around a quarter of those under 30.

Similarly, there are few differences between men and women when it comes to the importance of cultural integration. But, in five countries — the Netherlands, Denmark, Germany, Sweden and the UK — men are more likely than women to think that immigrants increase the risk of terrorist attacks.