While highly ideological members of Congress tend to use their Facebook posts to criticize political opponents and support their allies, moderate lawmakers are more likely to concentrate on local issues in their outreach on the platform, according to a new Pew Research Center analysis covering Jan. 1, 2015, to Dec. 31, 2017. 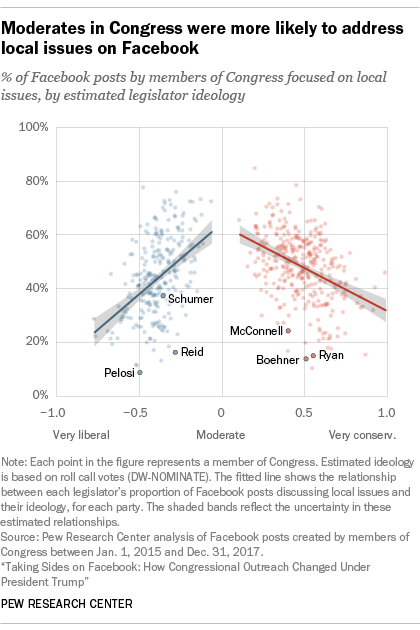 For the average moderate legislator – that is, those in the middle 20% of all members based on the DW-NOMINATE ideology measure – about 54% of a member’s Facebook posts discussed places, groups, individuals or events in the politician’s state or district. But for the average very liberal or very conservative legislator (that is, among the 10% most liberal or 10% most conservative members by the same measure), just 38% of posts dealt with local issues. Instead, those very liberal and very conservative members were especially likely to express opposition toward their political adversaries and support for other members of their own party.

Posts about local issues tended to receive less online engagement compared with posts that expressed political support or opposition. The median post that discussed local issues received 39 likes, four comments and three shares. By contrast, the median post that supported or opposed other political actors and groups received 98 likes, 22 comments and 14 shares. This pattern remains consistent when using more complex statistical tests that control for each member’s number of Facebook followers and ideological position. (While local issues might be less likely to prompt engagement at a national level, this analysis did not examine whether or not those who engaged with posts lived within members’ states or districts.)

Party leaders were especially unlikely to use Facebook to communicate about subjects related to their home states and districts. For the average Senate and House majority and minority leader across the 114th and 115th Congress, just 19% of posts discussed local issues. House Minority Leader Nancy Pelosi discussed local issues in just 9% of her Facebook posts, while House Speaker Paul Ryan did so in 15% of his posts. By contrast, the average non-leader’s posts talked about local issues and events 47% of the time.

There was also a gap between the two chambers when it came to discussing local topics: The average senator did so in 41% of posts, compared with 47% for the average House representative. And newer members tended to post about their own states and districts more often than those with a longer tenure in Congress. The average member who had served two terms or less mentioned local topics in 49% of posts, compared with a rate of 44% for members who had served four or more terms.

Very liberal or conservative legislators most likely to share news on Facebook
Highly ideological members of Congress have more Facebook followers than moderates do
After Las Vegas attack, Democrats in Congress were far more likely than Republicans to mention guns on Facebook
Americans at the ends of the ideological spectrum are the most active in national politics
Outside U.S., Floyd’s killing and protests sparked discussion on legislators’ Twitter accounts