The Rev. Billy Graham, who recently died at age 99, was one of the most influential and important evangelical Christian leaders of the 20th century. From humble beginnings in rural North Carolina, Graham went on to become a world famous evangelist who drew huge crowds while, at the same time, developing close relationships with several U.S. presidents.

Graham is probably best known for the nearly six decades he spent traveling the world, preaching and evangelizing to millions in his stadium crusades. Graham also cofounded Christianity Today magazine, which remains an important chronicle of evangelical life and culture. Finally, Graham will be remembered as the “pastor to presidents;” he befriended and advised presidents from both parties, including Dwight Eisenhower, Lyndon Johnson, Richard Nixon and Bill Clinton.

As the country remembers Graham, here are five facts about American evangelical Protestants. 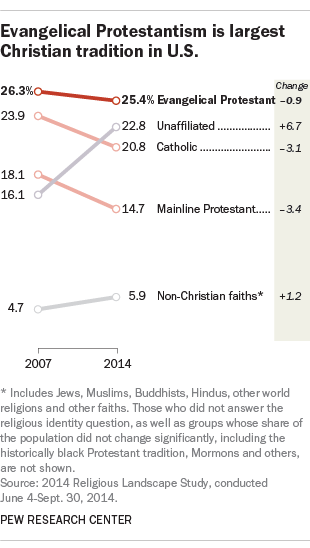 4On average, evangelical Protestants have somewhat lower levels of educational attainment, compared with the U.S. public as a whole. Roughly one-in-five evangelical Protestants (21%) are college graduates, while 35% have some college education (but not a four-year degree), and 43% have a high school education or less. Among those in the overall public, 27% are college graduates, 32% have some college experience, and 41% have a high school diploma or less education.