The issue of gun policy returned to the political front burner following the Oct. 1 mass shooting in Las Vegas. And in the week after the attack, partisan differences were on full display in how elected officials responded on Facebook: Among Democratic members of Congress who posted about the attack, 63% mentioned guns, compared with only 2% of congressional Republicans, according to a Pew Research Center analysis.

Republicans also were somewhat less likely than Democrats to post about the attack in general: 66% of GOP members with Facebook pages did so between the day of the attack and Oct. 9, compared with 84% of Democrats. (Oct. 9 was chosen as the cutoff date to gauge lawmakers’ early reactions to the shooting.) 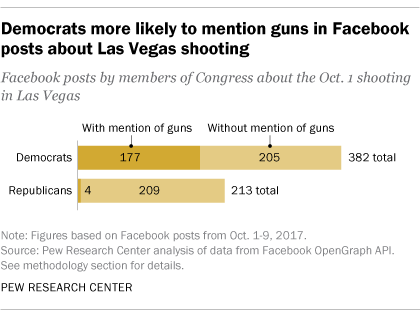 In all, 373 out of 503 voting members of Congress who have official Facebook pages posted about the attack at least once during the period studied. The analysis only examined Facebook posts that included text written from a member’s account; posts with only an image, for instance, were excluded.

In addition to tallying the number of posts by lawmakers in each party, the Center’s analysis determined whether each post that discussed guns expressed support for stricter gun policies, opposed stricter policies or did not take a position, based on the language of the post. For instance, one post that was counted as opposing stricter gun policies stated that “no amount of gun control will stop a barbarian,” while a post coded as supporting stricter gun policies referred to a perceived lack of “common-sense reforms to protect human life.”

Of the 181 posts about Las Vegas that discussed guns, 98% were posted by Democratic lawmakers and 96% advocated stricter gun policies. Because Democrats favoring stricter gun policies were most likely to mention guns overall, only 1% of all posts – two posts total – were against such policies. 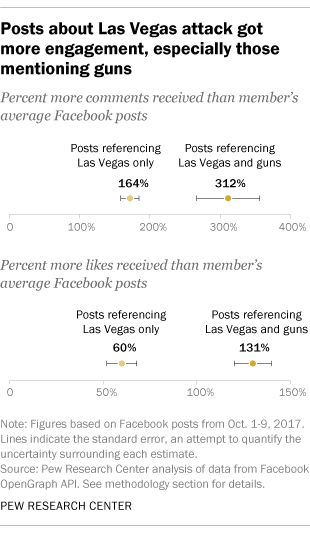 Members’ posts also generated more engagement – such as “likes” and comments – from Facebook users when they mentioned both guns and the Las Vegas attack, as opposed to just the attack. Posts mentioning both drew an average of 131% more likes and 312% more comments when compared with the number of likes and comments each member normally gets for a post. Posts about the attack with no reference to guns, by comparison, drew 60% more likes and 164% more comments, on average, than the average number of likes and comments a post by that member normally receives. 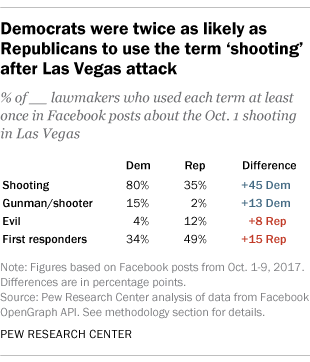 Republicans were also more likely to describe the attacker or his intentions as “evil” – 12% of them used this term (22 members total), compared with 4% of Democrats (8 total). Democrats, however, were more likely to use the term “gunman” or “shooter,” with 15% doing so (30 total), versus 2% of Republicans (4 total). While these percentages might seem low in the context of other findings, they are noteworthy for word frequencies, because rather than choosing from a limited number of answers – as with a survey question – legislators could draw on their entire vocabularies for their statements. As a result, it is notable that even a small share of legislators used identical words.

Facebook is often used as a way for legislators to connect with their core supporters, but it’s important to note that legislators who do not discuss gun policy on the platform still may do so on other platforms – or may ultimately take positions on gun-related measures without addressing them on Facebook.

A June report by Pew Research Center highlighted Americans’ complex relationship with guns. The survey found that nearly three-quarters of U.S. gun owners (74%) say the right to own a gun is essential to their own sense of freedom. At the same time, substantial majorities of Americans support proposals to limit access to firearms, such as requiring background checks for guns purchased privately and at gun shows.

Note: The methodology behind this analysis can be found here (PDF). This post was updated on Oct. 20, 2017, to clarify that there were 181 Facebook posts that mentioned both the Las Vegas shooting and guns during the period examined. In addition, the chart “Democrats more likely to mention guns in Facebook posts about Las Vegas shooting” was updated to more accurately depict figures shown.