The U.S. Asian population is diverse. A record 20 million Asian Americans trace their roots to more than 20 countries in East and Southeast Asia and the Indian subcontinent, each with unique histories, cultures, languages and other characteristics.

The 19 largest origin groups together account for 94% of the total Asian population in the U.S. New fact sheets for each of these Asian origin groups accompany this blog post. Each describes key demographic and economic characteristics of each group.

Here are some key findings about the nation’s Asian-origin population: 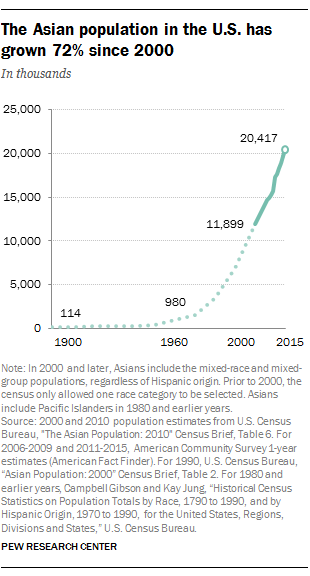 The U.S. Asian population grew 72% between 2000 and 2015 (from 11.9 million to 20.4 million), the fastest growth rate of any major racial or ethnic group. By comparison, the population of the second-fastest growing group, Hispanics, increased 60% during the same period.

Population growth varied across the 19 Asian origin groups in this analysis. Roughly half of the 19 groups more than doubled in size between 2000 and 2015, with Bhutanese-, Nepalese– and Burmese-origin populations showing the fastest growth over the period. Meanwhile, Laotians and Japanese had among the slowest growth rates among U.S. Asians in the past 15 years.

No single country-of-origin group dominates the U.S. Asian population, but the largest groups are of Chinese, Indian and Filipino origin. As of 2015, 24% of Asian Americans (4.9 million) were of Chinese origin, the largest single origin group. The next two largest origin groups are Indian-origin Asians, who accounted for 20% of the national Asian population (4.0 million), and Filipinos (19%, or 3.9 million). Those with roots in Vietnam, Korea and Japan easily clear the 1 million mark as well. The remaining 13 groups in this analysis account for just 12% of all U.S. Asians.

The modern immigration wave from Asia has accounted for one-quarter of all immigrants who have arrived in the U.S. since 1965. Today 59% of the U.S. Asian population was born in another country. That share rises to 73% among adult Asians. Yet, when and how Asian immigrants arrived in the U.S. varies, which helps explain why some groups have greater shares of U.S. born or foreign born among their populations. For example, only 27% of Japanese, who began arriving in the 19th century as plantation workers in what is now the state of Hawaii, are immigrants. By contrast, many Bhutanese arrived recently as refugees, and nearly all (92%) are foreign born.

Bhutanese (92%) and Nepalese (88%) have the highest foreign-born shares, followed by Burmese (85%), Malaysians (83%) and Sri Lankans (78%). At the other end of the spectrum, Hmong (39%) and Japanese (27%) have the lowest share of foreign born among U.S. Asians. More Asian immigrants have arrived in the U.S. than Hispanic immigrants each year since 2010. They include new arrivals from China and India, two of the top three countries of origin (along with Mexico), with many looking to study, work or reunite with family. Other Asian immigrants have come to the U.S. as refugees; many arrived at the end of the Vietnam War, and others from Bhutan and Burma came more recently.

The U.S. Asian population overall does well on measures of economic well-being compared with the U.S. population as a whole, but this varies widely among Asian subgroups. The median annual household income of households headed by Asian Americans is $73,060, compared with $53,600 among all U.S. households. But these overall figures hide differences among Asian origin groups. Four groups have household incomes well below the median household income for all Americans: Bangladeshi ($49,800), Hmong ($48,000), Nepalese ($43,500) and Burmese ($36,000). By contrast, Indian households have the highest median income ($100,000), followed by Filipinos ($80,000), Japanese and Sri Lankans (each $74,000).

Asian-Americans Lead All Others in Household Income
Key facts about Asian origin groups in the U.S.
Asian Americans are the fastest-growing racial or ethnic group in the U.S. electorate
How the U.S. Hispanic population is changing
Asian American voter turnout lags behind other groups; some non-voters say they're ‘too busy’
Defining generations: Where Millennials end and Generation Z begins
Quiz: Are you a Core Conservative? A Solid Liberal? Or somewhere in between?
Teens, Social Media & Technology
How the Coronavirus Outbreak Has – and Hasn’t – Changed the Way Americans Work
What We Know About Gen Z So Far