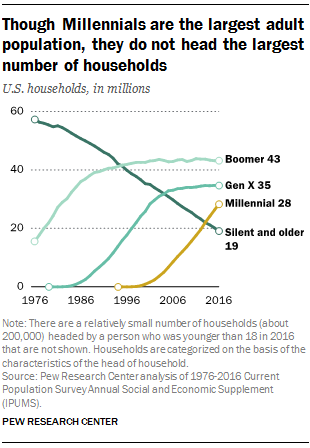 Millennials are the largest living generation by population size (79.8 million in 2016), but they trail Baby Boomers and Generation Xers when it comes to the number of households they head. Many Millennials still live under their parents’ roof or are in a college dorm or some other shared living situation. As of 2016, Millennials (ages 18 to 35 in 2016) headed only 28 million households, many fewer than were headed by Generation X (ages 36 to 51 in 2016) or Baby Boomers (ages 52 to 70).

Even so, the latest available Census Bureau data indicate that Millennial-run households represent the largest group in some key categories, such as the number of households living in poverty.

Looking at households is important because many economic and spending decisions, such as whether to own or rent a home, tend to revolve around the household rather than the individual adult. Here are five facts about Millennial households: 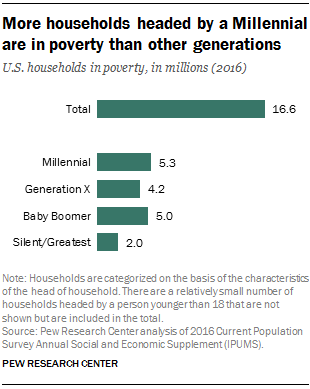 2Millennial households dominate the ranks of the nation’s renters. Last year, Millennials headed 18.4 million of the estimated 45.9 million households that rent their home. By comparison, only 12.9 million Generation X and 10.4 million Boomer households were renters. Among households headed by a member of the Silent or Greatest generation, 4.1 million were renters.

Millennials’ prominence among renters reflects more than their youth. They are also significantly less likely to own their home than prior generations of young adults when they were the same age. For example, in 1982, 41% of households headed by those younger than 35 (the approximate age of Boomers at the time) owned their homes. In 1999, 40% of households in this younger age bracket (then Gen Xers) owned their dwelling. By 2016, the share had dropped to 35%. The Great Recession did lead to a widespread increase in renting across households of all ages, but homeownership declined most among younger households. 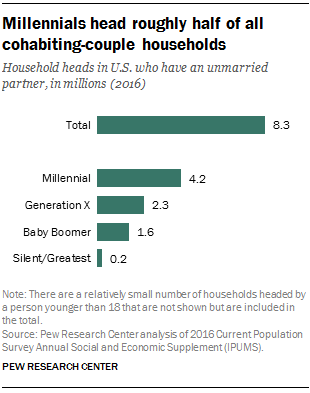 About half of cohabiting-couple households are headed by a Millennial. Since 2011, Millennials have headed more households made up of unmarried partners than any other adult generation. By 2016, Millennials were heads of 4.2 million of an estimated 8.3 million cohabiting-couple households. The greater prevalence of cohabitation among Millennial households partly reflects that Millennials are more likely to live with a romantic partner than earlier generations of young adults. For example, in 2012, among women ages 25 to 29 who were living with a spouse or partner, 37% were cohabiting. By comparison, in 1987 – when Boomers were at a comparable age to Millennials – just 10% of 25- to 29-year-old women in a union were cohabiting. 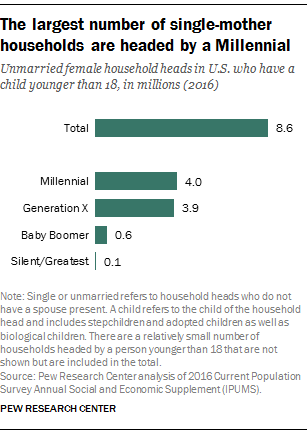 In 2016, Millennials for the first time surpassed all other generations in number of household heads who were single mothers. Last year, 8.6 million households were headed by a single mother who lived with a child younger than 18. About 4 million of these mothers were Millennials, slightly outnumbering the 3.9 million Gen Xers heading single-mother households. Baby Boomers who were single mothers with young children and heading a household numbered only 0.6 million. The incidence of single parenthood has increased markedly since 1980. That year, 19% of children lived in a single-parent family; by 2014, 34% did.

5Among heads of household, Millennials in 2016 became the generation with the largest number identifying as multiracial. Multiracial Americans are among the nation’s youngest racial and ethnic populations, with a median age of only 19 as of 2015. Many of them have yet to form households, but among those who have, Millennials are now the most prevalent. Around 630,000 multiracial Millennials headed a household in 2016, compared with about 540,000 multiracial Gen Xers and a similar number of multiracial Boomers.

Americans are moving at historically low rates, in part because Millennials are staying put