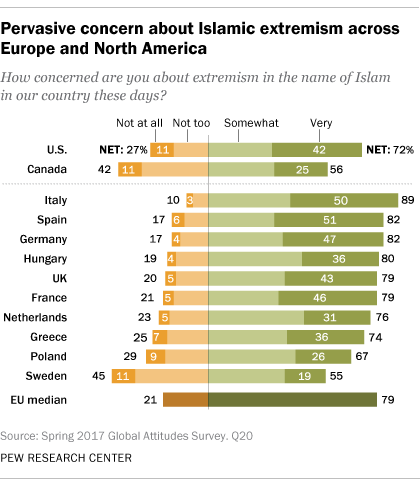 Even before this week’s terrorist bombing at a pop concert in Manchester, England, people across Europe and in the U.S. and Canada had pervasive concerns about the threat of extremism in their countries. Across 12 countries surveyed from February through April by Pew Research Center, majorities said they were at least somewhat concerned about extremism in the name of Islam in their countries, including 79% who said this in the UK itself. And across the 10 EU countries surveyed, a median of 79% were concerned about Islamic extremism, while only 21% were not concerned.

The issue of extremism across Europe has manifested itself in myriad ways in recent years, including significant and deadly terrorist attacks in Paris, Brussels, Berlin and now Manchester, all claimed by the Islamic State (ISIS), which is based in Iraq and Syria. And while individual terrorist incidents tend to increase fears about extremism, there has been great concern globally about the issue throughout the last decade.

Fears about extremism, while pervasive across all demographic groups, are particularly acute among older people and those who consider themselves on the right of the ideological spectrum. For example, in the UK, 87% of those ages 50 and older are concerned about extremism in the name of Islam, compared with 61% among Brits ages 18 to 29. Similarly significant age gaps exist in nine of the 12 countries surveyed.

When it comes to ideology, there are significant gaps between those on the right and left in 10 of the 12 countries surveyed. In Canada, for instance, 66% of those who place themselves on the right politically say they are concerned about extremism, compared with only 30% on the left. 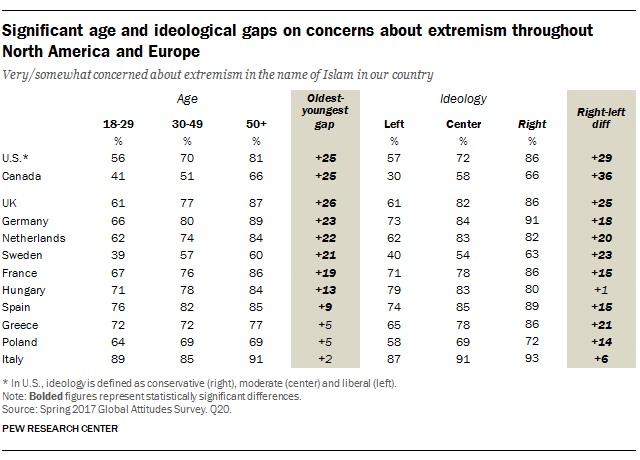 Correction: The data in this blog post and the accompanying graphics and topline were corrected to reflect a revised weight for Greece and Italy data (June 28, 2017) and corrected demographic data for Canada (July 7, 2017). The changes due to these adjustments are very minor and do not materially change the analysis of the blog post.