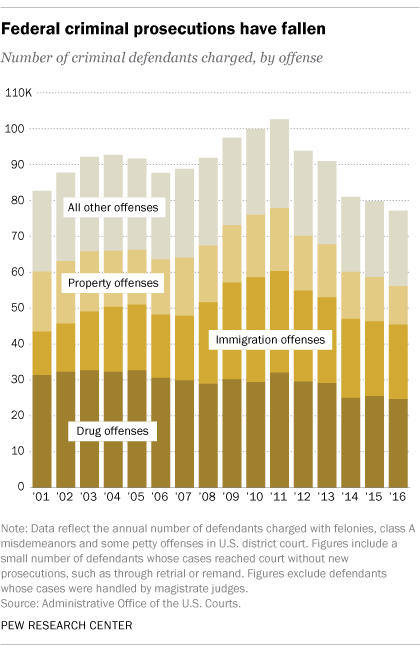 After peaking in 2011, the number of federal criminal prosecutions has declined for five consecutive years and is now at its lowest level in nearly two decades, according to a Pew Research Center analysis of new data from the federal court system. The decline comes as Attorney General Jeff Sessions has indicated that the Justice Department will reverse the trend and ramp up criminal prosecutions in the years ahead.

Federal prosecutors filed criminal charges against 77,152 defendants in fiscal year 2016, according to the Administrative Office of the U.S. Courts. That’s a decline of 25% since fiscal 2011, when 102,617 defendants were charged, and marks the lowest yearly total since 1997. The data count all defendants charged in U.S. district courts with felonies and serious misdemeanors, as well as some defendants charged with petty offenses. They exclude defendants whose cases were handled by magistrate judges.

Prosecutions for drug, immigration and property offenses – the three most common categories of crime charged by the federal government – all have declined over the past five years. The Justice Department filed drug charges against 24,638 defendants in 2016, down 23% from 2011. It filed immigration charges against 20,762 defendants, down 26%. And it charged 10,712 people with property offenses such as fraud and embezzlement, a 39% decline.

However, prosecutions for other, less frequently charged crime types have increased slightly. For example, prosecutors charged 8,576 defendants with gun crimes in 2016, a 3% increase over 2011 (and a 9% single-year increase over 2015). And they charged 2,897 people with violent crimes such as murder, robbery and assault, a 4% increase from five years earlier.

Several factors may play a role in the decline in federal prosecutions in recent years. One notable shift came in 2013, when then-Attorney General Eric Holder directed federal prosecutors to ensure that each case they bring “serves a substantial federal interest.” In a speech announcing the policy change, Holder said prosecutors “cannot – and should not – bring every case or charge every defendant who stands accused of violating federal law.”

Sessions, who took office as attorney general in February, has indicated that the Justice Department will take a different approach under his leadership. In particular, he has pushed to increase prosecutions for drug- and gun-related offenses as part of a broader plan to reduce violent crime, which rose nationally in 2015 and in the first half of 2016, according to the FBI. (Despite these increases, violent crime remains far below the levels recorded in the 1990s.)

Traditionally, the federal government has played a relatively small role in prosecuting violent crime, which is more commonly handled by states and localities. This distinction is evident in the different compositions of the federal and state prison populations: While 53% of all sentenced state prisoners are serving time for violent crimes, the same is true for just 7% of sentenced federal inmates, according to the most recent data from the Bureau of Justice Statistics. In absolute numbers, that works out to about 700,000 state prisoners serving time for violent crimes, compared with only about 14,000 federal prisoners incarcerated for violent offenses. 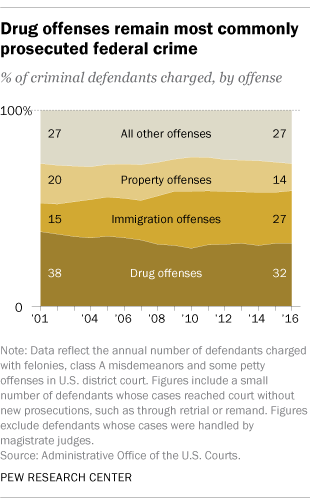 Since 2001, the Justice Department’s prosecution priorities have changed. Immigration offenses, for instance, comprised just 15% of all prosecutions in 2001; by 2016, they accounted for 27%. During the same period, drug crimes fell from 38% to 32% of all prosecutions, while property crimes declined from 20% to 14%.

Such revisions by the Justice Department are not unusual. In 2013, for example, after two states legalized the recreational use of marijuana, the department announced new charging priorities for offenses involving the drug, which remains illegal under federal law. Federal marijuana prosecutions fell to 5,158 in 2016, down 39% from five years earlier.

To avoid double-counting defendants who may be charged with more than one type of crime, the data published by the Administrative Office of the U.S. Courts count defendants by their most serious offense. A defendant charged with a gun crime and a drug crime, for example, is counted under the more serious of the two offenses, as determined by the maximum potential sentence for each crime.