The Affordable Care Act has drawn mixed reviews from the U.S. public since it became law in 2010, and a new Pew Research Center survey finds that Americans remain split in their opinions about the law and its future. But while President-elect Donald Trump has vowed to repeal the health care law, individual provisions are broadly popular, even across partisan lines. 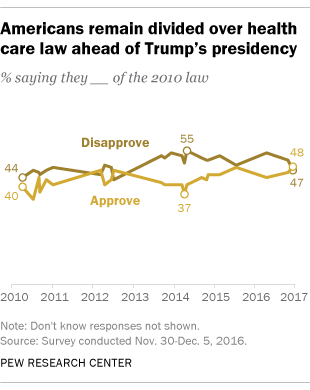 Overall, Americans are evenly divided in their views of the ACA: 48% approve of it while 47% disapprove, according to the survey, conducted Nov. 30 to Dec. 5. Views of the law remain largely divided by party, as they have been since 2009, even before the law was enacted. Today about three-quarters (73%) of Democrats approve of the law, while 85% of Republicans disapprove. Independents are roughly as likely to approve (52%) as disapprove (45%), though independent views of the law have grown more positive in the wake of the election. 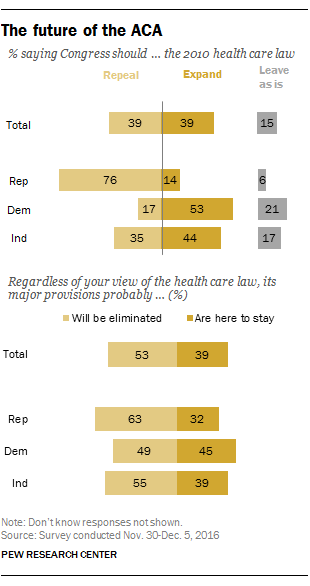 Trump repeatedly criticized the health care law throughout his presidential campaign, vowing to repeal what he called “terrible legislation” and replace it (though he has more recently kept the door open to retaining several provisions). And his recent selection of Rep. Tom Price, an outspoken ACA opponent, as his secretary of health and human services suggests Trump intends to follow through on his pledge. 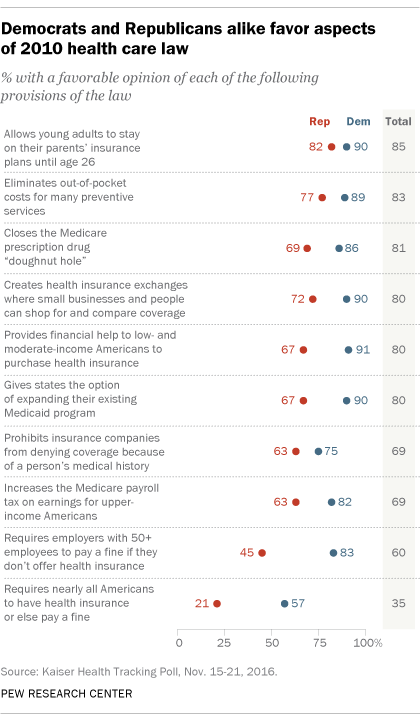 Yet a new Kaiser Family Foundation survey shows that Americans are supportive of several specific provisions of the law, despite their broader ambivalence.

But partisans are more divided over some of the law’s other provisions. In particular, Republicans have far less favorable views than Democrats of the fines the law imposes for not meeting specific requirements. For example, while 83% of Democrats have a favorable opinion of requiring employers with 50 or more employees to provide health insurance or risk a fine, that compares with just 45% of Republicans. A similar partisan gap is evident over the least popular provision of the ACA, its requirement that nearly all Americans should have health insurance or risk being fined: 57% of Democrats have a favorable opinion of this, compared with 30% of independents and just 21% of Republicans.