Politics on social media – as in real life – isn’t always pretty. In an election season marked by partisan animosity, a recent Pew Research Center report found that many social media users describe their political encounters online as stressful and frustrating, and nearly four-in-ten have taken steps to block or minimize the political content they see from other users.

But despite the downsides, exposure to the range of new ideas and viewpoints that many social media users encounter can occasionally cause people to change their minds about political issues or candidates. 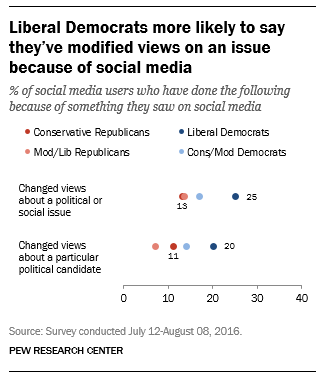 In addition to asking whether they had changed their minds in this way due to social media content, our survey also asked respondents to tell us – in their own words – about a recent time this happened to them. And when we coded their answers, we found a number of distinct themes that emerged in the issues that came to mind. 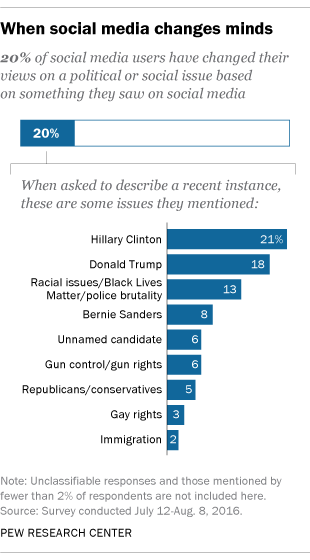 Many of the responses we received in this survey, conducted this summer, mentioned one of the major presidential candidates as the “political or social issue” they changed their minds on. Around one-in-five users mentioned either Hillary Clinton (21%) or Donald Trump (18%), and around one-in-ten referenced Bernie Sanders:

“I saw a video on Reddit … that ultimately swayed me from voting independent in this election to voting for Hillary Clinton.”

“I thought Donald Trump was leaning one way on an issue and a friend posted something that was opposite of what I believe. This caused me to think less of him than I once I did.”

“Originally, I planned on voting for Hillary Clinton in the election, but then I found out about Bernie Sanders through social media. I decided I would vote for him instead.”

But while many of the responses we received keyed into the current election, other topics also came to the forefront – most notably issues related to race and the Black Lives Matter movement, whose hashtag is frequently used on social media. Roughly one-in-ten (13%) users who have changed their minds about a “political or social issue” mentioned race, police brutality or the Black Lives Matter movement in one way or another:

“Black lives matter vs. All lives matter: I’m white. Initially, I saw nothing wrong with saying ‘All lives matter’ – because all lives do matter. Through social media I’ve seen many explanations of why that statement is actually dismissive of the current problem of black lives seeming to matter less than others and my views have changed.”

“My view on the police has dramatically changed after being faced with case after case of police violence especially against communities of color.”

Along with these issues, a relatively small share of users mentioned issues such as gun control and gun rights, gay rights and immigration:

“More pro-gun laws now due to statistics presented in specialized social media presentations of gun laws elsewhere in the world and their effect on public violence.”

“I would say that I’m for a harder approach on immigration after reading social media.”

“From information I have seen on Facebook I learned more about some of the pitfalls of some of the candidates, which makes me lean towards voting for an independent party.”

“A post from a friend made me reconsider the positives of conservatives.”

14% of Americans have changed their mind about an issue because of something they saw on social media
Activism on social media varies by race and ethnicity, age, political party
Misinformation and fears about its impact are pervasive in 11 emerging economies
Liberal Democrats more likely than other groups to be politically active on social media
Americans’ complicated feelings about social media in an era of privacy concerns
The 2020 Trump-Biden matchup
Defining generations: Where Millennials end and Generation Z begins
Voters Are Highly Engaged, but Nearly Half Expect To Have Difficulties Voting
About One-in-Four U.S. Hispanics Have Heard of Latinx, but Just 3% Use It
An examination of the 2016 electorate, based on validated voters