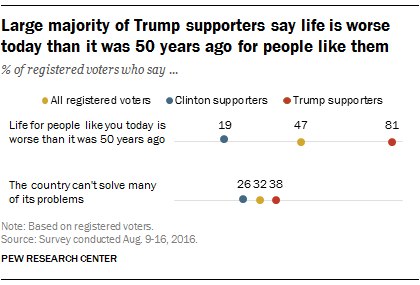 Voters who support Hillary Clinton and Donald Trump agree on at least one thing – that they not only differ on plans and policies, but also on “basic facts.”  Their disagreements on issues extend to the nation’s progress and its ability to solve problems. 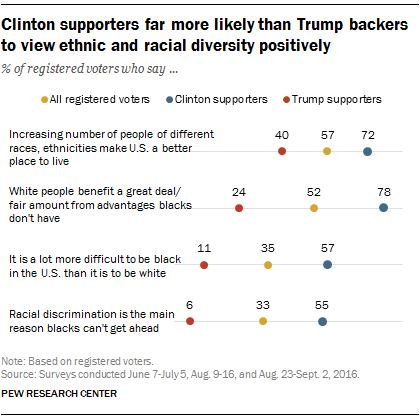 Clinton supporters were much more likely than Trump supporters to feel positively about the country’s increasing diversity, however. Nearly three-quarters (72%) of those who backed Clinton said the increasing number of people of different races, ethnic groups and nationalities makes the U.S. a better place to live. Fewer than half of Trump supporters (40%) agreed. 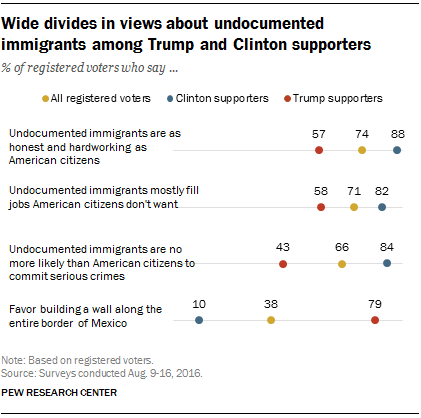 Immigration has been a central issue in this campaign, and in August, Clinton and Trump supporters expressed differing views on both immigration policies and undocumented immigrants.

And Trump supporters were nearly eight times as likely as Clinton supporters (79% vs. 10%) to favor building a wall along the entire U.S. border with Mexico. 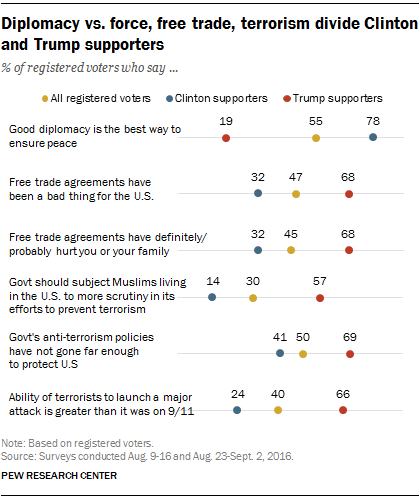 Disagreements also exist on foreign policy issues such as free trade and terrorism.

And when it comes to efforts to prevent terrorism, a majority (57%) of Trump supporters said the government should subject Muslims living in the U.S. to additional scrutiny, while just 14% of Clinton supporters agreed.

In early September, most Trump supporters (69%) said their greater concern with anti-terrorism policies was that they have not gone far enough to protect the country (just 18% said they have gone too far in restricting civil liberties). Fewer than half (41%) of Clinton supporters said their greater concern was that policies have not gone far enough in protecting the country. And Trump supporters (66%) were far more likely than Clinton supporters (24%) to say that the ability of terrorists to launch a major attack today is greater than it was at the time of the Sept. 11 attacks.

Supporters of each candidate also disagree about the size and scope of the federal government. 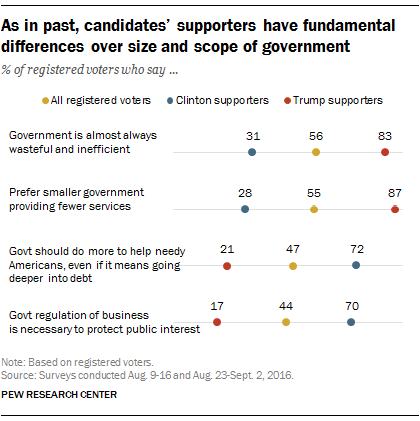 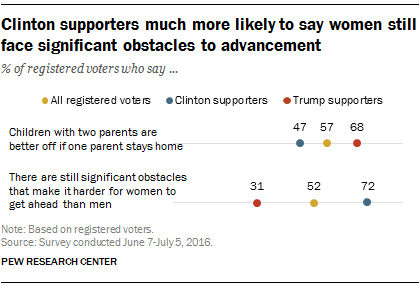 In July, there were substantial divides between the supporters of each candidate regarding gender issues. More than twice as many Clinton supporters (72%) than Trump supporters (31%) said that there are still significant obstacles that make it harder for women than men to get ahead.

These differences in opinion also extend to views of parenting. A greater share of Trump supporters (68%) than Clinton supporters (47%) said that children with two parents are better off when a parent stays home to focus on the family.