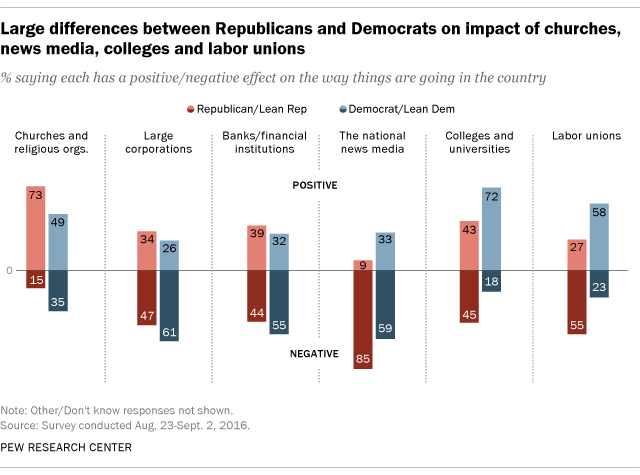 At a time of growing partisan polarization, Republicans and Democrats are deeply divided in their views of many issues and the opposing party. These differences extend to their opinions about the impact of many of the nation’s institutions, according to a Pew Research Center survey, and when it comes to the news media, this partisan gap is growing wider. 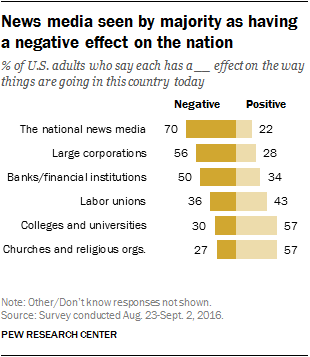 Majorities in both parties view the news media’s impact negatively, but this opinion is far more prevalent among Republicans and Republican-leaning independents (85%) than among Democrats and Democratic leaners (59%). Just 9% of Republicans say the media have a positive effect on the way things are going in the U.S., compared with 33% of Democrats.

Democrats are about twice as likely as Republicans to view labor unions positively (58% vs. 27%), and while 72% of Democrats say colleges and universities have a positive effect, fewer than half of Republicans (43%) say the same.

Views of churches and religious organizations also are divided along partisan lines, though in this case Republicans are more likely than Democrats to say they have a positive effect (73% vs. 49%).

Overall, only two of the six institutions included in the survey – churches and religious institutions (57%) and colleges and universities (57%) – are viewed positively by majorities of the public.

Americans have become much less positive about tech companies’ impact on the U.S.
64% of Americans say social media have a mostly negative effect on the way things are going in the U.S. today
Republicans have doubts that colleges, K-12 schools are open to range of viewpoints
6 key takeaways about how Americans view their government
Republicans increasingly critical of several major U.S. institutions, including big corporations and banks