The economy is at the forefront of Hispanic voters’ minds in this presidential election year, with 86% saying the economy is very important to their vote, according to a recent Pew Research Center survey. But while Hispanics are on the same page with the overall population about the importance of the economy, they are more positive about its condition and their family’s finances than some other racial and ethnic groups.

A third (33%) of Hispanics rate the economic conditions in the country today as excellent or good, a share equal to that among blacks but higher than that among whites (25%), according to the June survey. In addition, Hispanics are less likely than others to say their family’s income is falling behind the cost of living – 45% say so, compared with 55% of whites and 56% of blacks who say the same.

Despite this economic optimism, about half (52%) of Latinos say jobs are difficult to find in their community, a share similar to blacks and whites. At the same time, the unemployment rate for Latinos has improved over the past year, standing at 5.8% in the second quarter of 2016, down from 6.7% a year ago. However, it remains above the 4.7% national average for non-Hispanics. 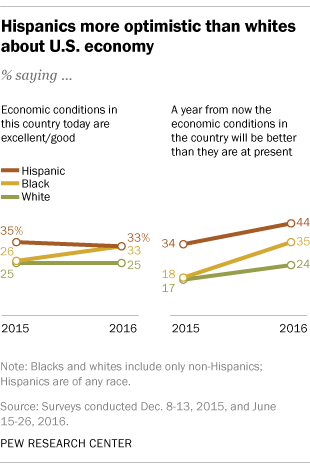 Still, in recent years Latinos have grown more optimistic about the future of their personal finances, according to Pew Research Center’s 2015 National Survey of Latinos. Last year, eight-in-ten Latinos (81%) said they expect their family’s financial situation to improve a lot or some in the next year, up from 67% who said the same in December 2011. (Among the U.S. public, our most recent survey found the share has increased more modestly, from 56% in June 2011 to 66% in June 2016.)

Latinos also continue to be more optimistic than other groups about the future of the nation’s economy. In the June 2016 survey, 44% of Latinos said they expect economic conditions in the U.S. to be better a year from now, compared with 35% of blacks and 24% of whites.