Far more Americans continue to sympathize more with Israel (54%) than with the Palestinians (19%) in the Middle East dispute, according to our recent foreign policy survey. And half of Americans (50%) think a way can be found for Israel and an independent Palestinian state to coexist peacefully, while 42% say this is not possible. But attitudes on both measures are deeply divided along ideological, generational and religious lines, and in some cases these gaps have widened markedly in recent years. 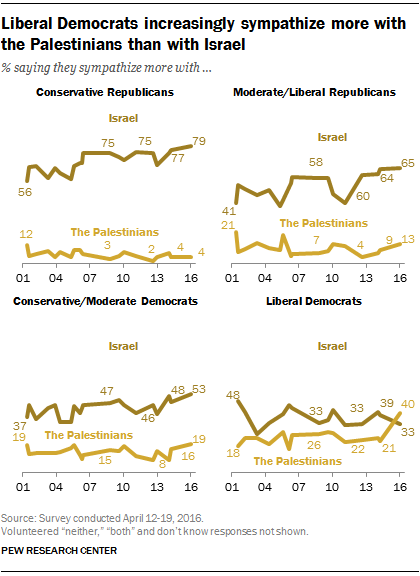 Views of Israel and the Palestinians have become more ideologically polarized. In early September 2001, just before the 9/11 terrorist attacks, there were only modest partisan and ideological differences in Israeli-Palestinian sympathies. But since then, and especially over the past decade, the share sympathizing more with Israel than with the Palestinians has increased among all ideological groups, with the exception of liberal Democrats.

The share of liberal Democrats who side more with the Palestinians than with Israel has nearly doubled since 2014 (from 21% to 40%) and is higher than at any point dating back to 2001. 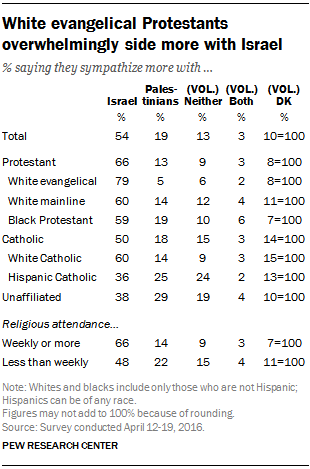 Views are more mixed among Hispanic Catholics – 36% sympathize more with Israel and 25% more with the Palestinians, while 24% volunteer that they sympathize with neither side.

The religiously unaffiliated are similarly divided – 38% sympathize more with Israel and 29% more with the Palestinians, while 19% say neither. Support for Israel has increased across most religious groups over the past decade. But there has been less change in opinions among the religiously unaffiliated: In 2006, 42% sympathized more with Israel, while 15% were more sympathetic toward the Palestinians. 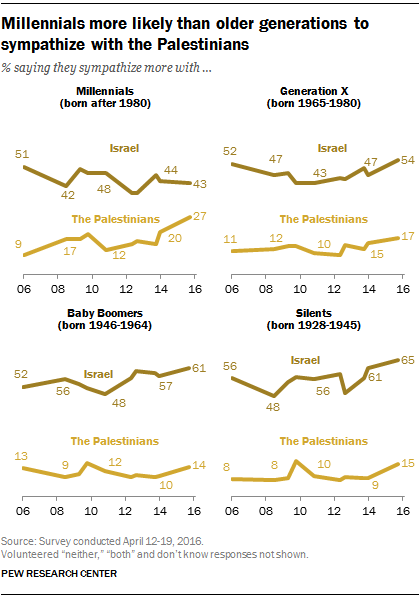 Among Gen X, Baby Boomers and Silents, more sympathize with Israel than the Palestinians by a ratio of at least three-to-one. 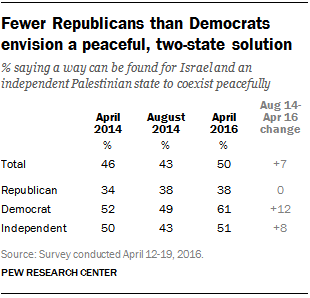 Americans are somewhat more optimistic that Israel can “coexist peacefully” with an independent Palestinian state. More Americans (50%) say that there is a way for Israel and an independent Palestinian state to coexist peacefully than say that there is not (42%). Optimism about a peaceful, two-state solution is somewhat greater today than in August 2014 (43%), shortly after the end of weeks of hostilities between Israel and Hamas.

As with Mideast sympathies, there are age and partisan differences in views of prospects for a two-state solution. Six-in-ten adults younger than 30 say a way can be found for Israel and an independent Palestinian state to coexist peacefully. Among those 65 and older, just 41% say the same.

Most Democrats (61%) say it is possible for an independent Palestinian state to coexist peacefully with Israel. Just 38% of Republicans agree; most (55%) say such an outcome is not possible.