Democrats who back Hillary Clinton differ from those who support Bernie Sanders in their views of many foreign policy issues, with some of the starkest divisions on fundamental questions relating to the U.S.’s role in the world, according to Pew Research Center surveys conducted in March and April. 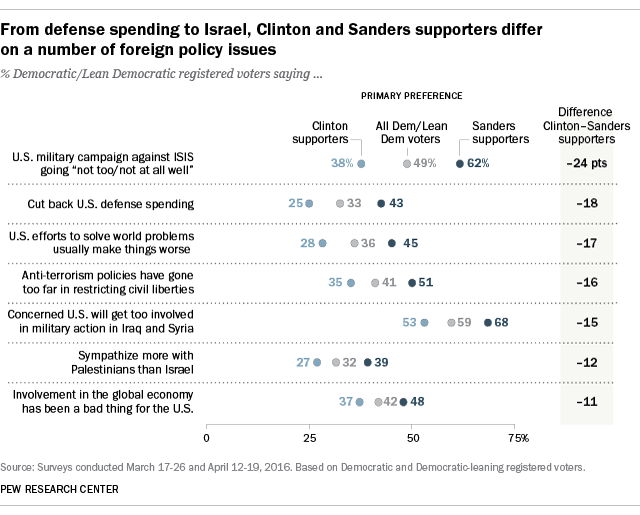 Sanders supporters also are less likely than Democratic voters who back Clinton to say that the U.S. should help other countries deal with their problems (41% vs. 52%). A majority of those who prefer Sanders (54%) say that the U.S. should deal with its own problems and let other countries deal with their own problems as best they can, while 45% of Clinton supporters hold this view. 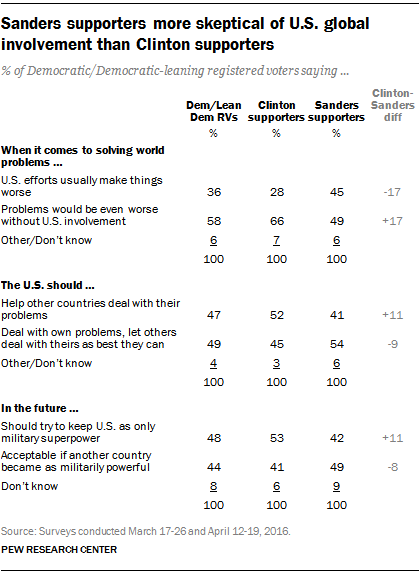 (For a look at how GOP voters view these and other issues, see “Trump supporters differ from other GOP voters on foreign policy, immigration issues.”) 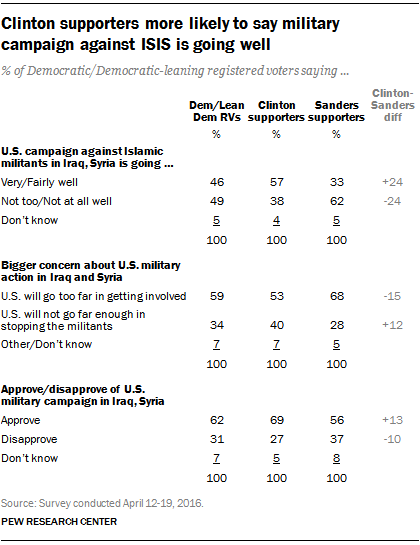 A majority of Democratic and Democratic-leaning registered voters (62%) approve of the U.S. military campaign against the Islamic militant group ISIS, though more who support Clinton (69%) than Sanders (56%) in the primary back military action. 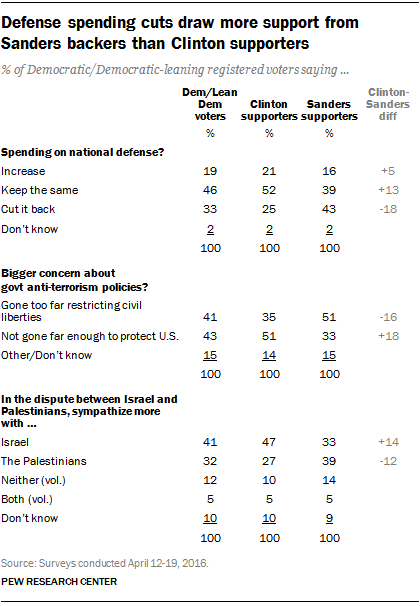 When it comes to military spending, there is little support among either Clinton or Sanders backers for increasing the level of spending. But far more supporters of Sanders (43%) than of Clinton (25%) would like to see reductions.

On some of the issues on which there are divisions among supporters of the two Democratic candidates – including on the military campaign against ISIS and support for Israel or the Palestinians – GOP voters are largely in agreement. Conversely, while Republican voters are split over many aspects of immigration policy, Democratic voters are largely in sync with each other. For instance, overwhelming shares of both Sanders supporters (82%) and Clinton supporters (78%) say that immigrants to the U.S. strengthen the country. Only about a third of Republican voters (32%) say immigrants strengthen the country, but GOP voters who did not support Donald Trump in the primaries were more likely than Trump supporters to express this view (41% vs. 20%).

Key findings on how Americans view the U.S. role in the world
A snapshot of the top 2020 Democratic presidential candidates’ supporters
6 charts that show where Clinton and Trump supporters differ
5 facts about Trump supporters’ views of immigration
Mixed verdict from public on America’s global standing