Apprehensions of children and their families at the U.S.-Mexico border since October 2015 have more than doubled from a year ago and now outnumber apprehensions of unaccompanied children, a figure that also increased this year, according to a Pew Research Center analysis of U.S. Customs and Border Protection data. 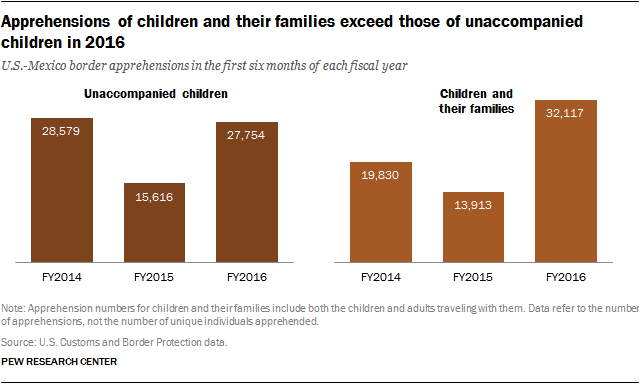 Border apprehensions of children, considered an indicator of the flows of child migrants entering the U.S. illegally, dropped off steeply in fiscal 2015 as Mexico stepped up deportations of Central American children and the U.S. government launched public information campaigns in Central American countries to discourage children from making the trip north. The U.S. also sped up the processing of immigration court cases, but a large backlog in cases still exists. 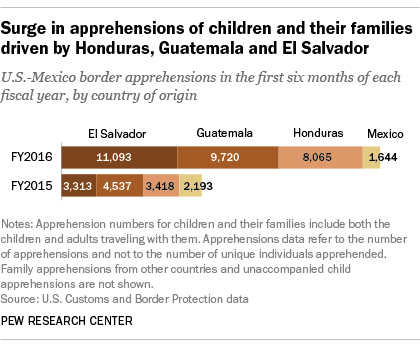 U.S. government officials have started to prepare for a possible increase in migration from Central America this summer. For example, the Department of Health and Human Services has requested additional contingency funding from Congress to shelter apprehended children. In addition, the governor of Texas extended the deployment of the state’s National Guard at the border with Mexico in December, which coincided with a spike that month in border apprehensions.

Roughly two-thirds of family apprehensions in this fiscal year have come at the U.S. Customs and Border Protection’s Rio Grande sector, located along the southernmost tip of Texas and bounded by Mexico and the Gulf of Mexico. (The sector accounted for a similar share of apprehensions during the first six months of fiscal 2014 and fiscal 2015.)

Note: This post and the text of the first chart have been updated to reflect the fact that the data refer to the number of apprehensions and not the number of unique individuals apprehended.