Republicans and Democrats continue to disagree deeply over immigration policies, including how to deal with undocumented immigrants living in the U.S. and whether to build a wall along the U.S.-Mexico border.

Underlying these differences is a substantial – and growing – partisan divide over whether immigrants generally are a strength or burden on the country.

In that time period, opinions about immigrants have shifted dramatically. In our latest national political survey, released in March, 59% of the public say immigrants strengthen the country, while 33% describe them as a burden. In 1994, opinions were nearly the reverse: 63% said immigrants were a burden and 31% said they strengthened the country.

Between 1994 and 2005, Republicans’ and Democrats’ views of immigrants tracked one another closely. Beginning around 2006, however, they began to diverge. In October that year, the partisan gap between Republicans and Democrats grew to 15 percentage points. Since then, the share of Democrats and Democratic-leaning independents saying that immigrants strengthen the country steadily increased, from 49% then to 78% now, while the share with this view among Republicans and Republican leaners has shown little change (34% then, 35% today). 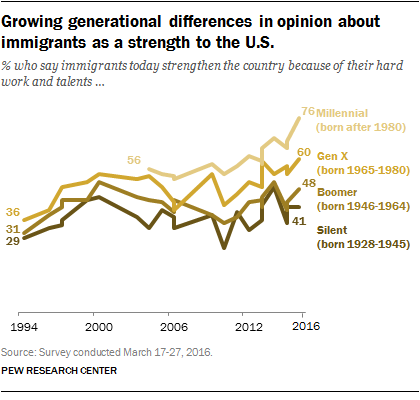 Generational differences in attitudes about immigrants have been evident since the mid-1990s, but they too have grown wider.

As of March, 76% of Millennials say immigrants strengthen the country, up from 59% in early 2013. Among those in Generation X, there has been an 11-point increase in positive views of immigrants since then (60% now, 49% then).

Among both Baby Boomers and those in the Silent Generation, opinion about immigrants grew more positive between 2013 and 2014, but has become more negative since then. Today, 48% of Boomers and just 41% of Silents say immigrants strengthen the country.

Since 2013, majorities of both Democrats and Republicans have said that undocumented immigrants living in the U.S. should be allowed to stay in this country legally. But partisan differences on this issue have increased as well.

Currently, 75% of the public says that undocumented immigrants now living in the U.S. should be allowed to stay legally if certain requirements are met, while 23% say they should not.

Across generations, majorities favor providing a way for undocumented immigrants to remain in the U.S. legally if they meet certain conditions. But support is more widespread among Millennials (82% favor) than among Gen Xers (73%), Boomers (71%) or Silents (70%).

The idea of building a wall along the U.S.-Mexico border, a centerpiece proposal of Donald Trump’s campaign, is favored by only about a third of the public (34%), while 62% are opposed.

The proposed border wall is deeply divisive along partisan lines. By nearly two-to-one (63% to 33%), Republicans and GOP leaners favor building a wall along the entire U.S.-Mexico border. By contrast, just 13% of Democrats favor building a border wall, while 84% are opposed.

There also are substantial generational and ethnic differences in views of a border wall. Just 20% of Millennials favor building a wall along the entire U.S.-Mexico border, which is far lower than the shares of Gen Xers (36%), Boomers (43%) and Silents (47%) who favor this proposal. Whites (43% favor) are more than twice as likely as blacks (13%) and Hispanics (16%) to favor building a border wall.

As with views of other policy proposals, support for a border wall varies widely among supporters of the Republican and Democratic presidential candidates. Fully 84% of Republican and Republican-leaning registered voters who support Trump for the GOP nomination favor building a border wall, compared with 64% of those who support Ted Cruz and just 45% of those who back John Kasich. Among Democrats and Democratic-leaning voters, large majorities of those who support either Hillary Clinton or Bernie Sanders oppose construction of a wall on the Mexican border (83% and 91%, respectively).

For more on how candidates’ supporters view key issues in the campaign, see our report, “Campaign Exposes Fissures, Values and How Life Has Changed in the U.S.”

Majority of Americans continue to say immigrants strengthen the U.S.
Tea Partiers are not all immigration hawks
Democrats See Immigrants as a Strength for the U.S., Republicans View Them as a Burden
A divide between college, non-college Republicans
What Americans want to do about illegal immigration