“Did you happen to vote in the election this November, or did things come up that kept you from voting?”

It’s a straightforward question, but the answers yielded some interesting results. One-in-six (16%) of those who say they “definitely voted” in the 2014 midterm election have no record of voting in commercially available national voter files, according to a Pew Research Center analysis.

So did they vote, or didn’t they? It’s important to know, because this is one of the means by which pollsters gauge the accuracy of their likely-voter predictions for future elections.

Determining who actually went to the polls and who did not is a challenge because, while the presence of a record of voting almost certainly means that a person voted, the absence of a record doesn’t necessarily mean they did not.

To examine the phenomenon of voting mismatches, we matched members of our American Trends Panel to a consumer database that includes official state turnout records as well as other other information on voters’ turnout history. We then compared the official records with respondents’ survey answers. A more detailed methodology can be found here.

So, why don’t we see a voting record for some people who tell us they voted?

One likely reason for at least some of this mismatch is the tendency for people to over-report “good” behaviors, such as voting, giving to charities, or attending religious services, while underreporting unattractive behaviors, such as drug and alcohol abuse. This phenomenon is known as the social desirability bias.

Another likely reason for the mismatch, as past research has found, is that the voting record for some people who actually voted is missed by commercial voter files. This happens most often for people who have recently moved. This error may have implications for campaign pollsters who rely on previous voting history in voter files to draw samples of likely voters or to help predict future voting behaviors.

This mismatch is also more common among Hispanics (27%) than whites or blacks (15% of both white and black voters are mismatched).

Degree of mismatch differs by income, too. Lower-income voters are less likely to have their self-reported vote match their voting record. One-quarter (24%) of those making less than $30,000 a year say they “definitely voted” but have no record of voting on the file. Only 12% of voters making more than $75,000 a year have the same mismatch. 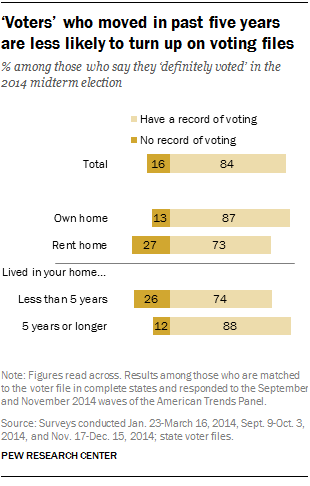 The mismatch group is also significantly more likely to have changed residences in the past few years, making it more challenging for voter databases to maintain up-to-date records of their voting history. For example, those who have lived at least five years at their current residence are significantly more likely to have their self-reported vote match the voter record than those who have a shorter residential tenure (12% vs. 26%). Renters (27%) are twice as likely as homeowners (13%) to say they voted but to not have a record of voting.

Demographic differences in voting mismatches persist even when mobility and other variables are held constant. For example, married people are more likely to match their voting records, as are those with a high family income. But age is the strongest individual predictor of matching, even taking into account the lifestyle characteristics that are associated with aging, such as marriage, higher income and homeownership. A more detailed academic analysis explores these and other factors that play a role in why voter files miss certain kinds of people.