The 2016 presidential campaign has exposed class and education differences among Republicans. In several primary contests to date, billionaire Donald Trump has fared better among white Republican voters who have not completed college than among white GOP college graduates.

A review of Pew Research Center surveys over the past several months finds that white Republican college graduates and white Republicans who do not have a degree generally agree on many political and policy issues. But there also are clear differences in their views on immigration, racial issues, politics and government, and business.

In Pew Research Center’s survey of attitudes about government, conducted Aug. 27-Oct. 4, 2015, Republicans overall were more likely to view immigrants as a “burden” to the U.S. than as a “strength.” This view was more widely shared among less-educated white Republicans than among those who have completed college.

By a wide margin, Republicans favored building a fence along the entire U.S.-Mexico border. Support for a border fence was more widespread among white Republicans who have not completed college (75%) than those who have (64%).

White Republicans with less than a college education also expressed less positive views of increasing racial and ethnic diversity in the U.S. About half (48%) said having “an increasing number of people of many different races, ethnic groups and nationalities” makes the U.S. a better place to live. Among white college-educated Republicans, 65% viewed growing racial and ethnic diversity positively. 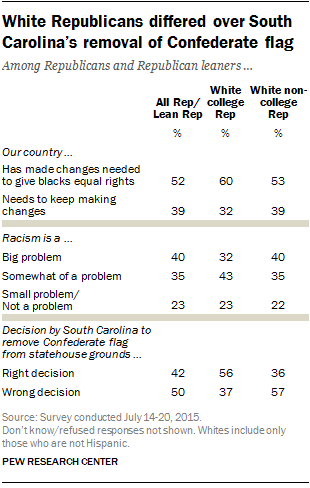 Similarly, 32% of better-educated white Republicans – and 40% of those who do not have a college degree – said racism is a “big problem” in society. Among the total public, 50% saw racism as a big problem.

There were much sharper differences over South Carolina’s decision to remove the Confederate flag from the statehouse grounds. By a wide margin (56% to 37%), white college-educated Republicans said the decision was right; by nearly an identical margin (57% to 36%), white non-college Republicans said it was wrong.

Opinions about politics and government 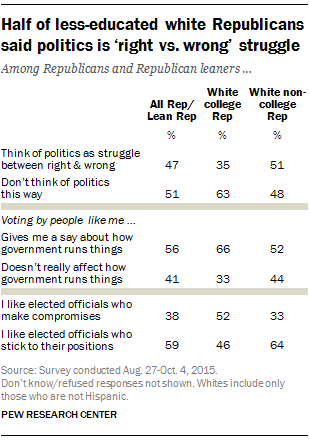 Our survey on government found widespread dissatisfaction with politics, especially among Republicans. Fully 79% of all Republicans and Republican leaners said their side in politics loses more often than it wins. There were no significant differences on this question between white college graduates and whites who had not completed college or on whether they felt “angry” with the federal government.

White non-college Republicans also were more skeptical that voting gives people a voice in government. More than four-in-ten (44%) said voting “by people like me” does not affect how government operates, compared with 33% of white Republican college graduates.

In a December survey of opinions about the middle class in the U.S., less-educated white Republicans were more likely than white Republican college graduates to say the federal government does too little for older people (70% vs. 49%) and the poor (40% vs. 29%).

Conversely, less-educated white Republicans were more likely to say the government does too much for the wealthy (50% vs. 37%).

Notably, most white Republican college graduates (52%) and white Republicans who had not completed college (58%) said the federal government does too little for the middle class.

Opinions about business and economic fairness 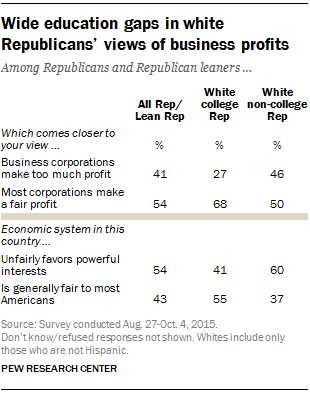 Correction: An earlier version of this post gave incorrect percentages for support of a border fence.