Many Americans are in an “It depends” frame of mind when they consider a central trade-off of the digital era: Will you share personal information in return for a product, service or other benefit?

A new report from Pew Research Center explores six different scenarios where Americans might encounter that privacy-related question. It finds that people consider a variety of things in making their decisions, such as the value of the benefit they are being offered, the circumstances of their lives, how they feel about the organization that is collecting the data, what happens to their personal data after it is captured and how long the data are retained.

This report builds on other recent Pew Research Center survey results showing the emotions Americans feel as they struggle to understand the terms that govern sharing personal information with companies.

Here are some of the main insights from the survey and focus groups that were conducted for this research:

1Different bargains have different value to Americans. A trade-off considered acceptable by 54% of Americans was having surveillance cameras in the office in order to improve workplace security and help reduce thefts. On the other hand, a scenario involving the use of a “smart thermostat” in people’s homes that might save energy costs in return for insight about people’s comings and goings was deemed “acceptable” by only 27% of adults, while 55% saw it as “not acceptable.” 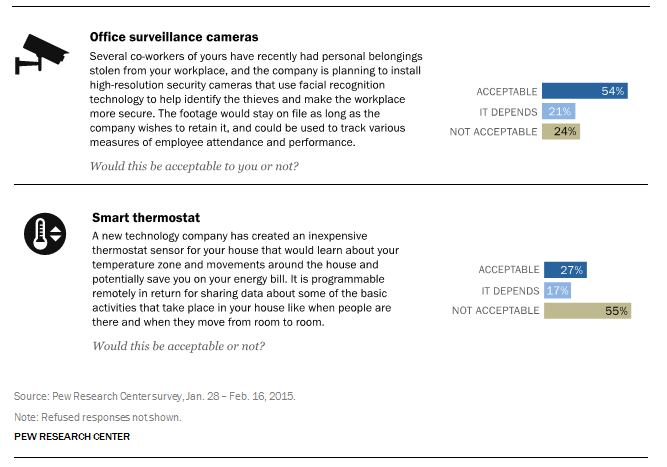 2There are very few devil-may-care people who are eager for every bargain involving personal information. One-in-six adults (17%) would not take any of the deals in the scenarios and only 4% of Americans said they would find all of the six scenarios “acceptable.” A substantial majority indicated they would accept at least one of these transactions — which, in addition to surveillance cameras and smart thermostats, included privacy trade-offs involving retail loyalty cards, auto insurance and free social media. Taken together, these findings are an indicator of how Americans’ views are very contingent on the context of the deal.

3In our focus groups, people spoke angrily about the potential negative consequences of data sharing. They reacted negatively to spam and unwanted contacts that occurred after sharing information, they worried about hackers, and they expressed particular sensitivities about location data tied to their homes and driving habits. One of the most unsettling privacy concerns to many of the focus group participants was how hard they feel it is to get information about what is collected and who is collecting the data. Some cited concerns about “Big Brother” profiling. Some also voiced suspicions about the motives of the companies and organizations collecting the data, saying they worried companies had ulterior motives for harvesting personal data. One focus group participant noted, “Orwell was a prophet.”

4The value of bargains and free services was a key factor in peoples’ decisions to share their information with companies. Many said they wanted convenient access to information, goods and services. And a number made the point that personal privacy is not necessarily a part of all life. They made the case that certain realms are not inherently private, and that different rules about surveillance and sharing apply to them. In the instance of workplace surveillance cameras, one respondent said, “It is the company’s business to protect their assets in any way they see fit.”

5Many focus group participants were uncertain, resigned and annoyed – or worse – with the current state of affairs regarding privacy. At the same time, some accept that this is part of modern life and others hope technological and legal solutions can be found. In the focus groups and open-ended responses to survey questions, though, people are often much more likely to speak of the darker side of personal information trade-offs than they are to cite the benefits.