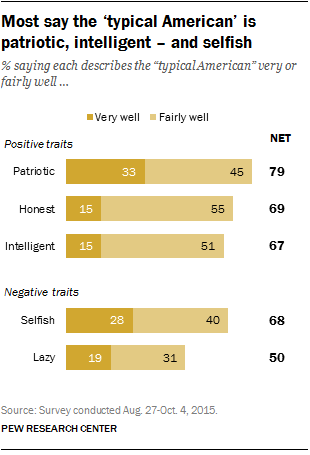 The American public has shown itself to be quite critical in its views of politicians and the federal government, expressing low levels of trust in both. Yet a recent Pew Research Center survey of attitudes about government also finds that Americans pull no punches when assessing the strengths and weaknesses of their fellow citizens. 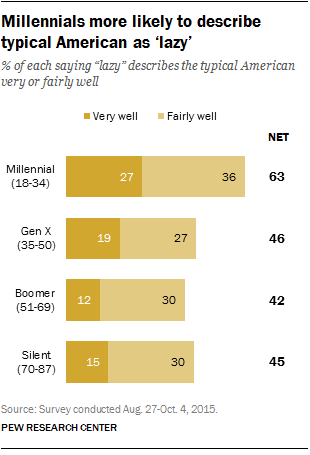 In general, younger people tend have more negative views of the typical American than do older adults. Millennials, who are highly critical of members of their own generation, are especially likely to see the typical American as lazy: 63% say that term applies at least fairly well, compared with no more than about half in older age cohorts.

It’s worth noting, however, that in a separate Pew Research Center survey released today, few Americans call themselves “lazy.” 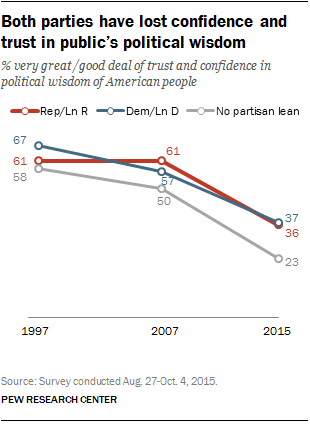 When it comes to politics, the public also is self-critical: Just 34% say they have “very great” or a “good” deal of trust and confidence in the political wisdom of the American people. Fully 63% have “not very much” confidence or “no confidence at all.”

These views have changed dramatically since 2007, when a majority (57%) had at least a good deal of trust and confidence in the American people’s political wisdom. The decline has come among both Democrats and Republicans: Just 37% of Democrats and Democratic leaners have at least a good deal of confidence in the public’s political wisdom, as do 36% of Republicans and Republican leaners, down from 57% and 61%, respectively, eight years ago.

However, even as the public readily acknowledges the shortcomings of Americans, a majority nonetheless see themselves as better able than politicians to solve the nation’s problems. 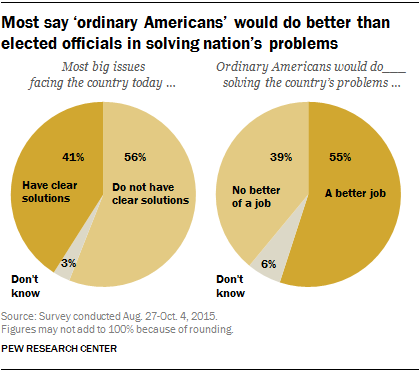