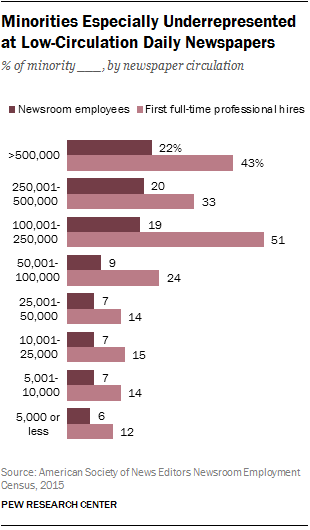 The past two years have seen Dean Baquet become the first black executive editor of The New York Times and Lester Holt become the first black solo anchor of a weeknight network news program. But minorities are still underrepresented at U.S. news organizations, especially when it comes to the places that would-be journalists traditionally try to break into the business: smaller local TV and newspaper outlets.

Although minorities (including black, Hispanic, Asian American, Native American and multiracial populations) make up over a third of the U.S. adult population (35%), they make up only 22% of the local television news workforce, according to a study by the Radio Television Digital News Association. The figure is even lower for daily newspapers, where only 13% of newsroom employees are minorities, according to an annual survey of newsroom employment by the American Society of News Editors (ASNE). These figures have changed little over the past two decades.

One factor behind the figures in these two studies is what happens at the hiring stage for those seeking to enter the news business. A recent analysis by Alex T. Williams pointed to data showing that minorities who received undergraduate journalism or communications degrees and specialized in print journalism were 17 percentage points less likely than non-minorities to find a full-time position within a year of graduating; the same held true for graduates specializing in broadcasting. 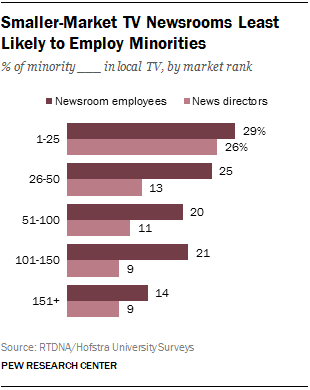 At high-circulation daily newspapers, minorities make up about one-in-five newsroom workers. But that figure falls to less than 10% at lower-circulation dailies. For instance, only 6% of employees at daily papers with circulations of 5,000 or less are minorities.

Budget cuts at daily newspapers also seem to be hitting minority employees harder. Nearly one-in-four minority employees at dailies (22%) left or lost their jobs in 2014, the largest level of minority job loss since ASNE began gathering data in 1984. Of white employees, 14% left their organizations in 2014.

The pattern in small versus large newsrooms also holds true for the local TV industry (though minority employment is higher there than for newspapers). Minorities make up 29% of the workforce in the top 25 markets, but 14% in the smallest markets. When it comes to the leadership position of news director, there is rough parity in the top markets: Minority employees make up 29% of the workforce and 26% of the news directors, a 3-percentage-point gap. But outside these largest markets, TV newsrooms are considerably more likely to employ minorities than they are to have a non-white news director. For markets ranked 26-50, minorities make up 25% of the workforce but only 13% of news directors. (At newspapers, 10% of supervisors are minorities, but ASNE did not break this out by circulation category.)

What these data do not address are the reasons why this disparity exists. Smaller news organizations may differ from large ones in a number of ways: the size and demographics of the audience they serve, what resources they have available to recruit employees, and the overall size of their workforce, among other factors. Nevertheless, the divide in minority employment is clear and consistent across both daily newspapers and local TV.