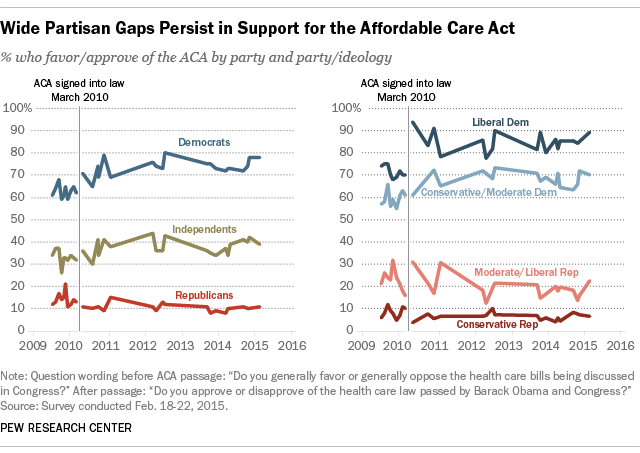 Opponents of President Obama’s health care law have fought it on many fronts, ranging from multiple efforts by House Republicans to repeal or alter it to the legal challenge spearheaded by conservatives that led to today’s Supreme Court ruling on the law, which upheld a key provision. One constant in the battle over the Affordable Care Act has been the depth of the partisan divide over the legislation.

The partisan divisions over this issue are long-standing and deeply entrenched. Six years ago, when the legislation was still being debated, 61% of Democrats and just 12% of Republicans favored the proposal. In the five years since the ACA became law, those differences have endured. 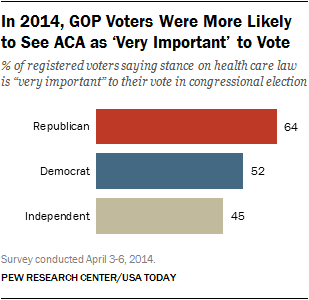 The intensity of that divide was apparent in a survey conducted in April 2014, leading up to last year’s midterm elections. About two-thirds (64%) of Republican registered voters said a candidate’s position on the ACA was very important to their vote, compared with 52% of Democrats and 45% of independents.

The level of ideological polarization in opinions about the government’s responsibility to provide health care was striking. Fully 89% of adults with consistently liberal views said it was the responsibility of the federal government to make sure all Americans have health care coverage. Just 2% of those with consistently conservative attitudes agreed.

Looking beyond the court case, a Kaiser Family Foundation survey conducted in June found that partisans and the public at large were divided about whether the debate over the ACA should continue as the country heads into the 2016 elections. About half (49%) of the overall public said it was important to keep the debate going, while 45% said they were tired of hearing about it and wanted to move on to other issues. This divide was also reflected among Republicans, Democrats and independents.

State of the Union 2018: Americans’ views on key issues facing the nation

Most Want to Keep or Fix Health Care Reform