This week’s political battles over immigration, funding for the Department of Homeland Security and the Keystone XL pipeline have been waged by opposing parties that possess starkly different strengths and weaknesses.

Majorities say the Democratic Party is open and tolerant, cares about the middle class and is not “too extreme.” By contrast, most Americans see the GOP lacking in tolerance and empathy for the middle class, and half view it as too extreme. 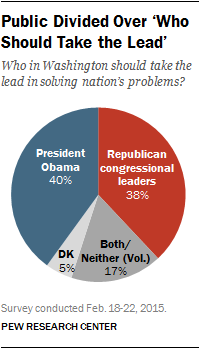 Nonetheless, the Republicans more than hold their own with the Democrats in views of which party can better handle major issues. The Republican Party runs even on the economy and immigration and holds double-digit leads over the Democrats on terrorism, foreign policy and taxes.

President Obama’s job approval has ticked up in recent months, to 48% currently, and his rating dwarfs the 26% approval measure for the leaders of the new Republican Congress. Yet the public is divided over whether Obama or Republican congressional leaders should take the lead in solving the nation’s problems: 40% say Obama while 38% say GOP leaders. That is virtually unchanged from a few days after the midterm elections in November.

The latest national survey by the Pew Research Center, conducted Feb. 18-22, 2015 among 1,504 adults, finds that both parties are viewed by majorities as having strong principles. Somewhat more say this about the GOP (63%) than the Democratic Party (57%). 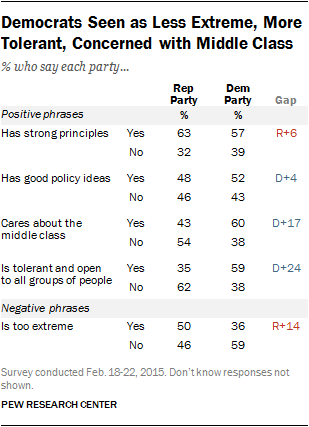 And while about as many say the Republican Party is too extreme (50%) as say it is not (46%), just 36% view the Democratic Party as too extreme; 59% say it is not. For the most part, opinions about the two parties’ traits are little changed from recent years.

And the Republican Party fares much better on issues than image. Despite the majority view that the GOP lacks empathy for the middle class, about as many Americans say the Republican Party (44%) as the Democratic Party (41%) can do better in dealing with the economy. On immigration the public also is divided: 45% say the Democrats can do better, while 43% prefer the GOP. The only issue on which Democrats have an edge is on health care (47% to 40%). 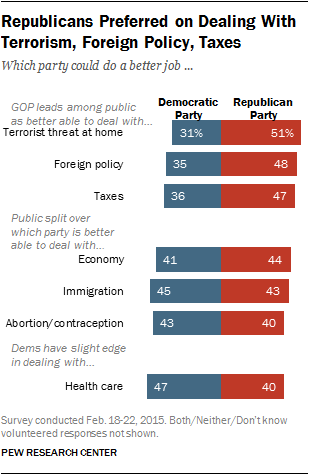 Republicans have opened substantial leads on dealing with the terrorist threat at home (20 points), making wise decisions about foreign policy (13 points) and dealing with taxes (11 points). On each of these issues, the GOP’s lead is as wide—or wider—than at any point in the last several years.

Views of the party best able to handle foreign policy have taken a particular turn in favor of the Republican Party: Today 48% say the GOP would do a better job on this issue, while 35% say the Democratic Party. This is the first time during the Obama administration that the GOP has held the edge on foreign policy. 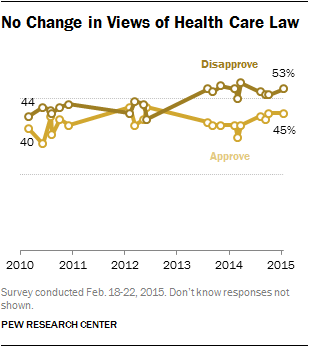 The survey finds that opinions of the 2010 health care law – which will soon face a major challenge in the Supreme Court – remain little changed: Public opinion continues to be closely divided, with views somewhat more negative than positive (53% disapprove, 45% approve).

Half of Democrats Say GOP Has Strong Principles

Overall, large majorities of partisans say their own party has strong principles, good policy ideas, cares about the middle class and is tolerant and open to all groups of people—and few say it is “too extreme.” At the same time, positive views of the other party are relatively uncommon, but there are some notable exceptions. 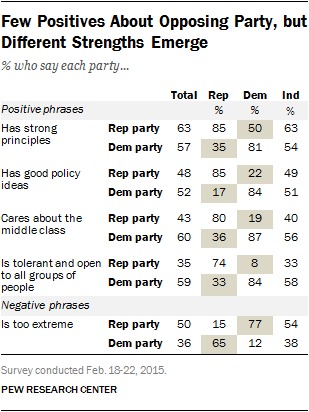 For instance, on most positive characteristics, fewer than a quarter of Democrats offer positive evaluations of the GOP, but half (50%) of Democrats say the GOP has strong principles. By comparison, 35% of Republicans say the same of the Democratic Party. 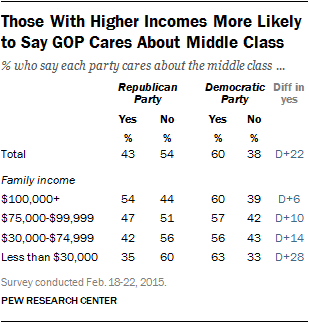 The Parties and Issues

The Republican Party has an advantage on several key issues, including terrorism and foreign policy, while Americans are divided about which party would do the best job on other key issues — the economy and immigration. Democrats maintain a slim edge as the party better able to handle health care.

The Republican Party continues to hold a sizeable (20-point) lead as the party that could do a better job “dealing with the terrorist threat at home.” But today, the Republican Party also has a 13-point edge when it comes to “making wise decisions about foreign policy.” This is the first time the GOP has had a significant advantage on this issue since 2002. As recently as October, neither party had an edge on this measure.

Partisans’ views on this issue are little changed since the fall; fully 81% of Republicans say the GOP is best equipped to handle foreign policy, while a smaller majority of Democrats (66%) say their party could do the better job. But the opinions of independents have shifted in the direction of the GOP: Currently, the Republican Party has a 24-point advantage on foreign policy among independents (52% vs. 28%); in October independents were about evenly divided (36% Republican Party, 34% Democratic Party).

The GOP is also now seen by more as the party better able to handle taxes (47% vs. 36%); in January 2014, neither party had an advantage on this issue (41% each). Though the views of Republicans and Democrats on this question are little changed over the last year, the GOP now enjoys a 27-point edge among independents (53% vs 26%); independents were more closely divided last year (43% said Republicans, 36% said Democrats).

Views of the Health Care Law, and its Future, Remain Polarized

The Affordable Care Act (ACA) remains highly polarizing. Although views of the 2010 health care law have not changed over the last several years, it continues to split the public overall, and Republicans and Democrats are largely on opposite sides of the issue. 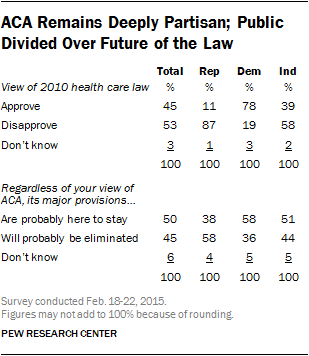 The balance of opinion among independents remains more negative than positive: 58% disapprove, while 39% approve. 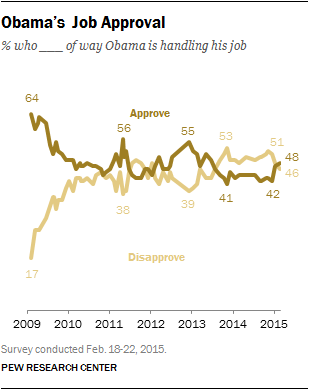 Barack Obama’s job approval is little changed over the last month, with Americans about equally likely to say they approve of his job performance (48%) as disapprove (46%). But his current ratings reflect a shift in a positive direction from last year. Obama’s rating among independents, in particular, has ticked higher in recent months; 45% of independents now approve of his job performance, similar to his rating last month (42%), but significantly higher than in December (39%) and throughout much of 2014. 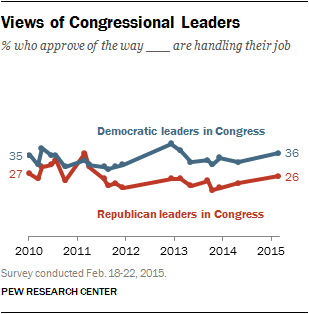 Currently 36% approve of the job performance of Democratic leaders, while just 26% approve of Republican leaders. Both ratings are slightly higher than they were last spring.

Democrats Have More Positive Image, But GOP Runs Even or Ahead on Key Issues
Survey ReportHalf of Democrats Say GOP Has Strong PrinciplesThe Parties and IssuesViews of the Health Care Law, and its Future, Remain PolarizedRatings of Obama, Congressional Leadership
About the Survey