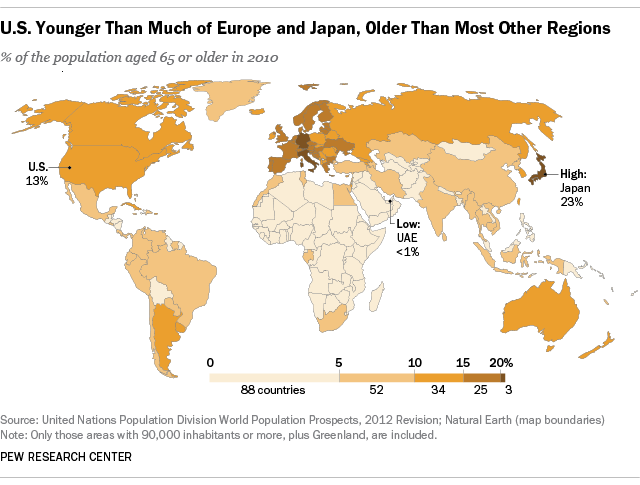 A new Pew Research Center report shows that in the United States, the share of people aged 65 or older will rise dramatically by 2050. However, the U.S. isn’t experiencing the same gray wave that many other developed nations in Europe and Japan are. At least one-in-five people in Japan, Germany and Italy are already 65 or older, and most other European countries are close behind. 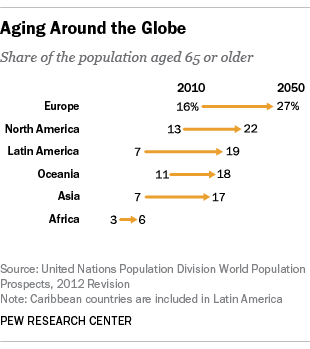 But thanks in large part to global increases in life expectancy, populations in all regions of the world are expected to age dramatically in the coming decades, according to the United Nations. Europe and North America will continue to lead this trend, with the largest shares of older people through the middle of the century. Currently, 16% of Europe is comprised of people 65 and older, as is 13% of North America. By 2050, one-fourth (27%) of Europe’s population will be at least 65 years old, as will 22% of North America’s. In Oceania, the share of older people is expected to rise from 11% to 18%.

Global aging has policy implications for nations with social programs designed to support older adults. In the U.S. now, about 38% of income among older people comes from government transfers, according to the Organization for Economic Cooperation and Development.

But what might the future hold, in terms of government support of older, retired people? The bulk of Americans who are still working are skeptical that they will receive Social Security benefits comparable to what today’s older people get, according to a new Pew Research Center survey.