Reports that Hillary Clinton will launch her presidential campaign April 12 raise inevitable questions: Will she be a stronger candidate now than she was in 2008? And which factors may help – or hurt – the former secretary of state in a second run for the White House? 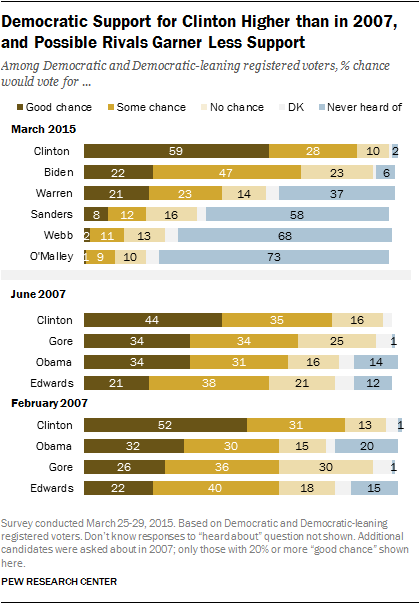 The bigger change, by far, is the state of Clinton’s possible Democratic competition. In early 2007, a first-term senator named Barack Obama was already running for president – and 32% of Democrats saw a good chance of supporting him. By June of that year, Clinton’s advantage on the “good chance” measure had narrowed to 10 points over Obama and former Vice President Al Gore (44%, versus 34% for each).

Today, no more than about one-in-five Democratic voters see a good chance of voting for any other Democrat: 22% say there is a good chance they would vote for Vice President Joe Biden, and about the same proportion (21%) say this about Sen. Elizabeth Warren of Massachusetts – and neither has shown serious signs of running. 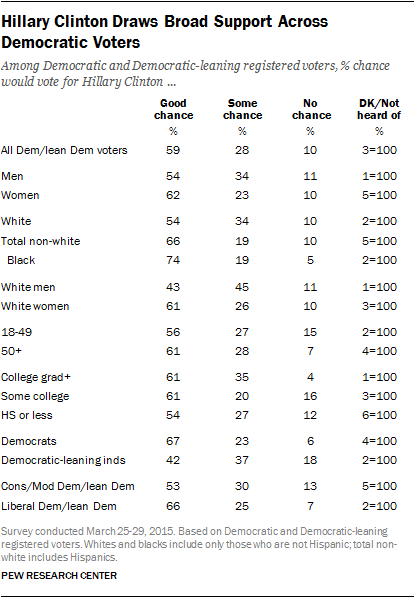 Support for Clinton dwarfs that for the three lesser-known figures in the Democratic field who have suggested they are running: Just 8% say there is a good chance they would vote for Sen. Bernie Sanders of Vermont, a Democratic-leaning independent, with even fewer supporting former Sen. Jim Webb of Virginia (2% good chance) or former Maryland Gov. Martin O’Malley (1% good chance).

Clinton has been in the public spotlight for more than two decades. Her personal favorability ratings have fluctuated a great deal over this period – from her tenure as first lady, through her election as a U.S. senator, and finally during her years as secretary of state.

She also brings a unique set of traits and experiences to the presidential campaign. Here are some early measures of how these might affect her candidacy:

The possible history-making aspect of Clinton’s candidacy also registers more strongly with Democratic women than with men. In a recent Pew Research Center survey, 69% of Democratic women, but just 46% of Democratic men, said they hope the U.S. elects a female president in their lifetime. Republican women and men – perhaps already contemplating a possible Clinton campaign – were far less likely than Democrats to say they were hoping for a woman president. Most Republican men (80%) and women (76%) said it did not matter to them if a female president is elected in their lifetime. 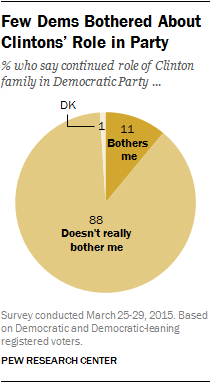 The ‘Clinton factor.’ At this early stage in the campaign, few people seem bothered by the Clinton family’s long involvement in Democratic politics, or by Hillary Clinton’s role in her husband’s administration. Asked in the current survey about the large role the Clinton family continues to play in the Democratic Party, just 11% of Democrats and Democratic-leaning independent voters say they are bothered by this, while 88% say it does not really bother them.

This is similar to views in a March 2014 survey conducted by the Pew Research Center and USA Today, when 51% of Democrats and Democratic leaners said that Hillary Clinton’s involvement in the Bill Clinton administration would help her if she decided to run for president; just 11% said it would hurt her and 37% said it would not make a difference. 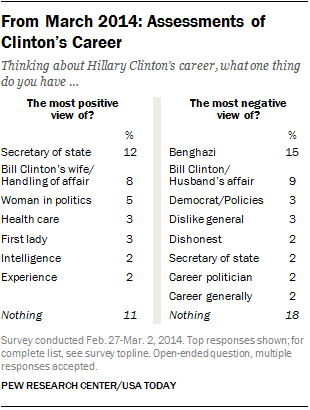 Clinton’s experience. In the same poll, now more than a year old, most people (67%) approved of Clinton’s job performance as secretary of state. (This was before the controversy over Clinton’s private email account.)

When people were asked in an open-ended format about the most positive and negative aspects of Clinton’s career, 12% volunteered her experience as secretary of state as the one thing they viewed most positively. Yet 15% cited “Benghazi” – Clinton’s handling of the 2012 attack on the U.S. consulate in Benghazi, Libya – as the most negative aspect of her background. 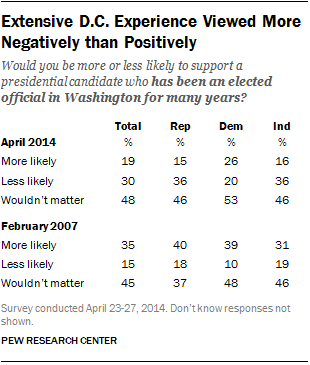 But by last year, those views had changed. More Americans viewed lengthy Washington experience as a negative (30%) than a positive (19%) for a presidential candidate; 48% said it wouldn’t matter. Among Democrats, Republicans and independents, the share saying they would be more likely to support a candidate with many years of Washington experience declined between 2007 and 2014.