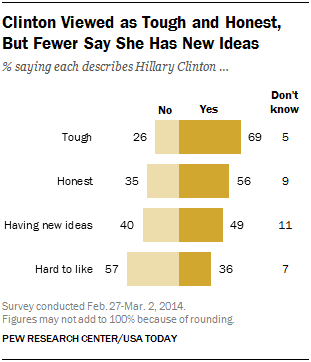 If she runs for president in 2016, Hillary Clinton would bring a number of potential strengths to the race, from her tenure as secretary of state to her perceived toughness and honesty. Fully 67% of Americans approve of the job she did as secretary of state, while majorities say she is tough (69%) and honest (56%).

The public also rejects the notion that Clinton is unlikable – a change from the 2008 Democratic primary campaign. In a memorable moment from that contest, then-candidate Barack Obama turned to Clinton during a debate and said sarcastically, “You’re likable enough, Hillary.” Today, just 36% say Clinton is “hard to like”; a majority (57%) says that phrase does not describe her. During the 2008 primary season, about half of voters found Clinton hard to like (51% in March 2008).

However, the new national survey by the Pew Research Center and USA TODAY, conducted Feb. 27-Mar. 2 among 1,002 adults, finds that Clinton is not widely seen as having new ideas. About half (49%) say the phrase “having new ideas” describes Clinton, while 40% say it does not; 11% offer no opinion.

And while Clinton’s performance at the State Department is viewed positively, her handling of the 2012 attack on the U.S. consulate at Benghazi, Libya registers as a negative aspect of her background. 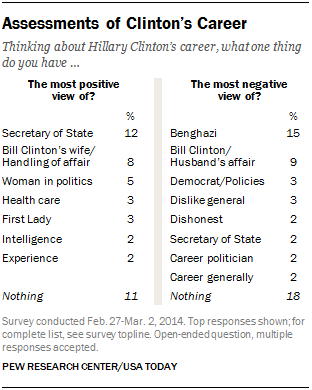 When people are asked to name in their own words the most negative thing about Clinton’s career, “Benghazi” is the most frequent response, cited by 15% of respondents. Among Republicans, 28% volunteer Benghazi as the most negative aspect of her career.

On the other hand, Clinton’s tenure at the State Department is mentioned most frequently as her biggest positive (by 12%), while 8% cite her role as Bill Clinton’s wife or the way she dealt with the Monica Lewinsky affair. 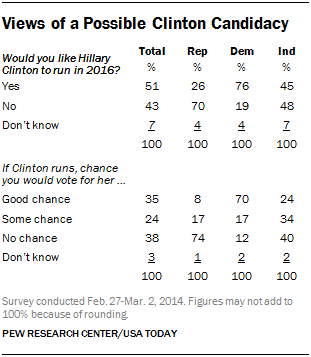 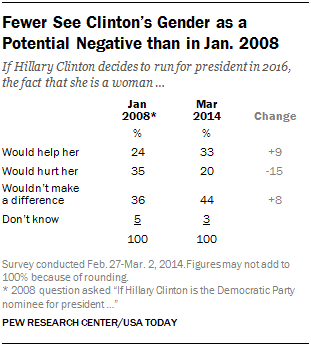 Opinions about the potential impact of Clinton’s gender on her candidacy have become more positive since her first try for the presidency in 2008. Currently, 33% say that if Clinton runs for president, the fact that she is a woman would help her; 20% say it would hurt her and 44% say it would make no difference. In early January 2008, when asked a slightly different question (would Clinton’s gender hurt her if she were the Democratic nominee), more said it would hurt than help (35% vs. 24%). 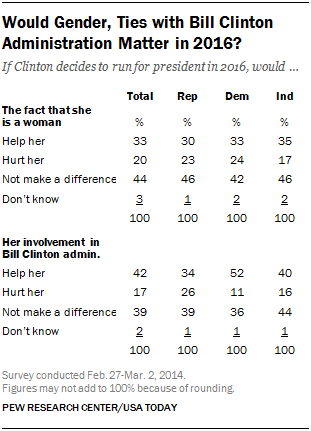 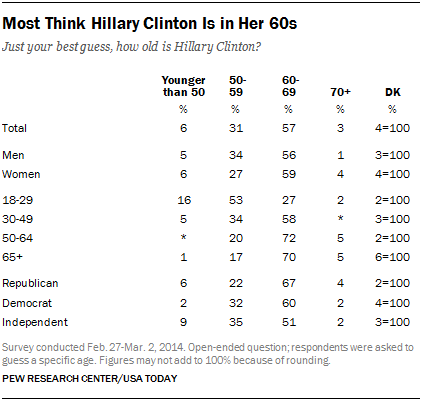 Younger adults (under age 30) are the most likely to underestimate Hillary Clinton’s age: fully 53% think she is in her 50s while another 16% say she is under 50. Older adults are more accurate, with majorities giving an age in the 60s.

There are only modest divides in views of Clinton’s age by party, though Democrats are somewhat more likely than Republicans to give an age in the 50s (32% vs. 22%). 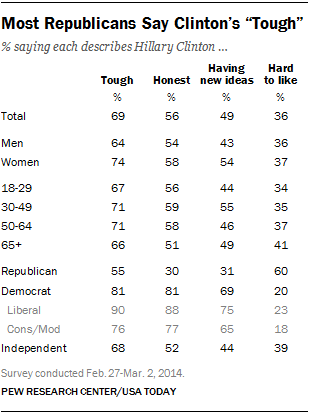 Nearly seven-in-ten say Hillary Clinton is described as tough (69%) and 56% say she is honest. In addition, most reject the notion that she is hard to like – just 36% say this. Her image is not as strong when it comes to the concept of having new ideas: 49% say this trait describes Hillary Clinton, while 40% say it does not.

While Republicans hold a negative opinion of Clinton generally, most (55%) say that she is tough. Far fewer Republicans view Clinton as having new ideas (31%) or honest (30%); 60% say she is hard to like.

Democrats hold positive views of Hillary Clinton across all the traits tested in the survey: broad majorities see her as tough (81%), honest (81%), and as having new ideas (69%); few see her as hard to like (20%). Liberal Democrats are especially likely to associate positive traits with Hillary Clinton.

Women express significantly more positive views than men of Clinton on two dimensions: 54% of women say she has new ideas, compared with 43% of men. And 74% of women say Clinton is tough; a smaller majority of men (64%) say this trait applies to Clinton. 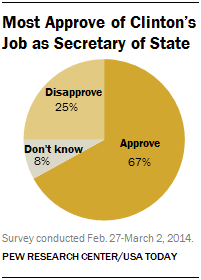 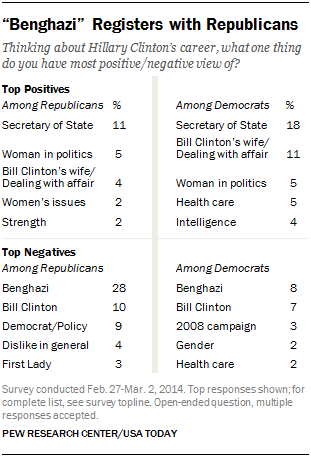 But Clinton’s tenure at the State Department also brings to mind some negative feelings among the public, particularly about the Benghazi attack. Overall, 15% of the public say Benghazi is the most negative thing about her career, with nearly three-in-ten Republicans (28%) and 8% of Democrats stating this.