Black immigrants make up a small but growing segment of the U.S. black population. Although the United States has long had a sizable black population as a legacy of slavery, voluntary black immigration to the U.S. is a relatively new development and is projected to grow in the coming decades. A new Pew Research Center report examines this trend and provides a statistical portrait of the nation’s black immigrant population.

Here are six key findings about the foreign-born black population in the U.S. 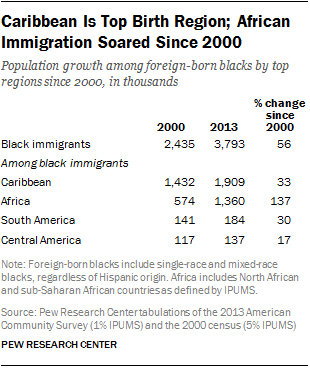 1The black immigrant population has more than quadrupled since 1980. Only around 800,000 blacks were foreign-born in that year, and by 2013 the number had climbed to 3.8 million, according to a Pew Research analysis of U.S. Census Bureau data. Immigrants are also making up a larger share of the overall black population – 8.7% of blacks were foreign-born in 2013, a share that is projected to almost double by 2060.

2The number of black immigrants from African nations has rapidly grown. Between 2000 and 2013, the black African immigrant population grew from 570,000 to 1.4 million, an increase of 137%. Africans make up 36% of the overall foreign-born black population, up from 24% in 2000. Still, half of all black immigrants were born in the Caribbean, with Jamaica and Haiti being the two largest birth countries, accounting for 18% and 15% of black immigrants, respectively.

3Black immigrants make up a double-digit share of the overall black population in some large metro areas.  In 2013, about one-in-three blacks (34%) living in the Miami-Fort Lauderdale-West Palm Beach metro area in Florida were immigrants. In the New York-Newark-Jersey City metro area, foreign-born blacks made up 28% of the black population. And in the Washington, D.C., metropolitan area, 15% of the area’s blacks were foreign-born. 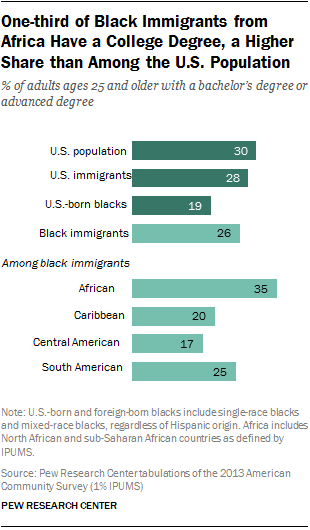 5Overall, black immigrants earn college degrees at a slightly lower rate than Americans in general, but the share of foreign-born blacks from Africa with a college degree is higher than that of the overall U.S. population. About one-quarter (26%) of foreign-born blacks ages 25 and older had at least a bachelor’s degree in 2013, which falls somewhat below that of the overall U.S. population, at 30%. However, black immigrants ages 25 and older from Africa have high levels of educational attainment – 35% have a college degree, a higher share than Americans overall.