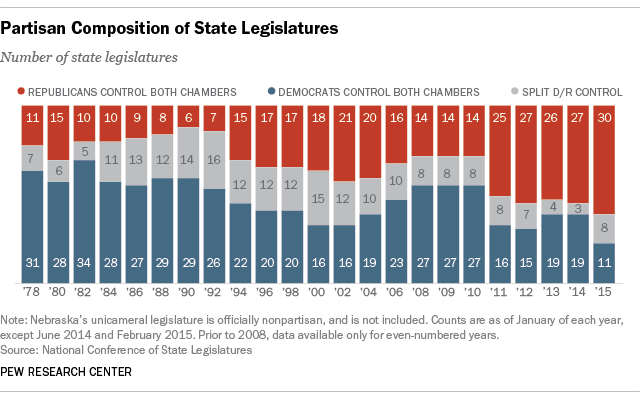 Late last month, a Democratic National Committee “victory task force” released its preliminary report on what the party needs to do to avoid a repeat of the pasting it received in November’s midterms. One of its main recommendations: The party needs to take control of more state legislatures in time for the redistricting that will follow the 2020 census.

Though they tend not to get much attention from Beltway insiders, state legislatures are key players in redrawing congressional-district boundaries. In most states, it’s the state legislature that takes the lead role in drawing new district maps, according to the National Conference of State Legislatures. (Commissions do this job in 13 states and have advisory or backup roles in seven others, although the Supreme Court is currently weighing the legality of the commissions’ task.) Given the inherently political nature of redistricting, which party controls the legislature can be crucial to a state’s final maps and thus, control of Congress. 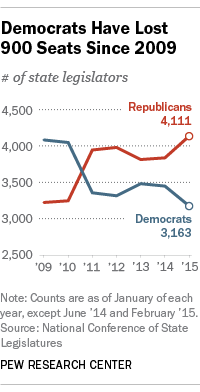 Democrats have “suffered devastating losses at all levels of government” over the past several election cycles, the DNC report noted. According to our analysis of NCSL data, the Democratic Party today has 919 fewer legislative seats than it did in 2009. Democrats control both legislative chambers in just 11 states, down from 34 states in 1982 and 27 as recently as 2010, though that number had fluctuated in the years in between. Meanwhile, Republicans have gained a total of 888 legislative seats since 2009, and control both chambers in a record-high 30 states. In eight other states, each party controls one chamber.

(Our analysis excludes Nebraska’s unicameral legislature, which is officially nonpartisan. However, lawmakers’ affiliations are widely known and reported on in that state, and Republicans appear to have a 35-to-13 advantage, with one independent.)

The Republicans’ big 2010 gains weren’t just in Congress: They picked up nearly 700 legislative seats and won full control of 25 state legislatures (up from 14), putting them in a strong position to influence post-census redistricting. Although they weren’t able to retake the White House in 2012, the party extended and solidified its congressional and legislative gains in the 2014 midterm elections. That “long game,” the DNC report says, is what Democrats need to emulate if they hope to eventually retake the House of Representatives. (Already, Democrats have sought to push the process in their favor where they could, such as in California.)

“The current GOP stranglehold on state houses, governorships and congressional seats is a by-product of more than 30 years of organizing, fostering talent and signiﬁcant ﬁnancial investments at the state and local level,” the report says. “The DNC must develop – and accelerate – programs at the state and local level to ensure that the next redistricting and reapportionment projects encourage Democratic growth.“

With legislative redistricting at a crucial stage, most Americans don’t feel strongly about it

House seats rarely flip from one party to the other